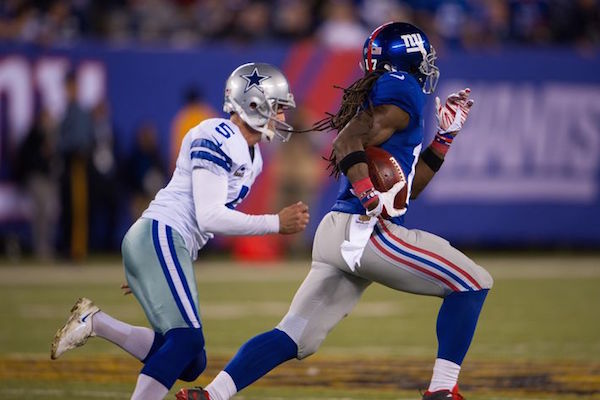 The New York Giants are now 4-3 and stand in sole possession of 1st place in the NFC East after a much-needed win against the Dallas Cowboys 27-20.

In typical Giants’ fashion, the win against the Cowboys did not come easy and took The replays to secure the last minute victory.

“This team has grit and scrappiness, this win keeps us in the hunt. To get a kickoff return at that point of the game was really exciting” said head coach Tom Coughlin.

Harris felt that the Giants we overdue for a return.

”We’ve been overdue for a long time, always one block away, one man away. Tonight it was blocked perfect. Anybody could have ran through that, the hole that was made.”

The Giants defense held their own, forcing some key stops including 2 Dominique Rodgers-Cromartie interceptions, returning one 58 yards for a touchdown. The Cowboys o-line was able to create running lanes as they rushed for 233 yards on 41 carries. Stats for defending to run have fallen far off, as the Giants now rank 21st in the league in rushing yards allowed per game.

The G-men will fly down to the Super Dome to face the New Orleans Saints this Sunday @ 12:00 pm. The Saint are 3-4 and coming on a nice win against the Colts. We all hope the Giants can create a winning streak.