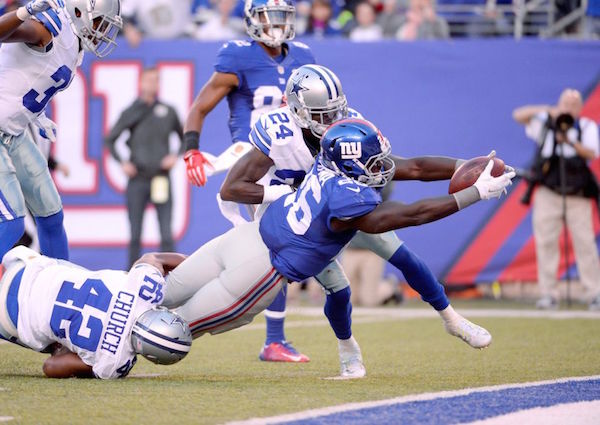 Takeaways From The Giants Win Vs Dallas

Honestly, there is no greater regular season win than beating the Cowboys at home. The best part is seeing all those silver and blue jerseys quietly walk out with their heads down and hands in their pockets. Now that the euphoria of the victory has subsided a little bit, We have to be honest and the Giants still need to improve to win the division. The division is there for the taking!
1. The Defensive line has absolutely no push.
They allowed too many rushes of 4-5 yards. All too often Matt Cassel stood in the pocket over 4 seconds and was able to complete passes. Highlighted by the 30-yard pass play to Witten in the 2nd quarter. These events cannot happen repeatedly. It was not like Big Blue was playing against Troy Aikman and Emmitt Smith. Cassell and McFadden are nowhere near the same league as Aikman and Smith. The 4 turnovers in the 2nd half – none as a result of the d-line. They had one sack the whole game – on the Cowboys final drive (3rd and long). Give credit to the defensive backs…because it was more of a coverage sack. Grade D
2. Jason Witten
this guy is simply the Derek Jeter/David Wright of the Cowboys. He gets open, make catches and gets clutch first downs. He is always in the right place at the right time. He makes a backup quarterback like Cassel look good. Grade B+
3. Ruben Randle
Everyone will remember his ODB impersonation (1 handed 40-yard catch down the sideline). However, he had 3 drops and all three balls were right in his hands. The biggest and what could have been the most costly came late in the 4th quarter. Eli put the ball right where it needed to be and he dropped it. Period. This cannot continue.
4. Darkwa-side of the force.
Have to say what an impressive first half. The first Giant touchdown drive was a result of 4 carries for 41 yards. Besides his TD run from 10, he hit the holes quickly and ran “north and south”. Hopefully, we will see more of him.
5. “The triple play”- turning point of the game.
Starting with Merriweather’s interception on the 1 yard line. Followed by Randle’s one handed 40 yard catch along the sideline. Not to be out-done, Vereen’s 40 yard run inside the Cowboys red zone. A quick three points. However, those opportunities need to be converted into 7 points. The Giants let teams hang around.
The Good
Rodgers-Cromartie- his interception returned for a touchdown was so sweet. Cassel hung the ball out there and R-C took it to the house.
The Bad
The way the Giants use the G-LIne. For fans not at the game …it is a steel drum band with about 10-12 members. They play at various times of the game during timeouts. The Giants organization needs to make it bigger. They need to be a “marching band”. Think people would get into it more. The G-Line is actually pretty good if you get to hear it.
The Ugly
The halftime show- which was performed by the Baja Men, whom are famous for “Who let the dogs out”. What a shock! After decades of the Hawthorne Cabbaleros, (Yes I go that far back in Giants history) dog tricks, and midget football, who would have thought the Giants would put on a concert for half time. Unfortunately, the crowd didn’t even realize it since it was barely announced. In my personal opinion, I still prefer big time Division 1 college marching bands. But it was a rare and nice Halloween treat.