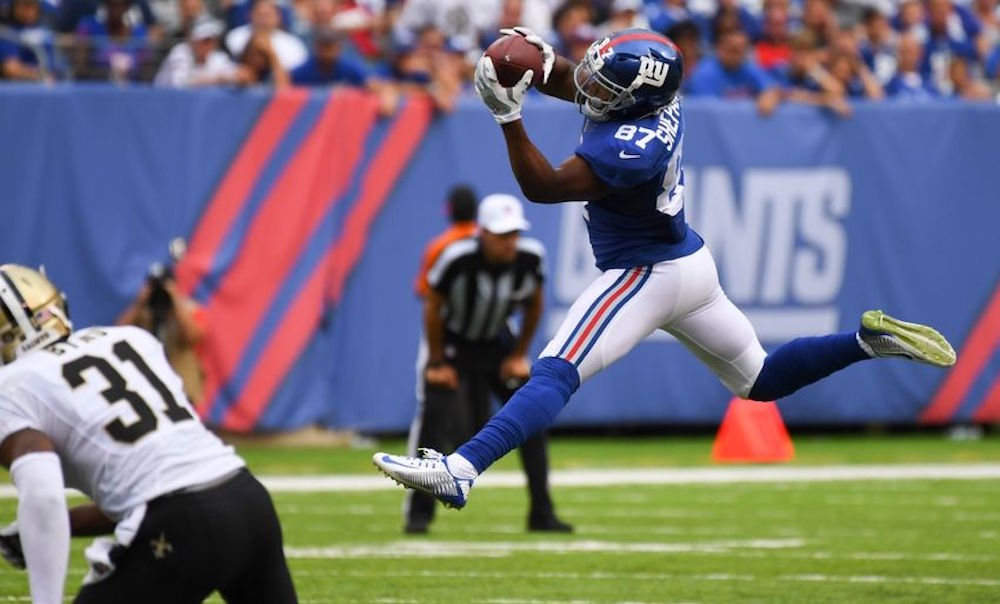 Big Blue Nation prepared itself for a shootout Sunday; one that mirrored last year’s epic showdown in New Orleans that saw Drew Brees tie an NFL record with 7 touchdowns. Our defense’s performance against the Saints last year was most definitely the catalyst behind the $200 million shopping spree that Jerry Reese went on this past offseason. It started to pay real dividends today in East Rutherford.

Bill Parcells and members of the revered 1986 defense witnessed a dominant performance by their 2016 brethren, as The Gmen moved to 2-0 on the season for the first time since 2009, and seizing early control of the NFC East. Second-year safety Land Collins shined early, stuffing a Mark Ingram run for no gain on the 1st drive of the game, and tallying a sack of Drew Brees that would force a punt on the second drive of the game.

The Giants would go on a 14-play, 80-yard drive immediately following. OBJ had two receptions, and drew a 23-yard pass interference penalty that helped bring the football all the way down to the New Orleans 2-yard line. From there on fourth down McAdoo would call OBJ’s number again (immediately after a Larry Donnell drop). Beckham failed to deliver in the back of the end zone, in what would be the first of 4 consecutive squandered offensive possessions.

The latter three would all be fumbles, as The Gmen quite simply refused to honor “The Duke” the way it’s namesake (Giants patriarch Wellington Mara) would hope. First Shane Vereen coughed it up, followed by Victor Cruz after a 40-yard catch and run down the sideline, and into the redzone. Replay would prove that the final fumble, courtesy of Eli Manning, may not have been a fumble at all, as #10 appeared to have his knee down as a result of a sack. The football gods would make sure we were repaid in full…

The Giants defense would stiffen, forcing a 37-yard FG attempt by Wil Lutz. Unsung defensive stalwart Johnathan Hankins would get his big paw in the air, blocking the kick directly back into Lutz’s face, where $85-million man Janoris Jenkins would scoop and score, scampering into the endzone, untouched for the Giants’ lone touchdown on the day.

The second half would belong to Eli Manning. On a day that would show Big Blue’s running game to be largely ineffective, averaging 2 yards per carry on 32 attempts, The New York Football Giants’ all-time leading passer would further his legacy as one of the NFL’s best signal callers. Manning would finish the day 32-41 for 368 yards, passing Parcells’ Patriots quarterback Drew Bledsoe for 10th all-time in passing yards, cementing his status as a Hall-of-Famer.
Manning would respond to Drew Brees’ only touchdown of the day to Willie Snead by leading the Big Blue offense on an 11-play 74-yard drive. Rookie sensation Sterling Shepard was the star of the drive, catching a pair of passes from Eli. Shepard escorted the Giants into the redzone, taking a short pass over the middle 32 yards. Inexplicably, the Giants chose to run it twice on 1st and Goal in spite of the obvious success of the aerial attack throughout the drive. The result? A 19-yard Josh Brown FG, giving the Gmen a 13-10 advantage.

When The Giant would receive the ball back with 2:54 to play, following a Wil Lutz FG that tied the game at 13, the goal was obvious. Make this the final possession of the game. Score, by any means necessary. Send us home happy without having to worry about Drew Brees having an opportunity to have a say in how the game would end. Our defense had played so well, keeping plays in front of them, and wrapping up on numerous tackles; but why take any chances?
An 11-yard pass to Victor Cruz on 2nd and 12, would lead to a clutch 6-yard reception on 3rd and 1 by Sterling Shepard who would cradle the ball for a fresh set of downs. The rookie with the effervescent smile put the finishing touches on his perfect performance, hauling in all 8 of his targets for a team-high 117 yards.

After an OBJ drop on 2nd and 8 that would have given the Giants a 1st and Goal inside the New Orleans 10-yard line, Eli knew exactly what to do. He sent Victor Cruz down the far sideline, and #80 responded with a leaping 34-yard reception at the 2-yard line with 92 seconds to play. The Saints had no choice but to burn the last of their timeouts. From there Ben McAdoo adeptly strategized to kneel down on 3 consecutive plays. Josh Brown booted his 3rd FG of the day as time expired, securing a 16-13 Giants victory, simultaneously exorcising another ghost of the Giants 2015 season. Next up? Josh Norman, and the rival Redskins, and a chance to further assert our early-season dominance!