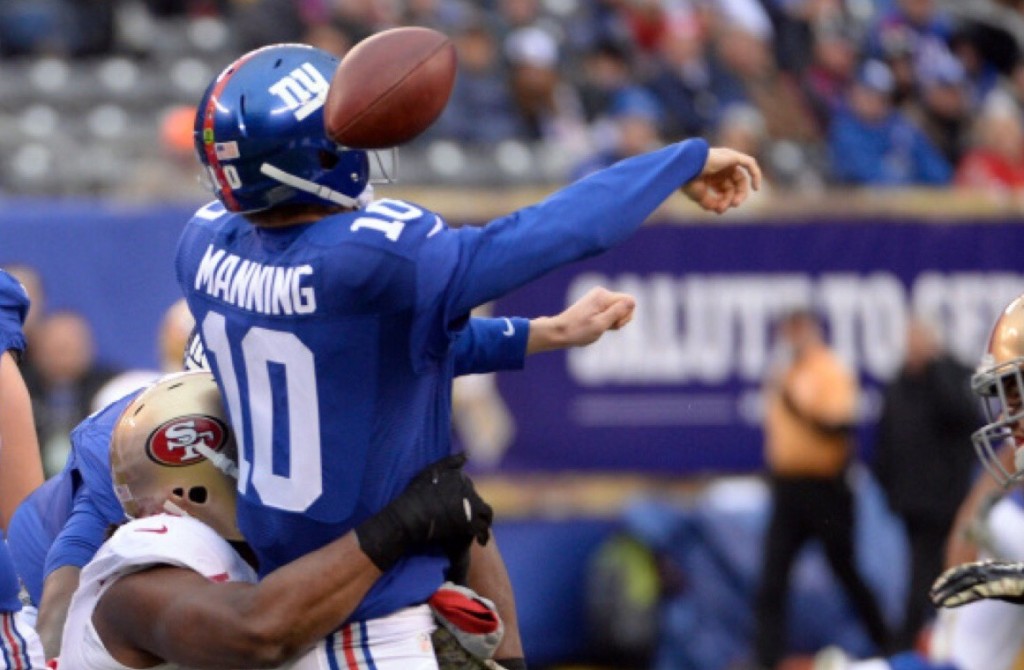 It’s hard not to pin this loss on Eli Manning. Five costly interceptions may have put the nail in the Giants coffin as New York falls to 3-7 in a 16-10 loss to the San Francisco 49ers.

Manning and crew had the ball on the 4 yard line late in the 4th quarter and were unable to punch it in.

Four shots from the 4-yard line – it’s inexcusable that we didn’t score. You’re talking about a team that’s, what, sixth in the league in the green zone? We hit that ball to Larry [Donnell] a number of times and he comes back down on his shoulder and drops the ball. We tried to hit Rueben [Randle] with the first one and [Odell] Beckham with the second one. In hindsight, we should’ve run the ball. We’ve done a good job in the green zone. We’ve done a good job in the tight green zone. It’s just that today in this particular situation – I could be standing here 17-16, but instead we’re standing here with a loss.”

“I was pleased and proud of the way they played. They should have their heads up. They battled. We’ll have another opportunity next week. We can’t feel sorry for ourselves and hang our heads. No one person in the locker room feels worse than another one. You’re not going to win a game turning the ball over five times – I can guarantee you that. We need to bounce back, and now we’ve had a defensive fiasco; we’ve had an offensive fiasco. Perhaps maybe now we’ll be able to go and put something together.”

Looks like another season is slipping away. Cherish the past two Super Bowl wins because they don’t come easy.