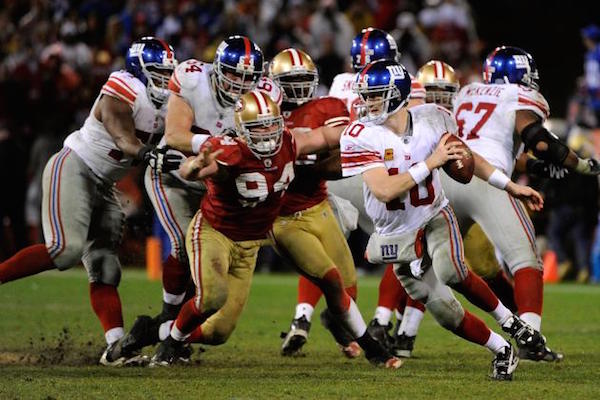 For this weeks State Your Case we asked Tre9er from NinersNation to give us his break down. Lets get to it!

The 49ers season has been a roller-coaster thus-far, with the general consensus being that the team just isn’t playing nearly as well as they should be. There’s really no great excuse for it, either.

Sure, Aldon Smith and NaVorro Bowman haven’t played a single snap to this point. Yes they lost their starting Center in Daniel Kilgore and had to hand the keys to rookie Marcus Martin. But none of that completely explains how bad it’s been at times.

Of course, there’s also been periods of brilliance, showing what we all know this team is capable of. For this reason, most fans are fairly optimistic about his upcoming tilt against the Giants, a team who has also struggled their fair share in 2014.

The 49ers will win the game if:

Against the Rams two weeks ago, the 49ers allowed eight sacks and countless other pressures. Often times that pressure was immediate, forcing Kaepernick to look away from his receiving targets. Granted he could have done a better job at times avoiding the pressure with subtle pocket movement and/or quick throws, but after a while I think he lost faith in the protection and panicked.

The OL rebounded against the Saints and kept Kap clean enough that he was able to do some things in the passing game. Generally if you give him at least decent protection, not great, he’s comfortable, even with bodies around.

The pass rush gets home

Rookie Aaron Lynch has been a terror at times coming off the edge as a pass rusher. However it took him until week seven vs. Denver before he recorded his first official sack. The pass-rush in general has been up and down without super-star Aldon Smith on the field, suspended the first nine games for off-the-field legal matters. Ahmad Brooks hasn’t been the same after coming in overweight and seeming eager to up his penalty total from 2013.

The hope is that all of that changes with Aldon returning to the lineup this week. Teams will have to pick where to give more help: Aldon, Justin Smith, or Aaron Lynch. With the rest he’s had, and the frustration that must come with not being able to go out and do what you do, it seems logical that Aldon would have a coming out party of sorts vs. the Giants. It’s much needed.

The run game gets the chances it needs to succeed

The 49ers are a team that seemingly needs to run the football in order to do anything else well. That may seem like an obvious statement, but even pass-protection and overall OL performance takes a dip when the team doesn’t run the ball enough. Even if there are some poor results early, it’s critical, to this blogger, that they stick with it. It’s a boom/bust offense that relies on setting the defense up with the same looks, then POW – breaking a big run or play-action pass.

This includes Colin Kaepernick, too, who hasn’t been given enough chances to use his legs this season. The 49ers shelved Kap’s ability to run in 2013 too, saving most of it for the playoffs. It seems they suffer from “RGIII Syndrome”, where they fear an injury to their QB, and thus play far differently prior to the post-season.

This tends to hem Kap in the pocket though, and he’s clearly less comfortable when it appears he’s not supposed to run, rather is supposed to stay in the pocket and read defenses all day. It’s all connected, and we hope that the 49ers don’t save too much for a post-season that, if they’re not careful, may never come.

I know the Giants are on a losing steak but it will end this week against the 49ers. You don’t believe me? Well here are my 3 reasons why it will happen.

Keys For Our Gmen to get the win:

Rashad Jennings is back.

Before Jennings was hurt he was one the top rushers in the league. Jennings gives the New York Giants balance on the offensive side of the ball because if you have seen the Giants games since he has been out, there has not been much of a running game. Not only will Rashad Jennings help the running game but he will also give the Giants another weapon in the passing game. Jennings has better hands and has the experience to be a better blocker then Andre Williams and Peyton Hillis. Since he does not have to come off the field no matter what the scenario. The Giants Offense will be less predictable. Better Offense = Giants Win

The 49ers will not have their Pro Bowl middle linebacker for not only this game but for the rest of the season. If anyone has watched the 49ers defense it has not carried the team like it has in the past. One reason for this they were already missing Navarro Bowman that shared the middle linebacker duties with Patrick Willis. These two were a formidable pair that lead the 49ers to one of the top defense in the League over recent years. But this year is a different story they rank in the middle of the league as far as giving up points. The Simple fact is you can’t lose 2 Pro Bowl players that are in charge of putting the defense in the right place to play and not be affected by it. Not as good 49er defense = Giants Win.

The Giants have not been running the ball well since Rashad Jennings has been out which hurts them moving the ball. The Giants not running the ball meant the Giants had to pass the ball more often, which makes them stop the clock a lot more often during the game. Now if the opposing offense has more opportunities then chances are they will score eventually. If the Giants running game improves as it should with Rashad Jennings being back and Patrick Willis not being in the middle, then they will be running more clock and giving the 49ers less time to score.
49ers offense will have less time to score = Giants win.
Andre WilliamsHeadlineRashad Jennings
0 comment
0
FacebookTwitterPinterestRedditEmail

Giants are 16-38 under Dave Gettleman

Giants are 16-37 under Dave Gettleman

My Interpretation is that they will be asking for a hometown discount. https://t.co/sf7FO6mqqR

Reply Retweet Favorite
Reading in between the lines. Gettleman "retires" at the end of the year. https://t.co/YwIqO9C3mn