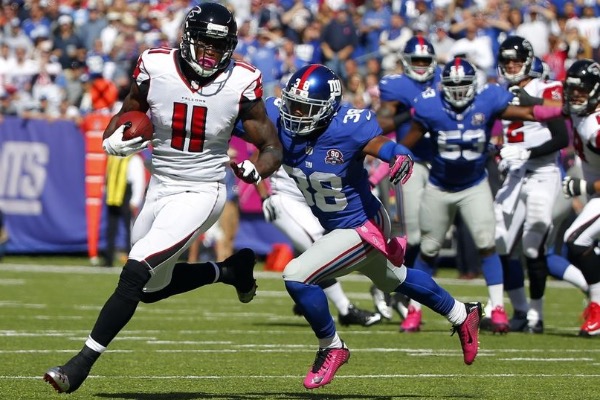 Watching today’s game was like getting a molar extracted from your mouth. As much as you hoped there would be no pain inevitably it was more painful than you imagined.

Simply there are “5 takeaways” from the disaster.

Wide Receivers
First ODB simply can’t do it all himself. What an impressive catch and run for a touchdown. The wide receivers and tight ends were all but invisible. With the exception of touchdown drive that increased the lead to 20-10 Parker, Donnell, and Randle were basically useless. Too many dropped passes especially late in the game. The offense needs Cruz back and quick.

Special Teams
This kid Harris seems to be something special. Twice he “almost” broke it to go the distance. Unfortunately, he lost his footing. Harris also made a nice play, catching the punt at the Falcons 2 yard line. It was wasted by the defense.

The Running Game
Jennings does not get up field quick enough. Shane Vereen was a pleasant surprise. The Giants need to use him more often and not strictly on 3rd down.

Dominique Rodgers-Cromartie
Was having a very solid game until suffering a concussion in what looked like a tough shot to the head. Hopefully he will be back soon Big Blue needs him big time!

Eli Manning
Seemed to be getting into a grove but it all went away quickly. First the fumble deep in Falcons territory was inexcusable. Eli has to put that ball away and get 3 points. Secondly, the delay of game penalty (and almost a second one on consecutive plays) proves their is a disconnect on offense. Those are the times Eli must be elite.

In conclusion the good, the bad and the ugly:
Good- introducing the Super Bowl XXV team at halftime.

Ugly- the penalty on 4th down killing the Giants drive in the 1st half.