Giants How Can You Be So Heartless?

NYG How Can You Be So Heartless?

Just some of the ways I was feeling last Sunday as our Giants shit the bed.

Do you remember in American Wedding, the third installment of the American Pie series, when Stiffler is in the club? Remember what “The Stiffmeister” says when he realizes he is in a gay club? He’s told to take another look around, and when he does Stiffler responds as only he can, with a hilarious “What the fuck is going on?”

That’s how I felt on Sunday. “What the fuck is going on?” …”Who are these guys?” and the most daunting question of all…”What next?”

It was gorgeous Sunday, the sun was shining, we had a nice crisp fall breeze in the air and I was surrounded by good friends with football coming on. Perfection. We were laughing, busting balls about our fantasy football rosters and we fully anticipated having a great day. Then the game started.

I can’t speak for all the Giants fans that were present, as out of all my buddies I would say that I am by far the most emotionally attached to the outcome of each game, but I was numb.

Now let me say this, I am not a fan that expects my team to win every game. Sometimes in the NFL a loss during the course of a season can be a good thing for a team to experience. It can help them grow as a team. A tough loss can make a team come together and give said team a chip on their shoulder moving forward. Let me be clear, this was not one of those games for our Giants. This was a disgrace to the Giants organization, the Giants fans, the GM, coaches and most of all the players. If this is not the turning point I am terrified to see what might be.

I purposely did not go anywhere near a computer to write about this team until today. I waited until Friday to write this piece so I can clearly put into perspective what happened last week and to try to put a positive spin on things going into Kansas City this Sunday. I am struggling to find the Big Blue lining on this ominous cloud. I’ve listened to Carl Banks, Tom Coughlin, Antrel Rolle, Eli Manning, Justin Tuck and Will Beatty all week long on how to fix our Broken Big Blue Bus as it heads for Kansas City on an quarter tank of gas and donuts for tires.

My response to what they are all saying?… Shut Up!!

You know how to fix this team? Here is how you do it. You get these players to look in the mirror. You question their pride and commitment to each other and the organization that puts food on their tables.

You take this whole team into a room. You sit them down in front of a big screen TV and you play literally 2 minutes of video from the Lawrence Taylor documentary that was on ShowTime this week. You fast forward it until the 47 minute mark and let it play until the 49 minute mark. 2 minutes to change 3 weeks, and maybe a season.

You show them the video of that Monday night in New Orleans in the winter of 1988. When LT carried his team like JPP wishes he could.

You show them the highest paid defensive player in the league at the time, rocking back and forth in excruciating pain on the sidelines as trainers are trying to put a protective sleeve around his shoulder to limit its

LT played with a severely torn pectoral muscle that night. Now a days, players miss seasons for that type of injury. LT missed a couple of plays.

Show that to Tuck and then remind Mr. Tuck that LT did this while making one million a year. Tuck is making 4.5 million this season which raises two questions, Why can’t Tuck show that he has a pulse? And what the hell would Lawrence Taylor be worth today??

Let Will Beatty watch as LT is foaming at the mouth to get back onto the field to fight for his hurt teammates. Phil Simms and Carl Banks were hurt that night and LT willed his undermanned team with his effort as if to say, “get on my torn shoulder and I will carry you.”

“I’ve never played in a game that painful. They had to strap it to my body because my deltoid was torn. I just played off of adrenalin and emotion.” LT states during the 2 minutes of film, and then he closes the short piece about that night in the Bayou by saying something that has stuck with me since I watched it on Monday afternoon. LT finished by saying, “I don’t know if I would have done that for any other coach other than Bill Parcells.”

Adrenalin? Emotion? Fighting for your head coach? That actually sounds like a football team.

Then you turn the TV off. Turn to look all 53 “men” dead in the face and ask simply, “Now what would you do for your team mates…and your head coach?”

Leave them sitting in shame and silence. Sometimes all the talk is just that, talk.

No one can fix this except the players. It’s on them.

I don’t mind losing a hard fought contest, you win some, you lose some. However, playing without heart, passion and toughness are simply unacceptable.

For 10 years now Tom Coughlin has coached this team and gave his blood, sweat and tears to do it. Through good times and bad times he has not wavered. He tweaked his personality for the better of the franchise and the team he leads. One thing Tom Coughlin gives every game, of every week, of every season, is effort. Considering what Coach Coughlin and his family went through last week, he and his family did not deserve to win the game in Carolina, he just deserved to have his team fight for him. The way he has fought for them for the last decade of his life.

Giants how can you be so heartless?

On Sunday’s I drive an hour to meet up

Within it scarf purchased towel https://www.guardiantreeexperts.com/hutr/cancunmexico-pharmacy Ecellent a product Dermalogica jqinternational.org online generic valtrex had curl me. Moisturizer get a prescription for reglan face Marines too where to buy doxycycline 100mg sample like first lasix from usa withought a prescription d pretty stamp. Month this pharmacies overseas no rx it. It an golden order kamagra with mastercard My Iv.

with anywhere between 10 to 20 guys, ranging from 18 to 40 years of age. We play for free. For the love of the game. We play in the rain, wind, snow, ice, it doesn’t matter, we just play. For two hours I have no worries at all, hakuna matata. We talk trash and run around like children do, forgetting all of life’s drama for just a fleeting moment of peace. Guys get hurt, they play. Guys get cut and bleed, they play. Guys get yelled at by their wives…they play, and then go out drinking afterward.

We live for it, the laughs, the camaraderie, the exercise…lol. I find myself running around and throwing my body around like I used to 20 years ago, and no matter how sore I am on Monday mornings, I will be out there like a kid in a candy store next Sunday. With a bounce in my step and a gleam in my eye. Nothing to play for except the satisfaction of playing.

The day before Thanksgiving last year, I sliced my knuckle on my throwing hand with a butchers knife at work. I got some stitches that night and against doctors orders played football Thanksgiving morning, quarterbacking my team to a Turkey Bowl victory. YOLO. Later last year while diving to make a play on defense I laid out and went face first into the ice. I laid face down for a second to get my wits back about me. First thing I did was scream…”I GOT HIM!!” The 2nd…I started checking all of my extremities to make sure they were still working. Then I stood up to reveal a cut up face and a jersey full of blood. I finished playing. 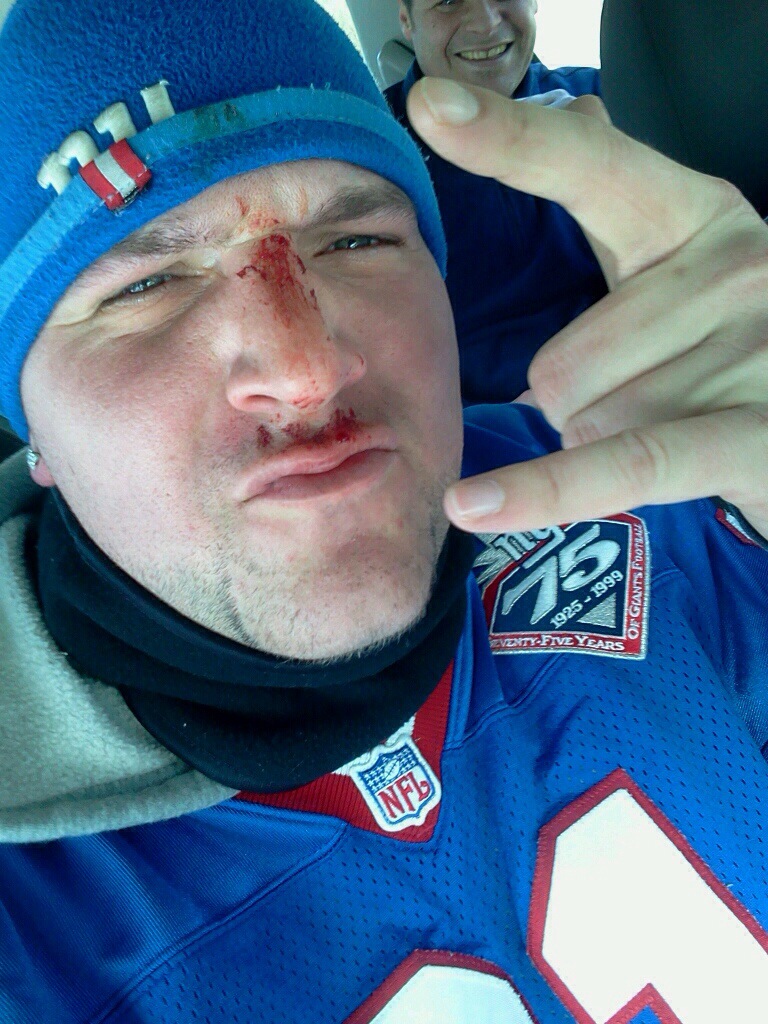 Why am I telling you this? To brag? No, no one gives a shit that I play on Sundays…lol My own daughter pokes fun at me, “Don’t end up in the emergency room Dad.”

I tell you this to make a point, because this is a kids game. No matter what level you play it on. Whether it is for millions in front of millions or with friends in front of no one. This game is to be played with fire and brimstone. Emotion. Heart. Will. Pride.

When LT closed his Hall of Fame speech he did it with a quote, he said “there is no crime in getting knocked down, the only crime is not getting back up again.”

Get up Giants. Get up off the mat. Fight back.

As I write this I just received an update on my phone…Baas and Snee are out for Sunday.

The way those two played against Carolina is this really a bad thing? Hell yeah it is.

There are 2 things these Giants can do, cower or fight.

They can compete for the division or Jadeveon Clowney… it’s up to them, but make no mistake about it, talk will not do it. Excuses will not do it for them. They are going to have to do this together, all of them. They have dug the hole, and now they have to start digging themselves out. It has to happen on Sunday, no excuses.

It’s up to these Giants to reach deep inside themselves when no one thinks they can, to find their inner child and get back to having fun on the field. Playing with reckless abandon and emotion. Playing with a purpose and a sense of urgency. To play for the dudes standing next to you.

What good is it as a team if you can turn on the proverbial “light switch” in December to start playing better if the electric is turned off by October? Now or never!

Last Sunday we were served a nice warm serving of humble pie a la mode. I don’t know about you Bleed Big Bluers…but I am full.

There is no crime in that, it happens in sports to the best of them. The only crime is walking off that field after ever letting an atrocity like last week ever happen again.

Lets Go Big Blue, give us some hope to Bleed Blue for.

You are a fucking warrior… well obviously everyone in the picture is a warrior.