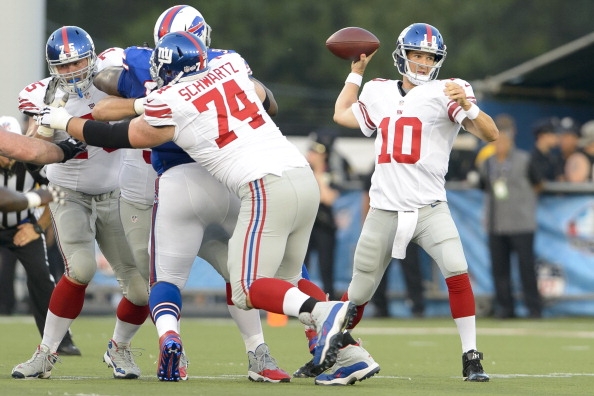 Much is written about the New York Giants this year. This team could easily be 3-0, but in reality this team could also be 0-3. I’ve asked our friends at billsdaily (@billsdaily) to help dissect this team match up in the season.

The Giants o-line shows signs of gluing together. The recent youth movement is gaining confidence and experience as multiple players have stepped up their game. Justin Pugh continues to play multiple positions well. His versatility was noticed stepping into left tackle last week in Ereck Flowers absence. Flowers should be ready to return this week only helping the Giants run game support.

Head coach Tom Coughlin is well aware of the Rex Ryan’s defense they will face the Sunday.

“They’re good, they’re physical, they’ve got good size, they can rush the passer, they can defend the run, the linebacker corps has done an outstanding job, the middle ‘backer had two interceptions the other day, one for a touchdown. That’s a pretty good day’s work,” Coughlin said.

Expect Eli to get the ball out of his hands quickly with short receiving routes. Mixing it up between Odell Beckham and Shane Vereen should keep Bills defense off-balance and open up longer shots down the field.

Taylor has played well his first three games shown the ability to throw the deep ball and create plays outside of the pocket. Losing both Sammy Watkins and LaShawn McCoy (both listed as doubtful) Will make Taylor lean on less reliable options. The Giants defense has done well, causing some key turnovers. Mid game changes in coverage and schemes could confuse Taylor into being less careless with the ball.

The Bills are coming off a confidence building road win against division rival Miami and they feel they can play with any team in the league. Even though they only play the Giants once every four years they have not fared well against them. The game is in Orchard Park where the Bills have a significant homefield advantage. If they do these three things that will help them get their second straight victory.

1. If Tyrod Taylor continues to play like he has so far this season.

Tyrod Taylor has far exceeded expectations so far in his first three career starts. He is the only NFL QB to rank in the top five in completion percentage (74.4%), yards per attempt (9.15) and touchdown passes with 7. They are the third ranked scoring offense and lead the league in big plays with 17 20+ yard plays. If they have similar success against a Giants defense that ranks dead last in pass defense they can build a lead and allow the defense to do what it does best and tee off on Eli Manning.

2. If they make Manning uncomfortable

Eli Manning is tough to sack so they may not bring him down that often but they need to get pressure and make him uncomfortable in the pocket. If the offense continues to hum along than the defense will be able to be aggressive and tee of. They need to confuse Manning with the unbalanced blitzes coming from all angles. That can pressure him into making mistakes that can give the Bills the advantage in this game.

That will allow the crowd to stay very loud which will make communication tough for Manning. That along with pressure will diffuse the impact the Giants talented receiving corps will have on the game especially with the possibility of Victor Cruz coming back to the lineup.

This is going to be considered a tough game for the G-Men. Vegas placed us a six point underdogs. We usually thrive in the underdog roll. Don’t be surprised if the Giants pull the win for 2-2. Please leave your comment below and don’t be afraid to share the post!