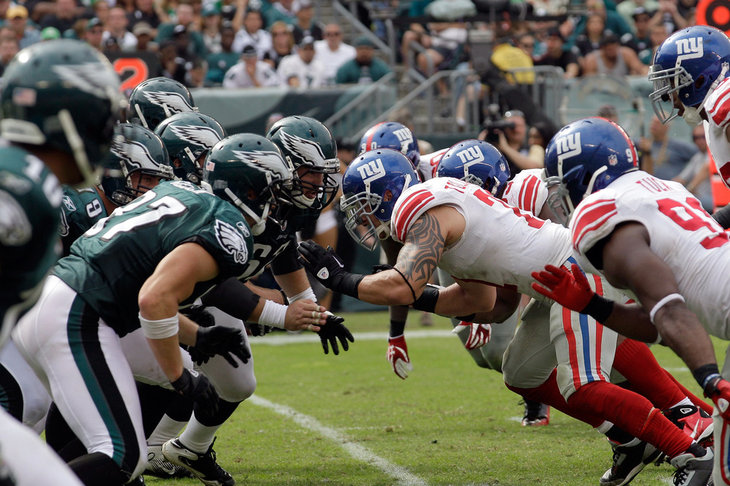 The time has come that the Giants play their most hated enemy in football. There is not much to say about Philadelphia and their fans except they are probably the lowest form of humans on this planet (Puking on a little

girl, throwing snowballs at Santa). The players who don that green uniform aren’t any better. You have Mike Vick almost leading the league in picks thrown with 6, but definitely leading with most dogs murdered. LeSean McCoy is started to sound like he plays for Rex Ryan with the way he is running his mouth and not running on the field; somebody might want to grab the jar of stick’em for him too, two fumbles in three games is not a good look. And finally, Desean “I tanked last season because I wanted to stay healthy” Jackson is sporting a nice big ol’ donut in the TD column. What happened to the Dream Team? Not to mention how they almost got shut out by this up and coming Arizona team, who can definitely prove to be dangerous (No respect and no faith in the team beginning the season, sound familiar Big Blue fans?). The Eagles may be 2-1 right now, but they should understand that their point differential is nothing to call home about.

The G-men are coming off a huge win on the road, as usual, against a team helmed by last year’s rookie of the year. All of the analysts were picking the Giants to shit the bed against Cam and Company, but no. Eli went out there and began to have a little toss with some farm talent who nobody, other than Big Blue fans, knew about. The Pharoah, Ramses Barden, stepped his game up to a whole new level. With Nicks out again, but Hixon back, I still hope that we get to watch this 6’6” monster come in and pull down passes from an ELIte qb. The Giants scored early and often, which not only got me excited, but also began to fluster Cam into trying too hard to get a score. The Big Blue Wrecking Crew was back in full form too, making Cam struggle, picking the ball, taking part in huge hits and pumping up the fans in the stands. One of my defensive favorites, The Octopus, could have just as easily picked Cam off twice on the couple of knock down passes he caused. All in all it was an awesome game to watch and let’s get a repeat tonight.

Andy Reid isn’t too positive about who his quarterback for the rest of this season is going to be. Let’s make the decision for him when Osi “The Ballerina” comes in and drives Vick through the Earth, shattering his spine and Philly fans’ Dreams.