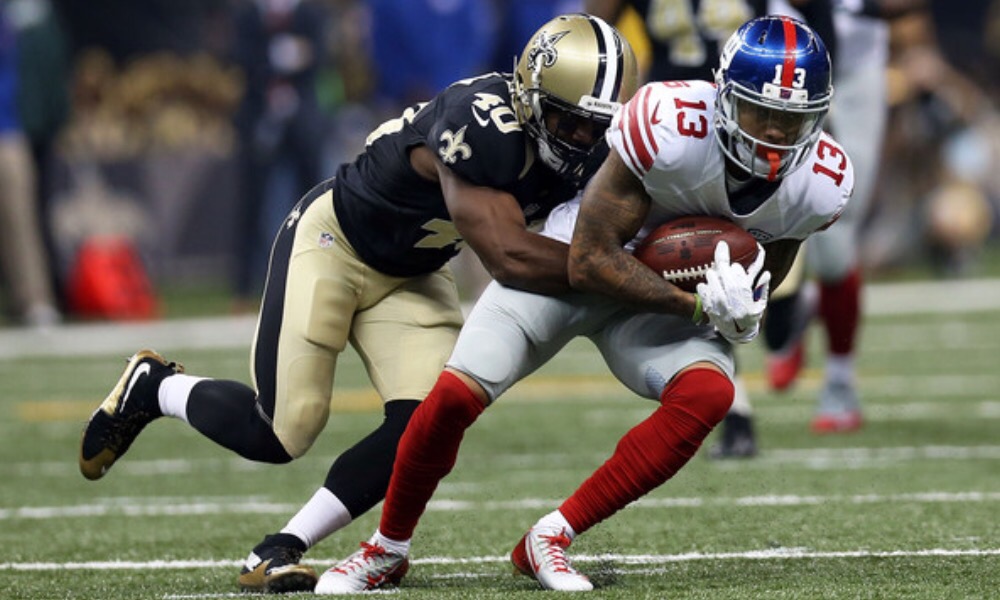 Yes, last year there was an epic shootout. Both Eli Manning and Drew Brees came with guns firing. Sadly the Giants were on the loosing end last year, but that was last year. Things have changed.

Why the New Orleans Saints will win!

For the fans that saw my reasons for a New Orleans Saints win against the New York Giants in 2015, some of my statements will seem very familiar. Drew Brees is still highly-productive, the defense is improving (less obvious to the naked eye or casual fan, and the offensive line is pretty good. But this year, there is more to the story than meets the eye!

Defense wins the day – one way or another!
In 2015, the Saints and Giants found themselves in a shootout with New Orleans emerging victorious from a 52-49 slugfest. The 2016 version will not be without fireworks, but an improved Saints defense will surprise some viewers. After fielding a league worst defense in 2012, then rebounding with a top-5 defense in 2013, the Saints crashed to the bottom of the league in 2014 and 2015. But unseen to many, the team was revamping the much-maligned unit with an injection of you and culture change. The Brandon Browner experiment is over and the Saints now have a young core of CBs (even minus the injured Delvin Breaux) who have shown enough promise to make the team hopeful. Dennis Allen is now the defensive coordinator and former NFL CB Aaron Glenn was brought in to coach DBs. Expect to see improvement in coverage and less of the blown assignments which plagued the Saints in last year’s match-up. If any semblance of a pass rush is present for New Orleans, the Saints will challenge the Giants on Sunday.

Coaching and continuity – Sean Payton has his guys!
There is a running joke amongst New Orleans Saints fans – if you’re a F.O.P. you’re good. Friends of Payton last a long time in New Orleans, sometimes far longer than they should. This year though, FOPs will be a big part of why this team will be dangerous, so Giants beware. Payton is a control freak, this is known. His teams are at their best when he has coaches on his staff who stay in line and do what he guides them to do. Payton has a notoriously short temper with his coaches, defensive coordinators specifically. This year he is surrounded by FOPs and all of the elements are coming together in a hurry. The Saints will win on Sunday because the team will be out for blood after losing late against the Oakland Raiders. A focused unit of Saints players will show up to Met Life Stadium, led by a staff of coaches who are all on the same page for the first time since 2011. This is trouble for the Giants as a blood-thirsty Saints team, with Drew Brees at the helm, is formidable to say the least. In a coaching duel, I’m betting on Payton and his boys!

Drew Brees – any questions?
I’m going to start with a quote from last year

“Drew Brees is still good at football…solid blocking by the Saints O-Line will give Brees the opportunities and vehicle to shred the Giants defense. I’d go as far as speculating that Brees will pass for 300+ and 2 TDs in a close Saints victory. Based on the Saints team who showed to Indianapolis on Sunday, Sean Payton seems to be hitting his stride as well and the combination of Payton and Brees can be deadly when they’re on!”

This will hold true again on Sunday. Brees demonstrated on Sunday that he can hit the long ball by completing a 98-yard TD to Brandon Cooks and multiple long passes to Willie Snead. Both players had solid games against the Giants in 2015 and have actually gotten better. To compound the concern for the Giants defense, the Saints have added stud rookie receiver Mike Thomas (#Shhh) and sneaky good tight end Coby Fleener. If there is any hint of a decent ground game from Mark Ingram, Brees will have more than enough time to turn the Giants defense into Swiss cheese for the second year in a row. Still not convinced? In week one, the Raiders entered their week 1 contest with elite pass rushers Khalil Mack and Bruce Irvin and all they came away with was a strip fumble, which occurred early in the first quarter. So the $200 million dollar defense of the Giants may not have the impact that many expect as the Saints have a solid, veteran offensive line which will be prepared and scheme a way to hold the fierce pass rush of the Giants at bay!

Now, Why the Giants will win.

No cheap runs.
While the stat line against the Dallas Cowboys last week may look blank (0 sacks, 0 interceptions, 0 turnovers) the true test was shutting down the Cowboys offensive line with rookie Running back Ezekiel Elliott to 2.5 yards average.

The Giants DLine will continue to plug the middle, stuff the run, and force Drew Brees into some uncomfortable spots. This year we have the corners and secondary help.

Home Cooking.
Drew Brees and the New Orleans Saints are no road warriors. Last year Brees threw 23 touchdowns and five interceptions at home. On the road Brees had nine touchdowns and six picks. When the dome comes off, the Saints are a different team. Factor in the Giants improved defense, and a 50% chance of rain at MetLife Stadium.

Strengths vs weakness.
The Giants wide receiver group with a healthy Victor Cruz, emerging Sterling Sheppard, and stud Odell Beckham Jr. is a tall order for top corners to handle. Adding TE’s Larry Donnell & Will Tye into the mix only spreads the field.

New Orleans secondary is still in re-build mode. They will ask a lot of their inexperienced corners P.J. Williams, and undrafted rookies Ken Crawley, and De’Vante Harris will all take a shot at Beckham and Co. I’m not so sure they are up to it.