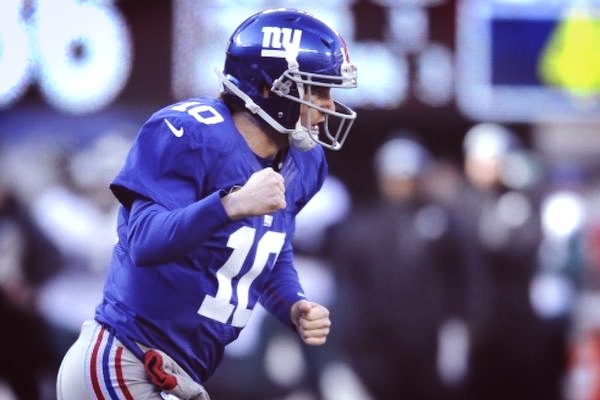 Hey Eli Time To Mann Up

This isn’t going to be one of my long winded rants at all.  Short. Simple. To the point. It’s time… Hey Eli time to Mann up!

Please take 5 min and read this from Pro Football Focus

Pro Football Focus gave Manning a grade of +1.2, including +1.1 in the passing game? That grade, incidentally, was tied with for the fifth-best grade given out by PFF for a quarterback in Week 1. Let’s look deeper and find out the reason for the solid grade. PFF has helped us out here with an ‘Outside The Box’ piece on Manning’s play, in which PFF’s Steve Palazzolo writes “his performance wasn’t as bad as his 4.9 yards per attempt and 53.0 passer rating would indicate.”

Bet the moron that burnt his Manning jersey feels like a douche right about now huh?

Now I love me some PFF.  If you read my articles you know I will reference them in terms of grading a player and his performance quite frequently.  However, in this instance you can take the numbers and shove ’em up your ass.

Am I happy that Eli graded out well and seems to have a better grasp of the offense then we thought at around 10:30 on Monday night?  Yes.

James, how can one man be responsible for 10 other players and how they perform?

Simple.  He is the quarterback.

This Manning started from the bottom and now he’s here. He went from being called “Eli The Terrible” to a two time Super Bowl MVP.  He took down handsome Tom Brady and the Patriots twice. The only NY Giants QB to win 2 Super Bowls.

And then there are things I do not love about Eli.

It is time for Eli Manning to Mann Up!

This offense needs a wake up call stat. And not from Victor Cruz who dances better then he catches passes or gets open lately. Not from Reuben Randle who can’t run anything close to correct route. Not from Odell Beckham Jr. who can’t even run.  Not from the swiss cheese offensive line.  They need a wake up call from their Quarterback.

Obviously, at least according to PFF, who is a more than reliable source, Eli is doing his part.  Other parties are not. Now does Eli need to throw these guys under the bus in the media?  No.

But laying into the next guy who fucks up in front of 55,000 Giants fans today when the Giants take on the Cardinals might get him a standing ovation.  The sleep-walking going on by these players is unacceptable.  Players not blocking, receivers not turning around for the ball and when they do, they drop it, and then have the nerve to ask for more targets…

Sound the alarm Eli…if you don’t right this ship we will be lost in the Big Blue Sea.

The inmates are running the asylum Eli and it is time to take a page out of Nurse Ratched’s book in “One Flew Over the Cuckoo’s Nest” and serve up some “medication time.”

It is time to grab a guy by the facemask and put everyone on notice that missing a block, dropping a pass and running a wrong route is no longer going to be tolerated.  It is time for the players to be held accountable and the only one that can do it is you Eli.  We are holding you responsible this whole time aren’t we?…We criticize you, blame you and burn your jersey don’t we?

It is time for you to get mad Eli. And it is ok to do so Easy E.  I don’t know how you haven’t exploded already…but it is time for Mount Manning to erupt.

If you have to embarrass Randle, Cruz or the schmuks who are blocking for you so be it.

People are coming after you Eli.  The fingers are pointing and the eyes are staring at you, and Eli, if looks could kill?…

Fight Eli.  Curse Eli. Make people uncomfortable Eli.  Sometimes a QB needs to go off on people and I for one believe that this is exactly what this team needs.  There is no edge, no passion…no heart, and it is sickening watching this offense.

It is time for our 2 time Super Bowl MVP to reinvent himself. The Giants are missing something on the offensive side of the ball…some may say talent, I say it’s fire. Some of the most talented teams fall flat on their faces.  Sometimes the right cast of characters, no matter the talent, can come together and make a run if they possess some passion, heart and fight.

We know you got it inside Eli, but it’s time to let it out and see if you can turn this clusterfuck we call an offense around starting today at 1pm.

Enjoy the game and as always Bleed Big Blue!!!!