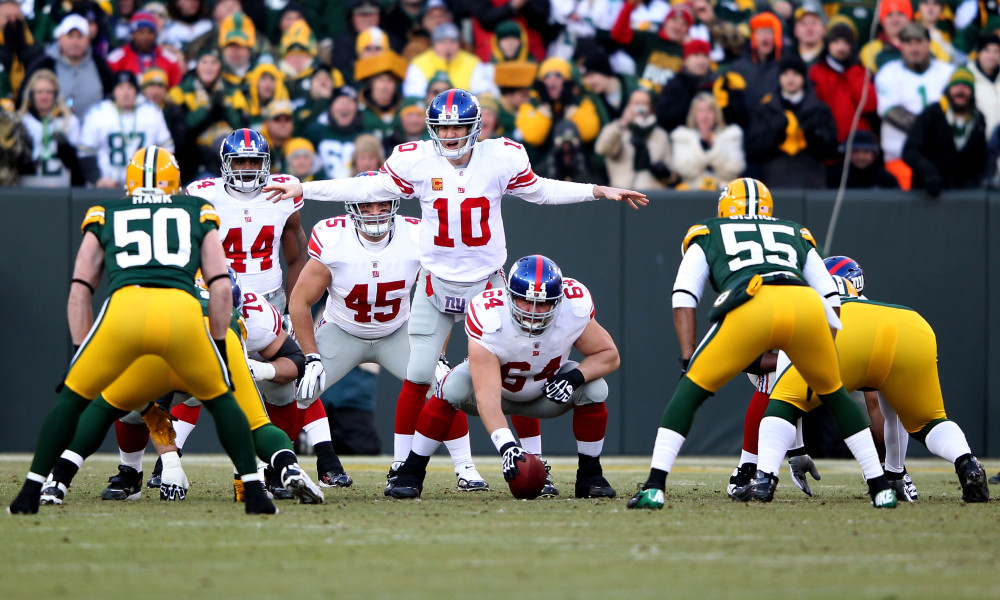 How The Giants Can Steal One In Lambeau Field.

Tonight the Giants will take on the Packers, to help break down this game we asked Ralph Mancini from lombardiave.com for the assist. Lets jump right in.

On paper, Sunday night’s meeting between the Giants and Packers isn’t all that difficult to forecast. Both sides enter this contest considerably weakened in their respective secondaries which should translate into a high-scoring offensive free-for-all that should see multiple skill-position players put up prodigious stat lines.

On the Packers’ end, their No. 1 cornerback Sam Shields is out for the third consecutive week with a concussion that may put him on the shelf for a significant portion of the regular season.

Without him, the defense has allowed Stefon Diggs and Marvin Jones to produce monster numbers against a young and inexperienced group of cornerbacks, including Damarious Randall, who’s allowing 21.8 yards per reception to opposing receivers.

So if the Giants plan on walking out of Lambeau Field with a highly-coveted road win, they’ll need to do it with arm of Eli Manning and his trio of dangerous wideouts, including Odell Beckham Jr., Sterling Shepard and Victor Cruz.

But the purpose of this article is to explain why the boys from Titletown USA will come out on top. Beyond the obvious advantages of playing at home and being well-rested from their Week 4 bye, here are three key factors that will propel Mike McCarthy’s crew to a 3-1 record.

Packers Will Shred the G-Men Over the Middle.

It’s no secret that the Giants are decimated at the safety position as both Darian Thompson and Nat Berhe have been ruled out tomorrow’s game. As a result, Ben McAdoo will once again be forced to go with rookie safety Andrew Adams in the starting lineup.

The former practice-squad player undoubtedly brings an element of physicality to the defensive backfield, but he simply lacks the range to cover shifty slot receivers that can fluidly run in and out of their breaks (hello, Randall Cobb).

Also patrolling the middle will be strong safety Landon Collins, who despite possessing the instincts and toughness to excel close to the line of scrimmage, struggles when asked to drop back into pass coverage.

The fact that Jared Cook is missing another week of action due to a high ankle sprain could work in New York’s favor, but not as much as you’d think with the sure-handed Richard Rodgers running shallow routes over the middle and toward the sidelines.

Rodgers has nowhere near the burst or speed of Cook, but he generally runs to the right spots and pulls in just about every catchable ball thrown in his area code. The Packers will also feature backup tight end Justin Perillo, who despite his boxy frame, is agile enough to haul in passes thrown outside his frame.

New York’s current corps of linebackers won’t be enough to stop the bleeding. Inside backer Jonathan Casillas, in particular, struggles in space and has shown an alarming pattern of missing tackles.

Cole Beasley, Willie Snead, Jamison Crowder and Stefon Diggs have all enjoyed successful outings running inside routes versus the Big Blue Wrecking Crew. Don’t be surprised to see Jordy Nelson occasionally shift over to the slot.

The Giants offensive line doesn’t match up well with Green Bay’s front seven led by Nick Perry and Mike Daniels, both of whom have consistently won their battles up front and forced opposing quarterbacks to accelerate their reads.

After years of inconsistency and an assortment of injuries that have forced him to miss games, Perry looks more explosive than ever by routinely using a variety of power moves to get into the opponent’s backfield. So far, the former USC Trojan has 3.5 sacks on the year.

Daniels, on the other hand, has been using his considerable lower-body strength and leverage skills to overpower defenders and force quarterbacks to drift outside the pocket. The Giants may have to employ double-teams to keep the 310-pound enforcer at bay.

Amazingly, the Packers’ defense ranks sixth in sacks (10) in only three games despite being without the services of all-world sack master Clay Matthews in their last game due to an ailing hamstring.

Matthews is all healed up and ready to go as he will continually flip sides with Perry on the edges in an effort to create confusion for the offense. Rotating in and out of the offense will also be Datone Jones, Kyler Fackrell and grizzled veteran Julius Peppers, who at 36 years old can still use his length and natural strength to plays versus the run and pass.

Look for Matthews and friends to exploit the left side of the Giants’ lines manned by former first-round pick Ereck Flowers, whose sloppy footwork and tendency to narrow his base leaves him susceptible to getting beat in pass protection.

It wouldn’t be a surprise to see Manning once again rush his throws to avoid getting sacked which didn’t work out very well against Minnesota.

It’s Full Steam Ahead with Lacy.

The G-Men have actually done fairly well in defending the run as evidenced by the fact that they’re giving up 3.2 yards per carry to their opponents.

However, their Monday night loss to the Vikings showcased some warts along New York’s front four with the typically solid Jonathan Hankins getting beat more than usual.

Can this be a sign of the Giants’ front line wearing down? Defensive coordinator Steve Spagnuolo has been critiqued for his reluctance to rotate his linemen, particularly at the end positions.

Both Jason Pierre-Paul and Olivier Vernon were on the field for 70 and 74 snaps respectively in their Monday-night loss. Overall, both defenders rank among the top five defensive ends in snaps played during the first quarter of the regular season.

Enter Eddie Lacy, who took ownership of the running attack two weeks ago and pummeled the Lions in the second half with his team playing with the lead.

Unlike last year, the fourth-year running back is demonstrating a new-found stamina. A third-quarter sequence in the aforementioned Detroit game saw Lacy carry the ball on four consecutive plays for 30 yards.

Another reason why Lacy is primed for another strong performance is the presence of Aaron Rodgers and the fact that New York cannot afford to load the box versus the run with arguably the best quarterback in the NFL taking snaps from center.

What’s more, Spag’s unit cannot afford to leave any of their cornerbacks on an island on a consistent basis. Recent free-agent addition Janoris Jenkins struggles with both his timing and balance in covering precise route runners—as we saw last week with Diggs. Things won’t get much easier against Nelson.

Set aside the drama, set aside the “expert” opinions, set aside the insider knowledge. The lone person who can stop Odell Beckham Jr. Is Odell himself. Eli Manning has to look for Odell and get him going early If NYG wants to hit 3-2 record. You have to feed Odell.

Don’t let them fool you. Statistically Odell roughly has the same numbers as he netted last last year, although he has yet to reach the end zone. Look for Beckham to score once, if not twice.

When the Giants added Damon “Snacks” Harrison into the mix with Jonathan Hankings the dedication to run stopping was set. The Giants are giving up an average of 3.2 yards per carry, while Lacey will be a hard task, the G-Men have faired well against some premier backs and lines this year.

If trend continues, expect the Giants hold the run and to put Aaron Rodgers into some 3rd and long situations.

As of today, corners Dominique Rodgers Cromartie and Eli Apple will most likely play vs. Green Bay. The trio of Cromartie, Jenkins, and Apple have held their receivers when all three have been healthy enough to be on the field together. If both do return, they could blanket receivers giving the defensive line enough time to hurry Aaron Rodgers.

This game is going to be tight, and it looks like it’s gonna be a high-scoring one. I like Eli Manning and Odell to show up and squeeze out a victory.