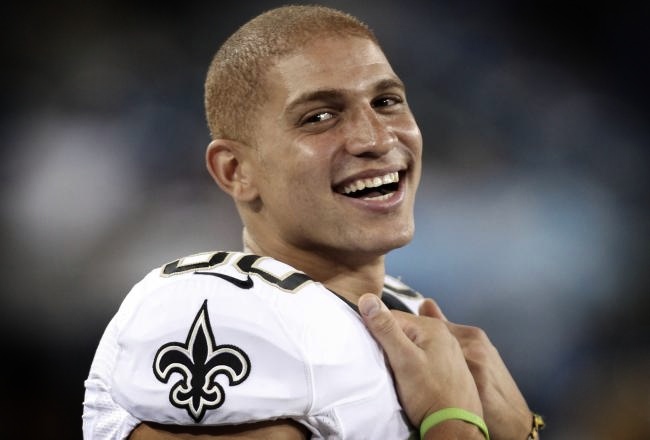 Hybrid Jimmy Graham is a Tight End according to the NFL. I know we are a NY Giants Blog but I want to run with this one. The argument is a simple one. The New Orlans Saints placed a tight end franchise tag on Mr. Graham  which currently stands at $7.053 million. The franchise tag for a wide receiver is $12.312 million. Graham argued to NFL arbitrator Stephen Burbank that he lines up 67% of the time as wide receiver and should command the higher franchise tag.  The NFL arbritration did not rule in his favor.  Below is a small piece  of the arbitration ruling (yes it does mention his twitter feed).

While only a small piece of the puzzle, other NFL players have changed their social bios to play it safe. Jordan Cameron in an awesome move is now a Pro Bowl pass catcher for the Browns. 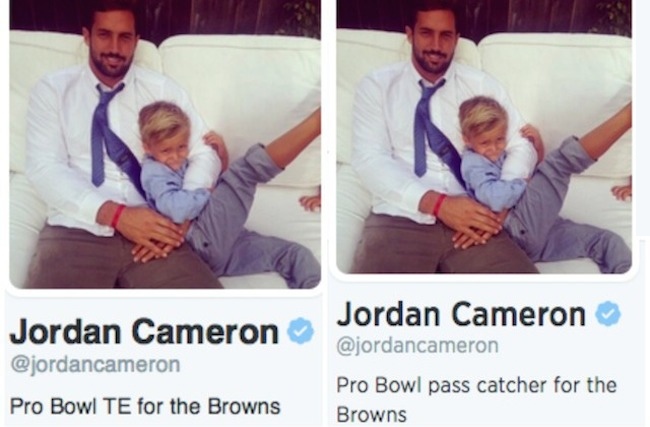 Bombastic Industries Group, aka B.I.G. is full service sports agency they have a different take on how the arbitration should be handled by using the definition of a tight end. (full article here)

Instead of getting caught up in the notion of TE v. WR, an argument he couldn’t win, he should have argued that because he performs both Lineman duties and WR duties, depending on each play, that his franchise tag should be a product of a Lineman plus a WR tag divided by the percentage of time at each position.

Graham & The NFPLA can still dispute Burbank’s ruling on appeals, but the chances of an overturn remain slim at best. If a long term deal between The Saints & Graham are not met by july 15th He will be forced to play under the franchise tag or sit out the season.

I love a good hold out story… when its not involving The Giants.

But let’s think about this from a Giants perspective for a second…On January 26th, our own James Doino wrote an article called “The NY Giants Big BluePrint Part 2″… in that article James mentioned the Giants pursuing Jimmy Graham this off-season and how the Giants should monitor the situation down in the bayou. He wrote…

“What will the Saints do?: https://bleacherreport.com/articles/1925353-saints-must-not-let-jimmy-graham-reach-free-agency

Read the article above and monitor what the Saints do very closely. The idea I’m having is making a move for Jimmy Graham to wear Giants Blue!!! What? Why not? Don’t judge me! If the Saints franchise Graham he could fight it just like Jared Cook did last year with the Titans, (Cook wanted to be tagged as a WR, not a TE), There is a 4.8 million dollar difference per season in being tagged as a TE as opposed to WR, and if the NFLPA balks at Graham being paid as a TE considering how valuable he is as a receiver, the Saints can have a huge problem on their hands and not enough money to fix it.

According to John Clayton of ESPN, the Saints now sit at approximately $12.5 million over the projected 2014 cap of $126.6 million. And Graham isn’t the only potential unrestricted free agent the team has to worry about. Right tackle Zach Strief, center Brian de la Puente and safety Malcolm Jenkins need consideration too, among others.”

Over 6 months later, James was right, as matters have not improved for Graham and the Saints.  The cost is pricey however,  and it will take someone having the “marbles” to move not one, but two 1st round picks to gain Grahams services.  Is that worth it?

Lets take a look why you can make the argument for or against the Giants trading for Graham.

1. The picks.  Two first round picks is a hefty price to pay, even for someone as good as Graham.

2. The cap.  Not only do you have to give up two 1st rounders, but now you have to sign Graham to a long term deal.  The Giants are currently 7 million under the cap, and that is a solid number to be under.  However, trading for Graham means adding another 8, 9 or 10 million per season to the cap.   Is Graham worth that much?…

Hell yeah he is, if you could afford it.  If the Giants made the trade today and signed Graham to a long term deal at let’s say, 5 years for $50 million,  (I’m just throwing this number out there by the way, he would probably take 8-9 million per season) they can easily find the difference of the $3 million they’d be over the cap by extending Rolle and possibly playing with another players contract.  If you told me we can get Graham buy extending Rolle to lessen his cap number and cut a player on the downside of his career like say Kiwi, the numbers would fit for at least this season.

1. It’s Jimmy Frigin Graham.  Adding a player like Graham in this offense, when you look at how Jermichael Finley was used in it for Green Bay, should be enough to start making a convincing pitch as to why the Giants should make the move.  Adding Graham to this offense, with Beckham.Jr, and Randle on the outside and Cruz and Graham in the middle of the field would be a match-up nightmare for defenders.

2. A guarantee or a dream?  The draft is a crap shoot.  You know it and I know it.  And here is my take on the picks, all you hear is this from fans when this topic comes up…”No way I’m trading 2 first round picks for Graham…that’s insane.”

Why is that insane? — If I told you, you can trade two 1st round picks, make the playoffs and compete for a Super Bowl over the next 2 seasons, would you?  I’d sign up for that right now.  Why you ask?…cause the draft has no guarantees.  What is a guarantee is that you would be adding a piece in Jimmy Graham that might make you favorite in the NFC.

The picks you would be looking at would probably be late 1st rounders if the Giants made the trade. So what if I then told you…those 1st rounders would be used on David Wilson, Ron Dayne, William Joseph, Aaron Ross, Tyrone Wheatley, Cedric Jones, Will Allen, Kenny Phillips or Thomas Lewis?  Would you make the trade then?

Those are nine 1st round picks the Giants have made since 1994…in 2005 the Giants didn’t have a 1st rounder.  So as you can see the chance of landing a player in the 1st round that is going to pan out is 50/50.  Graham is a 100% lock, no questions asked, you know what you are getting.

This is a topic we can debate til we are Big Blue in the face, but it is an interesting topic to think about.

We automatically dismiss it because of the picks and the cap, but as you can see, the picks are lottery tickets.  We pick our numbers and sit and wait with baited breath for the numbers to be called out.  Sometimes you win, sometimes you lose.  The cap can be maneuvered and manipulated, especially by an organization as smart as the Giants, never mind that we are 7 million under it as we speak.

We were prepared to sign Hakeem Nicks for 10 million a year until he shit the bed, why not give that to Graham?

Graham is a proven All-Pro game changer.  You don’t find players of his caliber to often in this league that you are able to make a play for.  Teaming Graham with the likes of Randle, Cruz, Beckham. Jr and Manning is something that is not going to be happen, In Reese We Trust, but if it did, we would have a hard time arguing that the reward doesn’t far outweigh the risk.

What say you Bleed Big Bluers?…Would you trade the picks for Graham and sign him to a long term deal?

ManningCast Will Return Next Season

Technology Worries for the NFL Draft

Redskins To Pass on Chase Young?

Birth Of The Gatorade Shower

Jimmy Graham is awesome, no doubt, but why not go after Jordon Cameron???