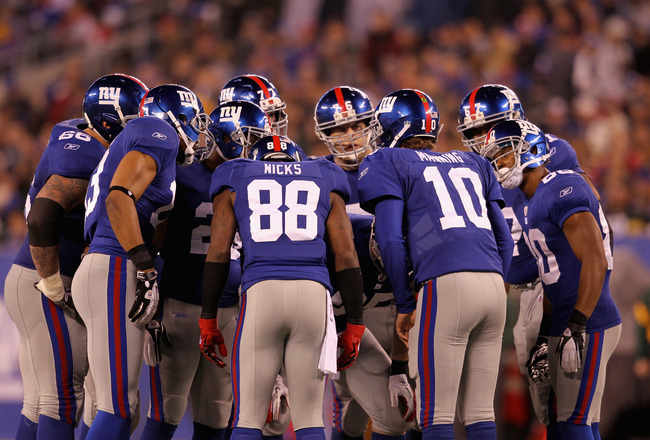 There’s not much to say about the Giants this season. Starting 0-4 in the NFL should basically be a death sentence and leave any team looking to play spoiler for playoff bound franchises for the rest of the season. Luckily, the GMen are in the NFC Least, heading into a divisional game and, miraculously, are only 2 games out of first. The Eagles were firing on all cylinders to start the season. Had 120 plays in the first game and completely revolutionized the NFL. That was until the engine block exploded and Chip Kelly realized he was committing murder by making his offensive line, guys who need oxygen tanks to walk, run suicides whenever they had the ball. Needless to say, both teams are as mangled as a pit bull in the Vick household.
Big Blue was hit in the gut with another injury in the already ravaged secondary. Aaron Ross saw his last snaps of the season against the Chiefs and was put on IR. A ray of hope might shine through though with Will Hill returning after his 4 game suspension (he did play every preseason game and attended training camp) and David Diehl said he’d be back in the lineup. The non-existent offensive line desperately needed him back especially after losing Chris Snee for the season due to his need for hip surgery, hopefully it’s not the end of a great career for the former Boston College Eagle. Finally, on the injury front, Corey Webster is still listed as questionable and is unlikely to play. Giants did pick up Jon Beason from Carolina for a conditional late round pick. Big Blue faithful may know Beason as the guy who was replaced by former Giant, Chase Blackburn. He may see some snaps, but definitely won’t be the main guy since he just joined the squad 3 days ago. If the Giants are going to survive, Eli is going to have to figure out how not to throw interceptions, someone on the

Defensive Tackles into Eli’s spine… It’s a lot to ask for.
Where do you start with the Eagles? Shady McCoy is doing his thing, running all over teams, breaking cornerbacks’ ankles and finding the end zone. Desean Jackson is catching some deep balls and Vick is choking out dogs on the sideline. Still, the Eagles find ways to lose. Chip Kelly was able to change the NFL for one half and then forgot how to coach, I don’t think he even showed up to the Denver game… Which every team might as well scratch unless Peyton breaks his neck again. At least when the Eagles score today we won’t have to listen to that horrible touchdown song.
With Antrel Rolle promising to run the table and Tuck saying he will punch teammates in the mouth, the Giants’ locker room is looking like a huge ball of awesome. Let’s hope they can transfer that psychic and aggressive energy onto the field and continue the turnover fest they had last week. Good Luck Giants, don’t go 0-5 like in 1987 or my liver will never forgive you.