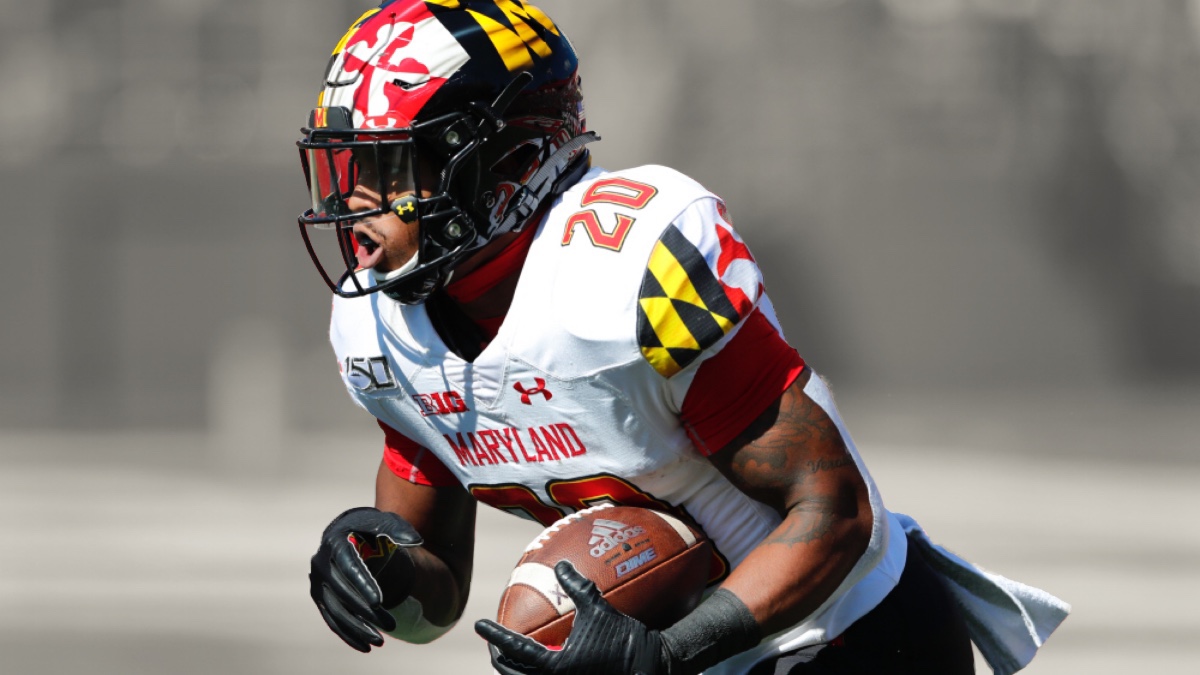 I am sure that many of us Giants fans have found ourselves in the following situation before. It is the end of one NFL season and the excitement of maybe making the post season has been long gone. Instead of focusing on the season that is now lost, we look ahead to the players that are coming out of college and into the draft. Javon Leake, a running back from Maryland, was one of those players in February of this year when he attended the NFL combine.

You probably have also heard analysts say the following, “this player may not have ran fast, but they have in game speed.” Well that is the thought process that may have caused Javon Leake to slip in the NFL draft and become an undrafted free agent. After being picked up by Big Blue, he will be part of a group (including Wayne Gallman and Dion Lewis) that is competing for back up carries behind work horse Sauqon Barkley.

Pros:
Leake was part of a committee of running backs at Maryland.  In the 2019 season he was able to gain 736 yards overall averaging 7.9 yards a carry and 17 touchdowns.  When you watch his highlights, he is much more of an outside threat, and a receiving type of running back. Possibly, a nice weapon to add on third downs.  More importantly, especially in the eyes of Joe Judge, Leake is an animal on special teams.  Leake was named 2019 Big Ten Return Specialist of the year.

He accumulated 804 return yards and averaged 26.8 yards a return during the season.  This also included two that were returned for a touchdown. To say that Leak has some big play abilities is an understatement.  This is a portion of special teams that the New York Giants have not had for a long time.  The last real return man they had was Dwayne Harris, and even he never really lived up to the contract.

Cons:
Lets be honest, if he could not earn the starting role at Maryland that is a concern. If you are not good enough to be a work horse at the college level, the chances of making it in the NFL are even less. More importantly, Leake’s measurables are hardly impressive. His 40-yard dash time was a mere 4.65, and when you have line backers running faster it can be concerning. His vertical jump and broad jump numbers were average at best. As previously stated, there are players who do not test well, and do not look great at the combine, but just play and participate way better on the field. Leake even said in a recent interview, “Game film is a more accurate indicator of my speed”. That is exactly the type of player the Giants have hoped they found in Leake.

He will probably be competing for back up carries most of the season, but the difference he can make as a special teamer could be almost immediate. One thing the combine does not have a test for is hard work and heart and those are both things that previous coaches have said Leake has plenty of. More importantly, as part of a committee, he has plenty of tread left on the tires. As in, he still has plenty of football left to play, and has little to no injuries in the past.

“Javon Leake Player Profile” was written by Guest blogger Christopher Keene Please leave feedback in the comment field below, I would love to know what you think.