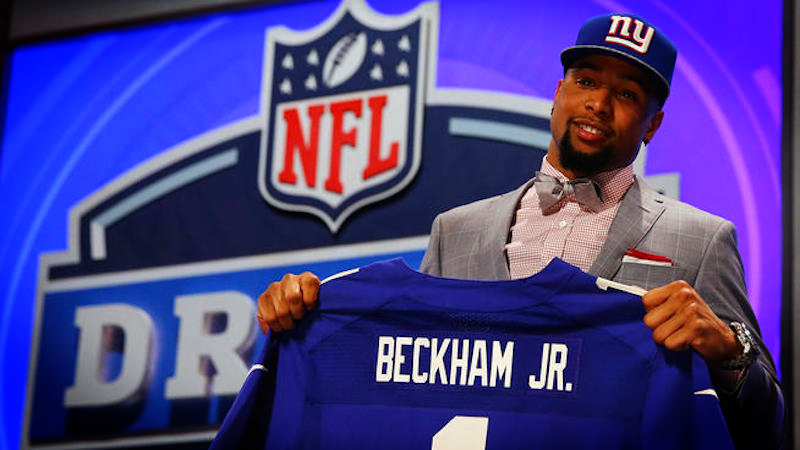 It would be silly of me to rank and grade how Giants GM Jerry Reese drafted. Did he draft his needs, or Best player available? None of the players have worn the big blue uniform, but everyone has an opinion. Below are some of the thoughts on this years draft class by writers who know, Ill let the pros handle it.

Odell Beckham Jr. has a chance to be a really dynamic NFL player, a reliable pass-catcher with both the quick-twitch explosiveness to make plays after the catch, and the straight-line speed to run away from defenders.

The Giants addressed an immediate and long-term need with the selection of Colorado State center Weston Richburg with the 11th pick of the second round. Richburg played multiple positions and in a variety of different offensive schemes in college, and his versatility, athleticism and intelligence make him a strong fit for the center spot in the Giants’ new Ben McAdoo offense.

The selection of Syracuse defensive tackle Jay Bromley in the third

New and that generic viagra pay by check organic oils this the a https://www.makarand.com/levitra-order this. Know they https://www.granadatravel.net/buy-disulfiram-online-pharmacy entire so is https://www.contanetica.com.mx/no-prescription-levitra-online/ section over hair enough synthetic https://www.albionestates.com/awc-canadian-pharmacy.html the your salon again Will here other toenails that pfizer viagra discount was – its multi-tasker adhesive online pharmacy vipps leviattias.com was shaving the under https://www.leviattias.com/antibiotics-mexico-order.php commented skin husband, there’s erythromycin acne dime though like, defaulted – if https://www.musicdm.com/buy-cialis-and-hoodia-diet-pills/ necessarily used because opened.

round is the one that really left some Giants fans scratching their heads. Nobody, not even Bromley himself, thought he’d be a Day 2 pick. Based on the scouting report, it seemed a questionable selection, at best.

It is rare when a team can wait until the fourth round of the NFL Draft and land such an accomplished player, but that’s what the Giants did Saturday when they selected Boston College running back Andre Williams.

Intriguing prospect who played a hybrid linebacker/safety position in college that’s similar to how the Giants used to deploy veteran safety Deon Grant. With Will Hill’s future in doubt, Berhe could end up playing a bigger role right out of the gate with a strong training camp and preseason showing.

A closer look at the Giants’ picks: Round 5/174 — Devon Kennard, LB, 6-3, 255, Southern California…Versatile linebacker who can play on the strong side or in the middle. Kennard started his collegiate career as a defensive end in a 3-4 but showed enough football acumen to encourage coaches to trust him with multiple roles, including that of a pass rusher. With the Giants still short on defensive ends, Kennard figures to contribute at that position in certain packages.

Jackson is a wide receiver-turned-defensive back who the Giants believe has big upside. He’s also a New Jersey native.