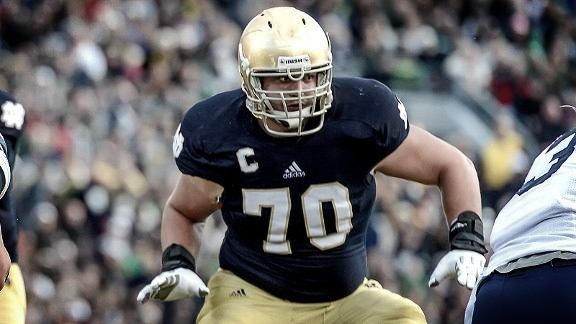 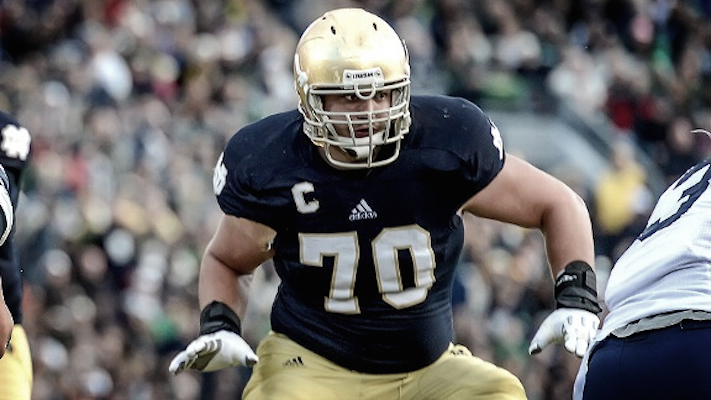 Potential Targets for the 1st 3 Rounds.

Pick 12, Pick 43 and pick 74.  The Giants are in position to grab three of the top 75 prospects in this years upcoming draft, and we can’t miss. #IRWT

In year’s past Jerry Reese and the crew have been given plenty of leeway when draft time comes around, two Super Bowls in 5 years gives you said leeway.  Not this year.  The clock is ticking on Reese, Coughlin and Manning, and the pressure is on, their proverbial backs are against the wall.

This is the biggest draft for Big Blue in 10 years.  And with the talent coming out in this draft class the Giants can’t miss, not with anyone of their first three selections.  Rounds four through seven are up for debate, you can always take a shot on a project, or a player with pedigree that might be coming off an injury or disciplinary issues who’s stock has dropped.  I got no problem with that, but miss with 3 picks in the 1st 74 picks this year and, well, that may cost folks their jobs.  Tic-Toc….

The Giants set the tone this off-season.  Revamping the secondary, adding offensive lineman, depth at linebacker and wide receiver and adding a new toy at running back.  Reese has been plenty busy so far this off season, and it’s all for not if he misses this Thursday.

So who are we targeting?…Well, I think it can go a number of different ways come Thursday night.  Names like Eric Ebron, Mike Evans, Aaron Donald and Zack Martin are being tossed around.  Do we trade up or trade back?…What do we expect when expecting?…Truth is the Giants can end up drafting a TE, WR, OL, DT or a LB.  All areas of need, so what does it all mean and what will Jerry do?

Don’t be surprised if we trade up.  I think the Giants want Mike Evans and will try to move up to get him.  If that don’t work and the price is to steep, I think they would be happy with Eric Ebron or Aaron Donald.  And if all three are off the board, they are fully prepared to take Zack Martin. Considering the talent of the four players in question, I don’t think trading down is an option unless someone unexpectedly drops to 12 and the Giants get an offer they can’t refuse from another team looking to move up.  Then you may see them move back and target a player such as Florida State beast WR Kelvin Benjamin.  As you can see, we have options galore, and adding a quality player who can help ASAP is possible in any scenario.

So, with the information we have at hand, let’s take a look at the 1st three rounds and see who are options may be with said pick.

WR – Mike Evans — Hearing rumors the Giants are kicking the tires on moving up to land Evans, and as long as the price isn’t to steep, IRWT, this is a move that can happen on Thursday night.

TE – Eric Ebron — If I was running the war room, this would be the only guy I’d be willing to trade up for, as I have Ebron ranked higher on my board then Evans.  You may have to get to pick #7 to land Evans, and only three spots to #9 to land Ebron.  Both Evans and Ebron are gifted players who probably don’t make it to 12 without the Giants making a move up the draft board.  If I’m going to trade up, I’d take Ebron…I just think he’s better then Evans straight up.

DT – Aaron Donald — Don’t see the Giants trading up to get this freak DT, but if Ebron and Evans are off the board and Donald is sitting there, it may be hard to pass up the best defensive tackle in the draft, which is also a position of need.

THE PICK — OT/OG – Zack Martin — Polished offensive linemen who can step in and start on day1 for the G-Men.  If we end up selecting Martin, no Giants fan should be upset.  Yes, it’s not a sexy pick like Evans, Ebron or Donald, but it is a very good pick and fit for our boys in Blue.  I think Jerry and the fellas will try to trade up, but if  it costs to much to do so, the pick can be a simple as ranking Ebron, Donald and Martin and taking the one that’s still available.

PICK 43 — Assuming the pick is Martin at 12, WR and TE are in play big time for round 2, with a couple of wild-cards at safety and running back if all else fails.

WR – Kelvin Benjamin — Benjamin (6-foot-5, 240 pounds) is a big target with very good hands, but his attitude is a question. At one of his workouts, he told a coach who had just arrived that he was too tired to work out. He played only two years with Florida State after redshirting in 2011. He ran the 40 in a hand-held time of 4.53 seconds at the combine. — Landing Benjamin with the 43rd pick could depend on what happens with the 12th pick.  If the Giants trade up for or end up drafting Evans or Ebron, forget Benjamin, but if they end up drafting a player such as Donald or Martin, that can put Benjamin in play at 43.

WR – Jordan Matthews — Matthews (6-foot-3 1/8, 212 pounds) had 206 receptions for 2,800 yards over the past two years. He has great ball skills and should catch a lot of passes to move the chains, and no one will outwork him. He ran the 40 in a hand-held time of 4.40 seconds at the combine. — Again, Matthews would not be in play if a WR or TE or selected in round one, but if not, Matthews can get a look, especially if Benjamin is gone.

TE – Austin Seferian-Jenkins — Seferian-Jenkins (6-foot-5 1/2, 262 pounds) is still recovering from a foot injury and did not run or jump for teams in the pre-draft process. The Huskies ran more in 2013, which contributed to him catching only 36 passes for eight touchdowns. He can and will block. He served a one-week suspension last season after a DUI arrest in the spring. — If Ebron is gone in round one, a TE will be selected at some point…Seferian-Jenkins may be the best of the rest.

TE – Jace Amaro —  (6-foot-5 3/8, 265 pounds) will be a tough matchup in the NFL. He caught 106 passes and seven touchdowns last year. He wasn’t asked to block a lot at Tech and will need work in that area. At the combine, he ran a hand-timed 4.63 seconds in the 40, but his stock dropped a bit after he interviewed poorly. He also has had some off-field problems in the past.

RB – Bishop Sankey — Sankey (5-foot-9 1/2, 209 pounds) has good quickness and running skills and will work hard on every play. He ranked No. 1 in the nation last year at breaking tackles. He has good hands and can be an every-down back. At the combine, he posted a hand-timed 4.45-second 40 and 41 1/2-inch vertical. — I know RB is a dire need at this point, but with questions mark surrounding David Wilson, if all options are gone and Sankey is the highest player on your board, he can be a steal here at pick 43.

Safety – Deone Buccanon — Bucannon (6-foot 7/8, 211 pounds) has above-average ball skills for a safety and provides good support against the run, with 13 interceptions and 300 tackles in three years. He’s a physical player with 4.5 speed and should also be good on special teams. — Yeah we revamped the secondary, but if Buccanon  is there at 43, and Will Hill is still impersonating Cheech and Chong, selecting Buccanon would be ideal.  In my opinion, this is the 2nd best safety in the draft.

The Pick — Can go a bunch of ways here as you see…but I’d target Benjamin.  Might be better to stay put at 12 and select Martin, and then trade up into the early 2nd if possible to select Kelvin Benjamin.  If not, pencil in Amaro or Seferian-Jenkins.

Pick 74 — Really all depends on who is here, there are always surprises on draft day. People are selected to early, or in some cases player drop like a stone.  Here might be a couple of guys we can target in round 3.

TE – Troy Niklas — Niklas (6-foot-6 1/2, 268 pounds) is a three-year player who played linebacker in 2011 as a true freshman. He can block and catch (32 receptions, 498 yards, five TDs in 2013) and is very athletic. He has not run for teams after having double-hernia surgery in March. — Assume Ebron, Seferian-Jenkins and Amaro are gone, the Giants need to find a way to land Niklas. Not coming away with one of these players in the 1st 74 picks would be discouraging, as all for look like they will be very productive players in the future.

C – Travis Swanson — Needs to get stronger at the point of attack, but brings experience and competitiveness that may get him picked right around #74,

WR – Donte Moncrief — Terrific size. Smooth accelerator — jets off the line, eliminates cushion and has speed to stretch the field vertically. Good balance and body control. Can stem his pattern and leverage defenders. Drives off cornerbacks and creates separation. Knows where the sticks are. Outstanding leaping ability to elevate and pluck throws out of the air. Flashes playmaking ability. Able to sidestep the first tackler and pick up chunk yards after the catch. Gives effort as a blocker to engage and seal. Has experience going head-to-head with NFL-caliber cornerbacks. Will be a 21-year-old rookie and has upside. Tied for the longest broad jump (11-foot) among receivers at the combine.

WR – Martavis Bryant — Superb body length with a long, rangy frame. Very good straight-line, separation speed. Can drop his hips surprisingly well for as tall as he is and is fairly shifty after the catch. Good red-zone target — effective making back-shoulder catches. Flashes the ability to climb the ladder and highpoint the ball. Has return experience. Needs to improve his hands to be more consistent.

LB – Kyle Van Noy — Has a muscular, well-proportioned build. Quick get-off. Knifes gaps. Good pass-rush ability — can push the pocket or pressure the edge. Keeps working to the quarterback and has deceptive closing speed. Eyes the quarterback and tries to get his hands in the passing lane. Athletic with good movement skills in all directions — equipped to keep pace with backs and tight ends in coverage. Is rangy and can open up his stride and run vertical. Glides on the field. Scheme versatile. Football smart.

LB – Chris Borland —  Is built low to the ground and bends his knees. Keen eyes and instincts — has a nose for the ball. Quick to fill downhill (see goal-line play vs. Ohio State when he stuck RB Carlos Hyde in the hole and drove him back). Motor runs hot — pursues hard and seldom quits on plays. Flows well laterally. Aware in zone. Capable of bringing pressure as a blitzer. Good leaping ability. Intense competitor who loves to play and it shows. Defensive playmaker — piled up 50 career TFL and 14 FFs. Special intangibles.

The Pick — I got a soft spot for Borland, who despite his athletic deficiencies, is a straight up old school football player who can  produce for Perry Fewell and on special teams from day 1.  Again, all this depends on how Reese attacks the 1st 2 rounds, his picks through two rounds will determine who is in play and who is not come round 3.

What say you Bleed Big Blue?…Who did I leave out? Who have I targeted that you agree with?….Again, anyone who tells you it’s a forgone conclusion who will be selected at any given pick is lying…one trade up or down changes everything.  One thing we can expect is Reese to bring his A game come Thursday night, and he damn well better. Tic toc…The Giants are now on the clock, In Reese We Trust.