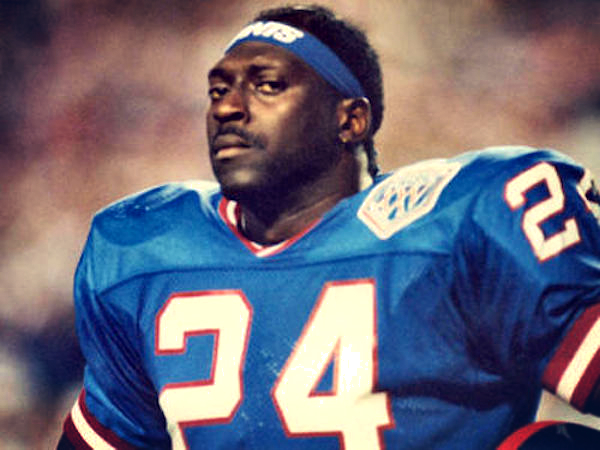 On Super Bowl Sunday every Giants fan was filled with Big Blue pride when Michael Strahan, was elected to the NFL Hall of Fame. He is election was well deserving and his accomplishments have been well chronicled. I personally want to congratulate him! However, it got me thinking…

What if I told you there is one former New York Giant also deserves to have Hall of Fame honors. Who is it? Think hard! Answer: OJ Anderson. Shocked? Before you LOL…take a moment.

OJ Anderson retired in 1992, at the time he was ranked 8th all-time in rushing (10,273 yards) and 7th all-time in touchdowns with a career total of 86. He has more rushing yards than long time Hall of Famers, Gale Sayers, Frank Gifford, Larry Czsonka, Jim Taylor and Earl Campbell.

I know people will say he is only 26th on the all-time rushing list now. But the explosion of running backs reaching 10,000 yards has been in the last 10 years. Players like Adrian Peterson and Corey Dillon have benefited from rule changes that benefit the offense. OJ played in era with stifling defenses like the ’85 Bears, Doomsday, and the Steel Curtain which only proves how impressive it was for him to get to 10,000 yards and make it as high on the rushing list as he did.

truly most memorable Super Bowls moments. He is only one of 4 running backs to earn the MVP Award in the Super Bowl. Who are the other three? Franco Harris, John Riggins and Emmitt Smith (twice) last I checked all in the Hall of Fame.

Anderson not only was a dominant rusher he had 376 catches for 3,062 yards. Twice he was named to the All-Pro team. Big Blue definitely deserves one more hall of famer…even if he is shared with the Cardinals.

better yet, we could just have a blanket induction for anybody who ever played on a giants super bowl team!