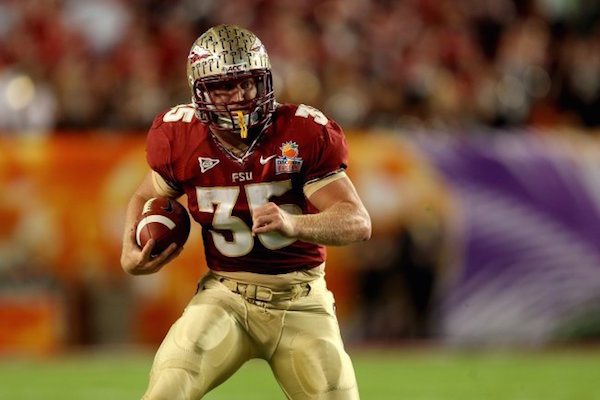 O’leary Would Fit Nicely As A Giant

As the draft approaches all serious fans become draft experts and I consider myself no exception to this rule.  Certainly I do not have the time to watch every college team all over the country and choose the best of the best so I rely heavily on the few teams I’ve followed and the many article I’ve read and of course sportcenter highlights.  There from my totally bias and un vast research I’ve concluded the right guy for our team is none other than the TE from my Alma Mater FSU’s Nick O’leary.

Now I’m not saying we should draft him with the #9 pick especially since he is rated the #4 TE according to Sports exchange.  However I believe if we can land him in the 2nd round or later he will be a high value pick that will improve out red zone offense immediately.  At 6’3 247 lbs he has the best hands I’ve seen in a college TE and seemed to catch everything that “Famous” Jameis Winston threw at him during his college career and has been a major part of FSU’s success over the last few seasons.  He’s tough and I think over time he will be an efficient blocker at the position as well.

Don’t get me wrong I like Larry Donnell and feel he will continue to improve, but I think the trend in the NFL is moving toward having two TE on the field in many situation’s especially inside the twenty yard line where our offense struggled last season.  I believe we have to improving our offensive line and defense should be top priority but like Marco pointed out in his article that Reese doesn’t like to pass on playmakers and I believe we can add instant punch to the offense and big crunch time playmaking ability outside the first round with the addition of Nick O’leary who I watched time and time again make plays for big 1st downs and key touchdowns in critical moments for FSU.

Here is a scouting report on NFL.com on him. At FSU he played in 53 games, he had 114 receptions for 1591 yards and my favorite statistic as it relates to the Giants is he had 17 Touch Downs.

“O’leary Would Fit Nicely As A Giant” was written by Guest blogger Shane Momier. Please leave feedback in the comment field below, I would love to know what you think.