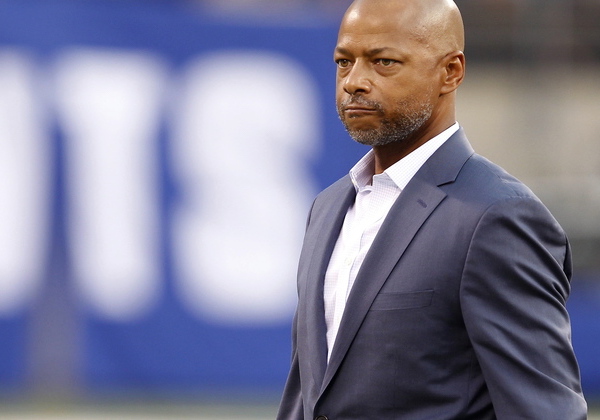 Don’t be surprised if Jerry Reese drafts wide receivers with the 9th pick of the 2015 NFL Draft. I’ll give you a few reasons to chew on.

Anytime there is a dynamic playmaker up there and a guard, I’m taking a playmaker. – Jerry Reese.

It may be too tempting to pass on Alabama’s Amari Cooper or West Virginia’s Kevin White, who are both predicted as top 10 players. Yes we need help at OL & DL but adding another weapon to Beckham, Randle & Cruz has some fans drooling.

Now let’s look at the history of Jerry Reese’s tenure as General Manager. He has selected a total of 7 wide receivers. This would be the second highest drafted position behind linebacker which has 9. All of  the wide receivers selected have been drafted within the first 3 rounds.

Odell Beckham Jr.
2014 | 1st round | pick 12
Odell was the first New York Giants to win Offensive Rookie Of The Year with his amazing breakout season. Nice start with 91 catches and 12 TDS.

Rueben Randle
2012 | 2nd round | pick 63
Solid wide receiver who is evolving. At times inconsistent, but his role is always changing between primary and secondary wide receiver. His second year under offensive coordinator Ben Mcadoo’s system will be telling.

Jerrell Jernigan
2011 | 3rd round | pick 83
Show some bright spots in 2013 especially at the end of the season. Spent the majority of the season on injured reserve.

Hakeem Nicks
2009 | 1st round | pick 29
Was our premier Stud wide receiver with exceptionally strong hands, he commanded to double-team freeing up other members. He struggle his last two years with the Giants to stay healthy. Eventually he left in free agency to join the Indianapolis Colts.

Ramses Barden
2009 | 3rd round | pick 85
Jerry Reese was high on Ramses Barden and actually traded up in the draft to get him. Similar size and frame to Plaxico Burress but never panned out.

Mario Manningham
2008 | 3rd round | pick 95
Manningham caught 18 touchdown passes in 4 seasons with the Giants. He also left in free Agency but injuries mainly kept him on the 49ers PUP list.     Now he is mainly remembered for his sideline catch in Super Bowl XLVI.

Steve Smith
2007 | 2nd round | pick 51
Was Eli’s main target in 2009. He racked up 107 catches for 1220 yards and & 7 TDS becoming the first Giants receiver in history to break 90 catches in one season. One bad knee injury and one impulsive jump during free agency landed Smith with the Eagles and never returned to his old glory.

In summary Jerry Reese drafts wide receivers, and he drafts them well. Now keeping them on the team or keeping them healthy is another story.