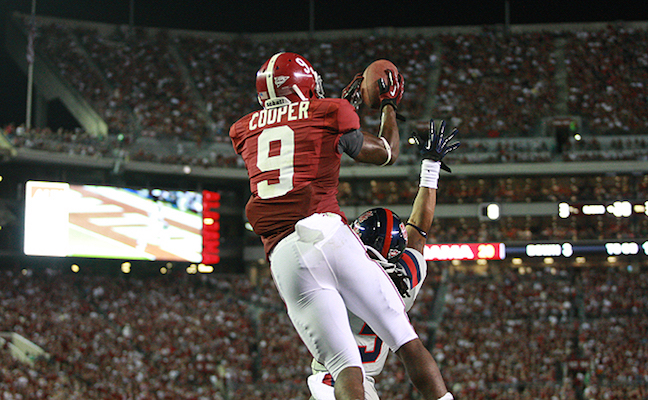 Should The Giants Look At Amari Cooper?

Should The Giants Look At Amari Cooper? Cooper is projected to be the first Wide Receiver taken in this years upcoming draft. We can safely say The Giants will be slotted pretty early in the draft for 2015. The Giants have tons of holes to fix, but its tempting to picture Beckham, Cruz, Randle & Cooper. I know you are already screaming for them to draft an Offensive linemen, but this years class of offensive linemen might be poor. Could the Giants have the same plan as last year, Grab a stud WR in the 1st round & O-line in the second. NFL Hall of Fame Wide Receiver Chris  Carter believes in the talent of Amari Cooper, should we?

I don’t know what he’s going to do in the pros, but since Ozzie Newsome, Alabama has the best wide receiver that they have had in the history of their school and his name is Amari Cooper. He is a true junior from Miami and he is fabulous. His ability to run routes- I met Amari when he was in high school at a football clinic and he’s probably the most advanced wide receiver that I have seen at a young age since Randy Moss. He has unbelievable speed, unbelievable demeanor, route running, the sky is the limit.

I think right now on Mel Kiper’s Big Board he’s number three, but he could be the first pick in the draft as a wide receiver and he has everything from a character standpoint that you would on and off the football field. One reason why the University of Miami is not good is they’ve got kids leaving Miami in their backyard going to play for places like Alabama. Amari Cooper, he’s worth the price of admission.

Take a look at some of highlights of Cooper Below.