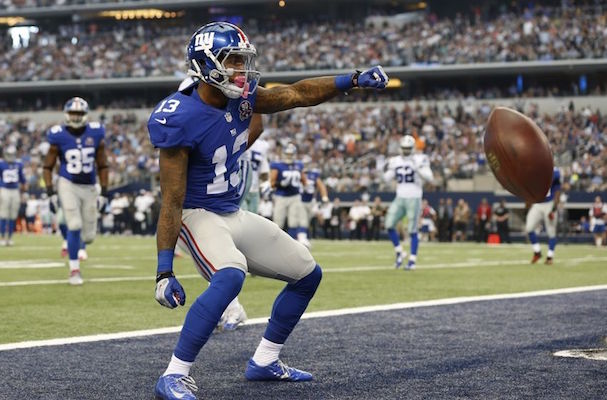 As the New York Giants’ 2014 campaign is coming to a disappointing end without a playoff birth for the fifth time in six seasons. Despite the poor performance this season there are pieces on the current roster that give the Giants hope for the future. Here is New York Giants: 5 Reasons for Optimism in 2015.

If there is one player that gives Giants’ fans most enthusiasm for the future it is the wide receiver who in only ten games played has broken the Giants team record for most receiving yards by a rookie. The explosive, dynamic receiver has already made numerous unbelievable plays, exemplified by his one-handed touchdown catch against Dallas, which landed his game-worn jersey in Canton. Yet to play a full season, Beckham Jr. has already broken several team and league rookie records. He has at least 90 receiving yards in each of the last seven games, the longest such streak ever by both a Giants player and an NFL rookie. Also, he has three games this season in which he caught at least 10 passes, making him the first rookie in history to do that. Along with the statistical feats, he has already developed great chemistry with Eli Manning and should continue to be his favorite target moving forward. His incredible skillset and unparalleled talent make the prospects of him playing alongside Victor Cruz a scary thought for defenses around the league next season.

Should The Giants Look At Amari Cooper?