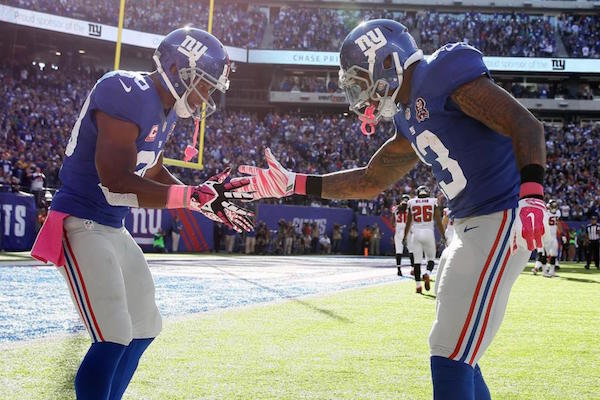 The NYG 2014 season kicked off w/a Big Bang! A top 1st round NFL draft pick Odell Beckham and GM Jerry Reese finally pulling the wallet out of his sock taking the rubber band off to spend money in the free agency. Acquiring top prospects such as DRC, Jennings, Schwartz, and Thurmond. Let’s not forget top OC McAdoo bringing in his “west coast flair”.
Such high hopes and expectations for the Giants this season which resulted in frustrated players and fans taking to social media bashing everyone from Eli, Coach Coughlin, OC, DC, Jerry Reese and even the grounds crew at MetLife Stadium. Every NFL week the Giants suffered more starting players getting injured. The biggest injury came was when the “heart”of the team Victor Cruz unforgettable injury 🙁 as NYG loss Cruz for the season and a Zero scoring to the Eagles. Week after Week the losses mounted up as the injuries mounted up. As rookies like Beckham, Donnell, Washington and Parker took the field trying to salvage some type of spark in a rather dismal season. NYG and fans didn’t know what to expect from Beckham with him missing training camp, no preseason games, and a few regular season games. He rose up to the challenge by having an explosive outstanding rookie year brining some kind sparks to our giants sad horrible season.
With only 2 games left the Giants is playing for pride and to finish in 3rd place. A NYG championship is crossed off my Christmas list this year. As we go into 2015 all NYG fans are looking forward to major changes and seeing Victor Cruz and Odell Beckham Jr. playing on the field together. Just to see “O” whip dance & Cruz “salsa” in the endzone would make for a great Christmas gift next season!

We are gearing up for the off season, and looking for some new blood to contribute to this site. Victor Cruz and Odell Beckham Jr. was written by Guest blogger G-Diva Joce Brown. Please leave feedback in the comment field below, I would love to know what you think.