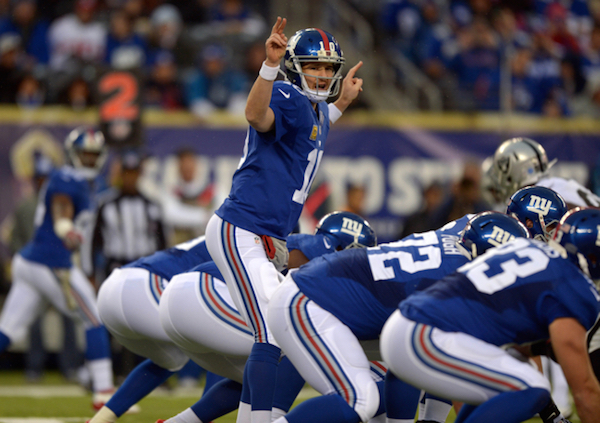 If there is one thing you can always count on when it comes to Giants Football, it’s that every season is going to be a roller coaster ride. One minute you’re as confident as ever, and the next you’re scratching your head. With 2014 almost in the books, this underachieving Giants team has a lot to look forward to in the coming years. The current 4-9 record seems to overshadow some key bright spots that were major question marks in the beginning of the season.

Starting with the offense, the biggest question on everyone’s mind was how Eli Manning and the offense would respond to Ben McAdoo’s West-Coast scheme. Manning’s transition has been somewhat slow, but week after week it’s clear that this is the offense he is meant to run. With a completion percentage slightly over 63%, Manning is on pace to eclipse the 4,000 yard mark for the fourth time in his career. With 26 touchdowns and two games remaining, it’s quite possible he could reach the 30 touchdown mark for only the second time ever. In addition, his current quarterback rating of 90.0 would be the third-best of his career and best since 2011. Factor in a below average running game along with losing his best receiver in Victor Cruz, Manning seems very comfortable in this new scheme and it’s possible his best years may still be ahead of him.

O’Dell Beckham Jr. Enough said. The first-round pick out of LSU has been nothing short of spectacular since joining the team in week 5. In the last seven weeks alone, Beckham’s 61 catches and 866 yards are both tops in the NFL. His recent 12-catch outing for 143 yards and 3 (could have been 4) touchdowns against Washington just about sums up his all but dominant rookie season. Throw in an absolutely historical catch week 12 against Dallas and you have the perfect recipe for a sure-fire All-Pro in the near future. Beckham and Manning are clearly on the same page, and being able to switch into the slot when needed only adds to his firepower. It’s going to be very exciting to see the damage he can do when Victor Cruz is fully healthy.

While the rest of the offense is nothing to get extremely excited over, there have been some bright spots from unlikely players. Weston Richburg, a versatile offensive lineman in his rookie year out of Colorado State, has shown a lot of promise as far as moving around the line and getting the job done. Andre Williams is another rookie thrown into the fire and is holding his own. The 4th round pick out of Boston College was a very highly touted running back at the college level, and was even a heisman finalist in 2013. Initially rotating in with Rashad Jennings, Williams took over the job when Jennings went down and has done a fine job. On pace to finish with about 700 yards and 7 touchdowns, I think anyone would be happy with that out of a rookie.

All in all, the defensive woes and an inconsistent offense have really put a damper on this 2014 season. With that said, when this Giants offense clicks, you see a small glimpse of what can possibly become one of the leagues most dangerous offenses as long as they stay healthy and avoid mistakes. Jerry Reese is an excellent General Manager, and the Giants faithful should have all the confidence in the world he will do everything he can to make this team a contender once again.

Manning And Friends A Promising Future On Offense  was written by Guest blogger Brian Lazor. Please leave feedback in the comment field below, I would love to know what you think.