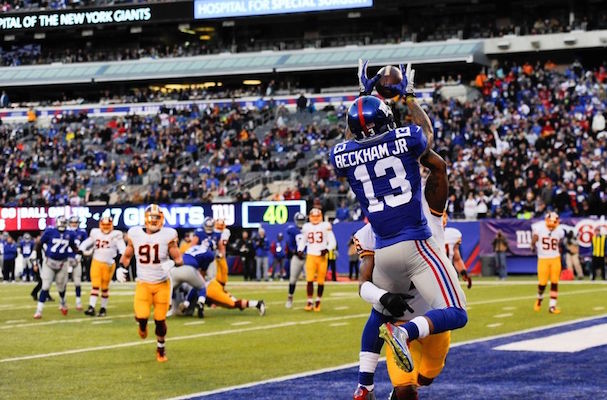 As NY Giants fans, I think we can all come to conclusion that our season is over, even if we have two more games to play. There was never a dull moment with NY Giants played against Redskins, from McCoy being injured early on, and the Redskins having to put their least favorite teammate and quarterback, Robert Griffith III, to a controversial call in the end zone. The Giants offensive line seemed to be cohesive unit, allowing Eli to throw the ball and make plays. It certainly helps that incredibly talented rookie, Odell Beckham, was there to assist.

In the first quarter, Giants were having a bit of a rough time not being able to convert on third downs. The Redskins seemed to be able to stop the run which made Eli throw to Odell Beckham for a touchdown. This put the Giants ahead 6-3.The lead didn’t last long as RGIII came in after McCoy was injured, threw a touchdown pass to Chris Thompson. As the two minute cap approaced for halftime, RGIII ran in for 8 yard touchdown but was later reversed when it was reviewed. The referees called it a fumble in the end zone ( the referee claimed he did not have possession of the ball as dove over the pylon). This caused a red hot Santana Moss to exchange a few choice words with the refs and ended up ejected out of the game. The Redskins left the first half without a lead over the Giants.
The Giants rallied back and dominated second half. It started off with Giants recovering on side kick which lead to 32 year field goal kick from Josh Brown. Moments later, Eli and Odell started to work their magic and threw two more touchdowns. Odell Beckham ran for 143 yards and Eli threw for 259 yards, no interceptions. When the offensive line allows Eli the time to make the important plays; he will make the important plays , as evident with this three touchdowns passes to Beckham.

I could not talk about this win without mentioning the Giants defense who once again, seemed to have revived themselves, thankfully enough. The first half was not a spectacular showing for the defensive line. They allowed Washington’s running backs to have 4 receptions for 71 yards. They were having problems stopping the run and covering people in backfield. It looked scary to say the least. The second quarter was a completely different game as Jason Pierre Paul and the Giants defense ignited, and sacked RGIII seven times. Other notables on the defense were: Jonathan Hankins, Devon Kennard, Demontre Moore, and Cullen Jenkins each having sacks. The Giant’s defense always had talent, but struggled this season as well. It was just refreshing to see them put some fire on RGIII ,and the Redskins , offensive like we all knew they could. It was very nice to say that i was with down with JPP again.

This second win in a row for The Giants was exciting to watch, although we long lost for a playoff spot. We can always look to next season and seeing , hopefully, a healthy Victor Cruz along with Odell Beckham becoming a unstoppable weaons for Eli, and a pretty dangerous combination. Most importantly, a well put together offensive line. If there was one thing, in my opinion, that impeded The Giants success was the offensive line. Finally, the Defense coming back to it’s old glory days of being a defense that will always put pressure on the Quarterback , and make it nearly impossible for offense lines to stay on the field. I would love to keep seeing Jason Pierre Paul bring fear the quarterbacks .A defense that was able to stop a team in the red zone ( like they did in 2011 on their way the Superbowl). I wish to see this team become a Superbowl worthy once again

Giants vs Redskins Highlights was written by Guest blogger Angela Whiting Please leave feedback in the comment field below, I would love to know what you think.