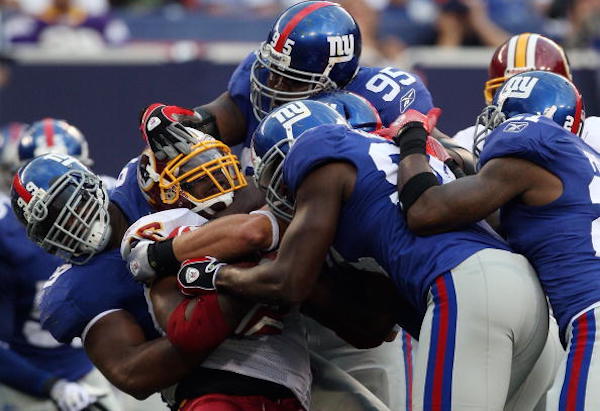 State Your Case Giants Vs Redskins

The Giants square off against Washington to shoot the fair one. In the Redskins corner is diehard Steve Shoup of Fanspeak.com (check out his Draft Simulator and play GM) He will tell you the Skins have a punchers chance.

Despite being a diehard Redskins fan, I really don’t believe the Redskins can or will beat the Giants this week, but here are my best three reasons as to why I might be wrong.

Alfred Morris is having a down year compared to his previous two seasons, but he can still be a workhorse running back if the Redskins can get the ground game going early. Too often the Redskins get down and are forced to abandon the run, which leaves Morris lacking for opportunities at the end of the game. That is what happened in the first meeting of these two teams, when Morris ran for 63 yards on just 12 carries.
If the Redskins can keep the game close Morris could feature prominently in the Redskins game plan against a Giants defense that is averaging 4.9 yards per carry. If the Redskins can get Morris 20+ carries, he may be able to carry them to victory.

The Redskins don’t have much going for them defensively, but the one thing they can count on is LOLB Ryan Kerrigan. Even without much consistent help from the DL and the absence fellow OLB Brian Orakpo, Kerrigan is having a career year and is terrorizing right tackles. Pugh has struggled some this year and it could be a favorable match-up for Kerrigan to exploit and make some big plays. Unless a repeat of Week 4 happens, this game figures to be close, so one big defensive play by Kerrigan could swing this game into the Redskins win column.

Both teams are out of it and while both head coaches will of course be looking for a win to point to, things are getting a little desperate for Jay Gruden. He made the controversial call to bench Robert Griffin III, and now is getting significant push back by the fans and some in the media. With the Redskins offense continuing to struggle without Griffin, Gruden is looking worse and worse (though it was probably the right call). While most think it is unlikely that Gruden would get the ax this offseason, if the Redskins continue to disappoint and roll over to their opponents, Gruden might find himself looking for work. This is by far the most winnable of the Redskins remaining games, so look for Gruden to get creative and risky in his play calling. The past couple weeks the Redskins have tried to be more daring in their calls, and that will likely continue to try to end this losing streak.

Blogging for our Giants is Tim Merritt, The Giants finally got a win last week and now they are about to face their NFC east rival, Washington Redskins. This is going to be the start of a winning streak and this is why:

This is the most obvious reason to give why the Giants should beat the Redskins. The Giants scored the most points they have all season in the game against the Redskins when they reached 45 points. The Giants played their best game against this team where they had 4 interceptions along with forcing 2 fumbles and it was in Washington. Washington has not gotten better since this game either. The Washington Redskins have won one game since these two teams played and they were just shut out in their most recent game against the Rams. Giants are coming off a win, which should boost their confidence along with knowing they are going to play a team they already beat.
Giants know they can win= Giants win.

Odell Beckham Jr. has been rated as one of the top Wrs in the NFL since he started playing in week 5.  His debut came the week after the Redskins game so they don’t even have the advantage of the experience of playing the Giants number 1 threat. If you have seen the Giants games, you would have noticed the offense centers around Odell by either getting him the ball or taking advantage of the attention that he receives. As the Giants gain experience with how to use the “Odell effect” the offense will just get better. Washington’s defense has given up 28 passing touchdowns, which ranks in the bottom 3 in the league. That means one of the top Wr in the league will be facing one of the worst passing defenses. I predict a big game by Odell.
Odell having a big receiving day = Giants win.

Redskins don’t know who is starting at QB this week:

Everyone knows that RG III was benched for his poor play and Colt McCoy was the starter but he was hurt this past week. At this time RG III and Kirk Cousins (who was benched after his poor play in the Giants game) have been splitting snaps with the starting offense while the coach tells reporters if Colt is healthy enough to play, he will play. Does this sound like a team with a plan? How is it this late in the season and there is no order to your depth chart? Whoever starts the game will probably have to do it without Desean Jackson who is injured. An offense that was just shut out does not know who is starting at QB this week and they don’t have their full compliment of weapons. The Giants defense has not been good by any means but after hearing what is going on with the Washington offense, they should feel like they can stop them and probably force turnovers.
Washington offensive confusion = Giants win.