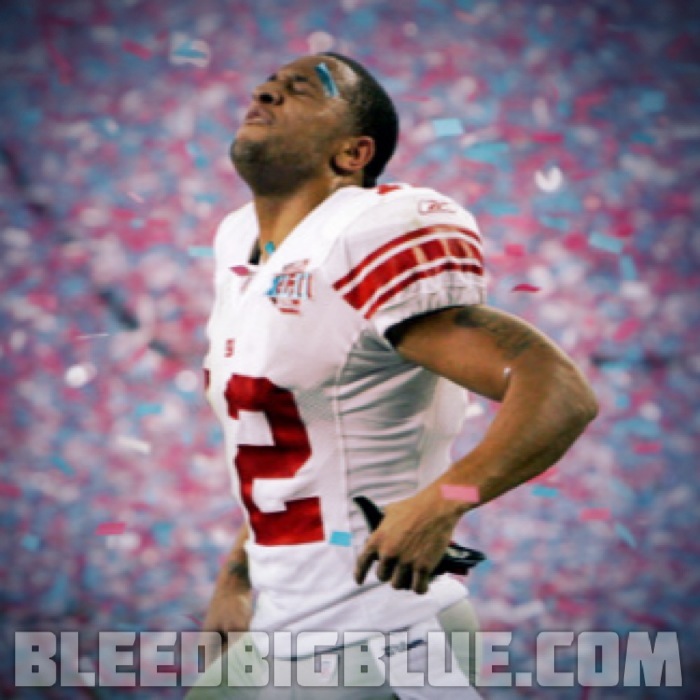 A year after having surgery to repair a tear in his ACL, Adrian Peterson fell 8 yards short of breaking the season high rushing record set by Eric Dickerson. In the off-season, AP said he was looking to rush for over 2,500 yard in this coming season. Well, in 2009, Steve Smith was second in the league to Wes Welker in receptions with 107. He had 57 in the previous season in a limited roll and in 2010 he was on pace to break 100 receptions once again. That was until he was hampered by an injury, which lead to season ending microfracture knee surgery and a mosaicplasty procedure. After 2010, Smith was released by the Gmen and bounced around the league for the next three seasons going to the dark side with the Eagles, then Rams and finally going into retirement with the Bucs. Therein lays the coin flip of knee surgery for professional athletes, but the genius of the Giants’ front office.
Steve Smith was the slot receiver for a Giants WR heavy squad in 2008, which boasted the talents of Plaxico Burress (until he was all up in da club), Amani Toomer, Sinorice Moss and a rookie Mario Manningham. When Toomer retired, Plaxico was locked up and the Giants were in disarray after a disappointing first round exit in the previous season there was a young, soft hands receiver to catch everything Eli threw his way. Smith was a godsend in 2009, leading a young core of receivers and giving the Big Blue faithful something to look forward to in the coming years. After his surgery in 2010, Giants fans were unsure of what would happen to Smith. A second year Hakeem Nicks had earned his stripes, Manningham had a couple years under his belt and for some reason Jerry Reese made the decision to pick up an undrafted free agent named Victor Cruz. Nobody, except for Mr. Reese, was sure how Smith would come back from his injury and if anyone could fill that hole. From my perspective, many fans were pissed about The Steve Smith Giants Saga, especially since he was shipped to the Eagles. But… In Reese We Trust. Cruz catches 82 balls his rookie season, Nicks adds 76 and Manningham finds himself on the way out because he’s the third wheel for the best WR duo in the NFL. Smith ends his career with only 25 catches after leaving the Giants.
There are a couple things to take away from this information. First, Steve Smith was a great guy who, without injury, could’ve been one of the best slot receivers in the NFL. I have nothing but good things to say about him and wish him the best. He was quoted as saying, “This was not an easy decision, but it was the best decision for me at this time.” So at a later time, if he feels better and is back to full strength and agility, maybe Giants fans will see Smith in Big Blue once again. Second, Jerry Reese is one of the best GM’s in the NFL. He has proven time and time again that he makes the right decisions no matter how much the fans may hate him at the time he makes them. Finally, Victor Cruz proves that there are diamonds in the rough everywhere you look and Mr. Reese knows where to find them. Obviously I want Cruz to come back and be dominant once again, but he has been concussion prone and is asking for more money than he should be offered. I have faith that the right decision will be made because as always, In Reese We Trust.