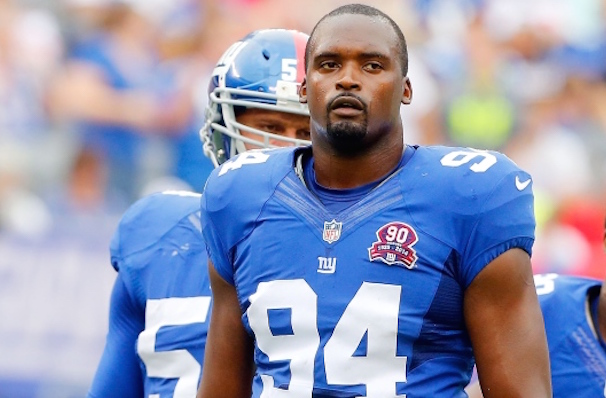 
On Tuesday the Giants cut ties with DE Mathias Kiwanuk. Kiwanuka, who turns 32 was one of three remaining giants who tasted Super Bowl glory is 2007 and 2011.

“Mathias has a warrior mentality,” said Giants general manager Jerry Reese. “He has been the ultimate team player for this franchise, and was a true pro from day one.”

In releasing Kiwanuka it is estimated the the Giants will clear about $4.8 million of space under the NFL salary cap. The Giants’ first-round pick in 2006 spent 9 years playing  in a total of 120 games with 82 starts. He is ninth on the Giants’ sack list with 38½.

“The thing that has always impressed me about Kiwi is how serious he is about the game,” said head coach Tom Coughlin. “He was always prepared and always in outstanding condition and played very hard. And he had some nasty in him.

“I always felt like you could count on certain things from him: eight-nine sacks, harass the quarterback, and you could move him around, inside, outside. He is dependable, reliable and there is no question about his professionalism.

Kiwanuka will now hit the free agent market, his whistle and hard play will surly be missed.

“I would have to back him off in practice and remind him that we’re not hitting the quarterback. He would always agree and then I’d have to remind him again the next play. “His character and professionalism and serious approach to the game will be missed.” said head coach Tom Coughlin.