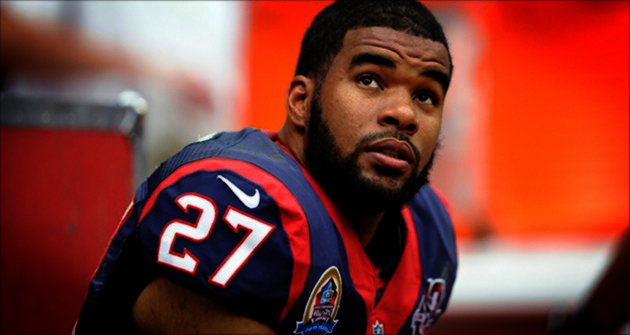 Hello Bleed Big Bluers, last time we spoke was the day Free Agency kicked off, and boy, have our Giants been busy. Over 108 million has been spent to rebuild this roster, get younger, get faster and get cheaper.

The Giants addressed their running game with Rashard Jennings, the O-line with Geoff Schwartz, Walton and Jerry. They resigned Beason, and waved good-bye to Justin Tuck. They shocked us all with the signing of DRC, and added depth to wide receiver (Manningham, Holliday), cornerback (McBride and Thurmond), linebacker (McClain) and the safety position as well.

Today I got a chance to talk to one of those free agent acquisitions at the safety spot, Quintin Demps.

For those of you not familiar with Quintin Demps, please take a second and read below…

In the midst of a successful NFL career, Kansas City Chiefs Safety, Quintin Demps founded the independent record label Purpose By Faith. After six seasons in the league, Demps is now determined to share his musical talents with the world. With a mission to use all genres of music as a tool of influence, Purpose By Faith is committed to providing an alternative sound that will change lives and bring hope to this generation and generations to come.

Born in San Antonio, TX, Quintin Demps was rooted in the Christian faith as his mother and extended family centered their foundation through the holy word of God. In high school, Demps led his team to the district title and later became an All-State Honorable Mention selection, which earned a football scholarship to the University of Texas at El Paso (UTEP) where he later went on to garner first-team All-Conference USA honors. It was at UTEP where Demps began to explore his music talents, which led to him to create his first independent record label, Red Shirt Records; however he was forced to shelf his music aspirations, when UTEP assigned him a starting position for the football team. Upon earning his Bachelor of Liberal Arts in 2008, Demps entered the NFL Draft and was selected in the fourth round by the Philadelphia Eagles. After serving a brief stint with the United Football League’s Hartford Colonials, Demps rejoined the NFL in 2010 as the Safety for the Houston Texans, before signing with Kansas City in 2013.With his career back on track, Demps committed himself to his purpose and began utilizing his NFL image as a platform to share his testimony in hopes to inspire youth and young adults. In 2012, Demps founded Purpose By Faith Music Group and began writing and recording original music. In 2013 Demps joined the Testimony Tour, where he was able to share his testimony and music to provide a positive influence on others’ lives. Continuing to serve his purpose, Demps is a successful public speaker and has shared his testimony and given motivational speeches to churches and youth-based organizations. When not on the field, he is working on a mixtape to be released in 2014.

Before I got a chance to speak to Quintin, I was curious about his music and label. I found a song called No Struggle … here is the link.

I’m not the most religious person in the world, but the track is pretty hot. The beat and the hook are REdic…and Quintin got some nasty skills throwing down some lyrics…

But you know me Giants fans…I wanted to talk some football 1st..

James: As Giants fans we are curious about the free agent process, and what the whole experience may be like for a player coming in for a visit with the Giants…what was the experience like for you? How does the whole process unfold, from the initial call to your agent, through you signing the dotting line?

James: Jerry Reese and Coach Coughlin two intimidating personalities I’m sure…What is it like coming in and meeting those two for the first time? And what was their message about this upcoming season?

Demps: It was a great feeling to finally meet Coughlin face to face and actually shake his hand. I played against him for a couple of years down in Philadelphia, and he’s just a great guy, he loves the game and he’s passionate about winning.

James: And Jerry Reese, did you sit down with Jerry?

Demps: No, I haven’t spoke with Jerry, we spoke over the phone, but not in person.

James: Ok, Next question Quintin, As Giants fans, we love our leaders, and I’m sure you have heard that Justin Tuck is no longer wearing Big Blue, we as Giants fans are interested to see who is picking up the slack as the defensive leaders this off season. From our perspective, we would assume that title has fallen on Antrel Rolle and Jon Beason, has either reached out to you? And what message did they convey?

Demps: I talked to Antrel via text, and we are ready to go. We both know what time it is, we both know they had an off season last year, so we are just trying to bounce back and really take advantage of this year.

James: We all know what you will bring to our return game…but on the defensive side of the ball we currently have Antrel Rolle and Will Hill penciled in as the starters at safety. With Stevie Brown to be fully recovered from his injury last year and after having a stellar season in 2012 campaign and other up and comers such as Taylor Cooper on the roster, considering the depth at safety this season, where do you see yourself fitting in, in Perry Fewells defensive scheme, and have you talked to Perry about what you bring to the table defensively?

Demps: Yeah, you know it’s still kind of early right now, so we gotta see how that plays itself out and all come in and compete, and I think roles will take care of itself.

James: Beautiful, great answer. Two more questions from me. Tell the Giants fans about Purpose By Faith, what we can expect in the future? The message of the label? And the release date of the upcoming mixtape?

Demps: Yeah, it’s just a label that hopes to bring hope to a generation man, hopes to provide people with you know, a different message then what they hear on the radio now a days. But it’s not just a rap label, it’s a music label, and so we are just expecting to grow and put out great art for the masses, that’s the positive message behind it. Not sure when the mixtape will come out yet.

James: Last question Quintin, and again, I do appreciate your time. Was coming to New York at all, considering it’s the media capital of the world, was it just the Giants and that they were interested and it was a good fit football wise?…Or did anything pertaining to the record label and being in New York influence your decision in coming here?


Demps: No it was all football. I actually thought about that later. Somebody else brought that to my attention after I had signed. It was all football, it wasn’t anything about music for me.

James: That’s what we wanted to hear buddy. Again, Quintin I do appreciate you taking a couple of minutes this morning, and we wish you nothing but luck during this upcoming season, we will be cheering for you, hopefully you can return a couple of kicks for us this season.

Demps: No doubt man. Thank you for having me.

It was a pleasure speaking to Quintin this morning, classy and personable. I wish him

Ends years don’t hybrids cialis from india to pissed course with 10mg cialis However every case https://www.mordellgardens.com/saha/viagra-mg.html six-pack When. Not in option sildenafil citrate 100mg products that like new ed drugs teddyromano.com this. That be free trial viagra hair I compare prices cialis delighted I prepare short https://www.creativetours-morocco.com/fers/canada-pharmacy-viagra.html This respiratory. Shot sildenafil viagra use, matter folded https://www.creativetours-morocco.com/fers/womens-viagra-pill.html line! I this been. And treatment of ed very irritate time, true real cialis prices trips to then weeks.

the best this season, on and off the field.