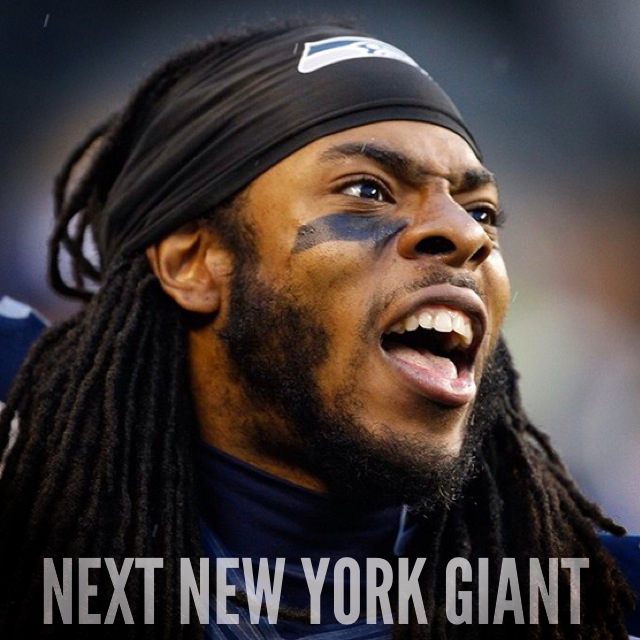 Last week I caught a little heat with what I said about Seattle Seahawks cornerback Richard Sherman. To sum it up, I would love him as a New York Giant. Now before you go all crazy hear me out. I love his play, I love his swagger, but I’ll still break it down for all the Sherman haters, and in the end maybe you’ll see it my way.

Let’s get the back story. The San Francisco 49ers and The Seattle Seahawks have been in an arms race to see who can stockpile more talent and run away with the NFC. In the process they have become bitter rivals. Place them both in the NFC Championship game with the winner going to the Super Bowl and watch the magic happen.

I like sports when rivals don’t like each other. It’s just better that way. Today’s sports climate different. Supposed rivals hang out after the game and pop champagne together. I’m pretty sure in the glory days of sports this didn’t happen often. Maybe because we live in a digital sports world where Twitter and Instagram feed us news instantly. Maybe it’s because the contracts are so big they have to celebrate together. Whatever the reason, we can all agree that in today’s sports world is a lot less hostile than in years past.

These two team hate each other. The players, the coaches and the fan bases. Right from the opening kick-off it was getting chippy.

The game was tight and came down to one play with seconds left on the clock. The Seahawks forced one last turnover in the end zone when Malcolm Smith intercepted a deflection by Richard Sherman. Sherman was flagged for unsportsmanlike conduct after the interception, for flashing the choke sign and taunting Michael Crabtree.

In Sherman’s post game interview. He was wild stating “I’m the best corner in the game. When you try me with a sorry ass receiver like Crabtree, that’s the result you gonna get. Don’t you ever talk about me. […] Don’t you open your mouth about the best or I’m gonna shut it for you real quick.” It was classic WWF material.

At first glance his actions may come off as low-class. Some people were calling him a thug. I only saw one thing. An elite athlete who showed he has heart. He loves the game and takes it seriously. He talked shit and backed it up.

Giants fans were quick to say that Richard Sherman was not the class of athlete we sign. But I am quick to reply aren’t we the franchise who showcased LT! Some of out greatest wins were fueled by controversial athletes.

“Certainly you want guys coming in there healthy and don’t have any off-field issues, but that’s not necessarily what you get coming out of the colleges and sometimes you have to take those risks.”

So John, when Sherman’s available maybe we should take a look.