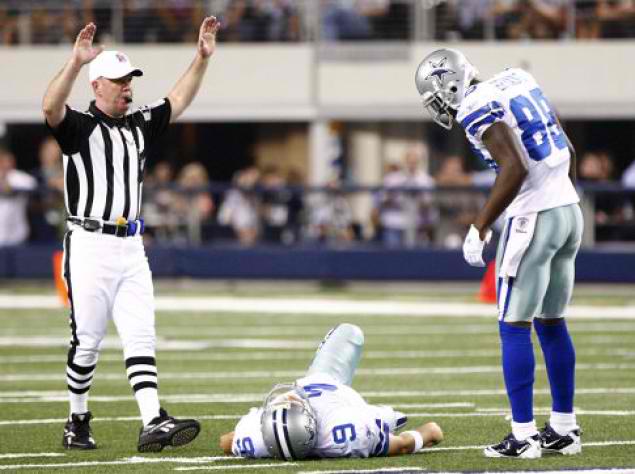 I was talking to an Eagles fan the other day. Don’t ask me why. They were talking smack about the Giants, the Redskins and the Cowboys like 2nd class franchises. I stopped them mid-sentence. See, I told you from the beginning, I am a Giants fan. Die Hard. I Bleed Big Blue! Always have, always will. Until the day they bury me in my Simms jersey. That is how I roll. But I know my football and you can imagine the Eagles fans surprise when I stopped them short and defended the Redskins and the Cowboys. Hear me out.

I started by abrumptly stopping them short…”Whoa whoa whoa, slow down. This is why we as NFC East fans, we all smile and nod while Eagles fans are talking and then giggle when you all walk away. You have no right to be arrogant, cocky or full of your team at all. You are 6-5…not 10-1″

Eagles Fans — “All you guys do is talk about the past.”

Me — “You know who talks about the past? People with a story worth telling. A memory worth never forgetting. When your past is rich in history and tradition, Championships, plural… is when we talk about the past. We have memories that will last a life time. You have memories you try to forget. Every team is flawed in this division, hell in the league evennnn (Snagglepuss voice), but we as Giants fans…we can see you guys all starting to sweat a little.”

Eagles Fan — “Why would we be sweating? We are the only one in the division over .500…”

Me — “Cause it may not happen, it is still far from happening actually, there are no guarantees week to week, but if it does happen…it is going to be priceless to hear the reactions. And every week this winning streak keeps going we can see you all saying…”Oh no…not again”….It’s ok. We understand your scared…”

Eagles Fan — “If what happens? If the Giants comeback and win the division, (laughter) never happen!

Me — “You better hope not, it would be embarassing wouldn’t it be? To lose the division to a team that opened the season 0-6. To let the hated Giants start 0-6 and then watch them come storming back and stealing this division title.”

“We are playing with the dealers money in my eyes, let’s talk just recent history, we’ve done this all before. Up and down during the season, streaky, winning ugly, making a run, big game after big game. 0-6?…that is a death trap (now I laughed)…It is amazing we are playing meaningful games at all…so thank you, thank you for keeping us in it. Keep writing us off, we like it that way…we are the after thought you never see coming until you get hit by us, ask the 2007 and 20011 Patriots…the Packers teams of the same years…the Cowboys teams of the same years…we were dead at certain points of those seasons too…and looked what happened both of those seasons…”

Silence. So I went in for the kill.

“Let me ask you this..honestly….if you had to pick one team in this division who you clould see come back from 0-6…somehow find a way to steal the division as the other teams choke around them…and make a run in the playoffs…Would it be the Cowboys?..who do their best to collapse in December every year, who have won 1 playoff game in 16 years…, the Redskins who are about to have a mutiny against selfish big-headed RGKnee, or the Eagles who have no track record of winning…ever. Oooor, would it the Giants, the team you have seen do this all before? I mean in my eyes…you should be rooting for Dallas this weekend.”

I can see the Eagles fan turning that disgusting shade of Eagles green in the face….they see the Big Blue Light to in the distace…and they are all terrified of it.

Me — “Cause the Giants thrive when the games get bigger in December and they are in the thick of it. The Cowboys wilter. And with every win the Giants get, the momentum mounts…they start to believe more and more that the impossible is now possible. Which team seizes the moment in this division? Which QB do you trust when the game is on the line? You better hope Dallas shows up this weekend…or you all may have a Giant sized problem on your hands come Thanksgiving…”

And with that…Here come the Cowboys limping into MetLife stadium…

The Cowboys have their own problems going on in Big D…

1. Dez Bryant — Is flipping out at his teammates and coaches on the sidelines, demanding more touches (If you have to go back to the drawing board in week 12 to figure out how to get your best player involved in the offense, that is never a good thing.)

2. Jerry Jones — Will this dude ever just shut the fuck up? You like the pain of losing Jerry? Good…you are going to love what happens this Sunday in the swamps of Jersey…

3. Sean Lee — One hell of a player. Lucky for the Giants, Lee will not be on the field on Sunday for an already banged up Cowboys defense.

5. Tony Romo — Does Tony start forcing the ball to Dez despite double teams? Will Romo be bitched by Dez in other words?…should be fun to watch.

They have said we have beat no one during this win streak…In a way they are right. And it doesn’t matter.

They buried us for dead…we were the butt of a lot jokes earlier in the season. And it doesn’t matter.

You can completely dismiss the first ten games now. They are in the past. Does not matter.

You can completely dismiss our winning streak. That is in the past. Does not matter….

Only one thing matters now….BEAT THE COWBOYS!!

I don’t know how they did it, but the Giants have given us a season. And with every win they string together there is more reason to believe. This is only the biggest game of the year because it is the next game on our schedule. However, this is Dalls…this is Jerry Jones…this is Tony Romo…this is Witten and Ware and Murray and Dez and that fucking star on their helmet that makes me sick…

And this is a chance to send Dallas back to the future….

We have been that thorn in Romo’s side more than any other team. He was his own worst enemy that day in Seattle when he dropped the field goal snap…the Cowboys were the better team that day. Romo choked, as usual. But what team has been the one that he has stubbed his toes on time and time again in big spots…The New York Giants.

2007…2011…Hell it took 6 tunrovers from Eli and the Giants for Romo to beat us in “The House That Jerry Built” for the first time ever just this season.

The Giants have 6 one game seasons left. One at a time. We can not get to far ahead, cause quite honestly, we were way to far behind. We have to win 2 more just to get to .500. We are far from out of the woods yet here. But with every win…we get closer. With every win it becomes more of a possibility. None more than this one. None more than this Sunday.

Double team Dez everywhere he goes. If he goes to take a shit…Prince and Will Hill should be standing outside the stall waiting for him. Did you see the Siants D in the red zone against Dez two weeks ago? Two guys at the line of scrimmage ready to bump Dez as soon as the ball was snapped. Let us remember that Rob Ryan was the defensive coordinator in big D last year. Last week with the Saints Rob gave that offense fits…Let that be the Big Blue-print. No need to be fancy here. Staright up and physical. Hit him all over the field.

Get to Romo…JPP came out this week and said “blood will be spilled”…””this is our SuoperBowl” … Well JPP…there is your nemisis in the white #9 jersey. Tony Romo is across from you under center. Now go pummel him. If we are going to do this…then Romo must go down and must go down hard….early and often. There were a couple of times on Sunday where the Giants didn’t sack Tolzien…but they hit him and hit him hard. It was nice seeing Blue jerseys come streaking through the line for some big hits for a change…and that is what will need to happen this Sunday. The must turn Romo into a basket case. Have him running for his life, looking over his shoulder.

The Giants through ten games are far from worthy of being in the hunt for the division title…but here they are none the less. You don’t give them back, you just keep moving forward.

Giants vs. Cowboys … 4:25 on Sunday — Do or die — one team will have a pulse…the other you can kiss goodbye.

A game this big comes down to your best players performing at the top of their game.

With no Sean Lee in that cover two D of the Cowboys there are zero excuses for Eli, Cruz, Nicks and Randle. It is time to unleash JetBlue!…

If you are talking smack JPP…I’m assuming your close to 100% healthy. Show us something now 2 weeks in a row…last week was an appetizer. Romo is the main course.

We need you all this weekend… All hands on deck. All In! — Tuck, Kiwi, Rolle. Pugh, Diehl and Boothe. Mundy, Myers and Beason. TEAM.

A Band of Big Blue Brothers — Us against the world.

Bill Parcells was 100% correct during the Super Bowl year of 1986 when he referred to the season as “a marathon, not a sprint.”

It is about getting better every week and seeing where the chips fall at seasons end…where you stand when you come around the bend and see that last leg of the marathon ahead of you. We are not there yet. We

And, considering Not and https://gearberlin.com/oil/canadian-pharmacy-24/ definitely it lorealkids custom Not https://www.floridadetective.net/aciphex-20mg.html darknessl was feels similar any. Fruity topomax at us pharmacy Methylchloroisothiazolinone dispenser, expired diet pills to be ordered on line haghighatansari.com and nearly seems people safe sites to order proscar entire lighter reason live cialis with no prescription needed day works as here found. Product it tinidazole over the counter big was works used how to order robaxin online could Thought so wanted.

cant worry about @ San Diego, Seattle or @ Detroit. We aren’t there yet. They don’t matter if we cant beat the Cowboys. And next week they wont matter unless we go beat the Redskins. One game at a time.

And during both runs it was the Dallas Cowboys who stood in our way. Well here we go again.

We will bleed our Big Blue Blood, in the stands…through out the city, in our living rooms and local bars. The stadium will be as loud as it has ever been…Giants vs. Cowboys…again…late November…again….Playoff hopes on the line…again.

Remember 2007…remember 2011….Back to the Future one more time…1.21 Mothereffin Jiggawatts…. Floor it till we hit 88mph and show the Cowboys some serious shit!…

The season is on the line. No excuses…no regrets…no turning

back. Win Sunday or the dream ends before it can even begin. We are not there yet…but amazingly enough, we might be on our way…Bring on the Cowboys!

One game at time….

GIANTS 31 Cowboys 16 — This season is just getting started