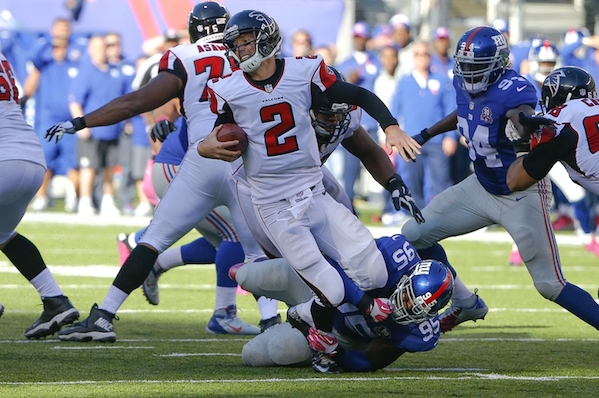 We one gain asked Matt from TheFalcoholic.com to give us three reasons why he thinks the Falcons will grab a victory at metlife stadium this weekend.

For Atlanta:
Another year, another battle against the New York Giants. Short of a rare game or two, the Giants have had Atlanta’s number since the Mike Vick era, and I usually chalk up the game as a loss in preseason. We are only one week into the season, so it is a little difficult to measure what each team brings to the table this year. The Giants are of course coming off of last week’s deflating loss, and the Falcons finished off with an emotional victory over the Eagles.

Why will the Falcons win this week? I am worried about the Giants bouncing back after last week, and the Falcons losing focus on a short week on the road. The Falcons should win if they do everything I thought they needed to do last year. The only difference in 2015 is that the Falcons have so far succeeded with these three key aspects.1. The offensive line keeps pressure away from Matt Ryan.
Atlanta has struggled to keep pressure off of Matt Ryan, and things did not work out well. They blew up the old offensive line, and are only starting one lineman from their game one lineup in 2014. The current group includes a bunch of sendoffs from other teams, undrafted free agents, and players switching positions. The results? One sack allowed against an impressive Eagles front seven. If they can keep this up, and allow Matt Ryan enough time to pass, the Falcons should have no problem putting up 30+ points.
2. The offense gets the football to explosive play makers outside of Julio Jones.
I think it is just assumed that Julio Jones will have a big game. He has them every week. Assuming he stays healthy, he should be good for at least 100 yards. Kyle Shanahan has done some impressive things this year by moving Jones around, and he has another chance at a big week. The problem last year was the team rarely got the ball to anyone else. Last year, I said if Antone Smith and Devin Hester can get the ball, the Falcons should have a chance. They ended up with 7 touches (including Antone’s 74 yard touchdown catch, oh I miss that guy), while players like Steven Jackson received 18 touches.
New year, new players. Roddy White looked healthy on Monday Night, but I am most impressed with electric rookie Tevin Coleman. Despite his 4.0 YPC average, Coleman has the potential to make big games in the run game. Backup running back Devonta Freeman had some nice catches, and Shanahan has managed to scheme a more open offense than prior years.
3. The defense can play average.
It has arguably been at least four or five years since the Falcons defense could be considered average. Mike Smith, along with Mike Nolan’s incompetence, developed the least-effective defense imaginable. I think it had been years since I had last seen a third and long with more than three pass rushers. Giants fans should be familiar with the idea that if your quarterback gets some help, you should be able to stay in just about any game. The same is true for Matt Ryan, who has not had a defense, an offensive line, or a run game in at least two seasons.If Atlanta’s defense can be average, the Falcons have a great shot at winning. The most impressive thing is they managed to do exactly that against the Eagles. The defense is still clearly short on quality depth, but they managed to prevent any big plays against Chip Kelly’s offense. They were not great, but the Falcons needed them to do just enough to leave with a win.

For New York:
What happened last week was a two minute meltdown don’t expect that to happen every game. What one should really take away from the Giants lost to Dallas is that the Giants look far improved in many areas.

The Giants to come out ultra focused and ready to battle against Atlanta. The quickest way to put the Dallas game out of the headlines is with a win.
1. The Secondary holds up.
The Falcons wideouts will get their numbers  especially Julio Jones but expect the Giants secondary to be competitive and not give up many big plays.
Jones has been slowed down by a hamstring injury but numbers against the Eagles last week would tell you a different story. He is expected to be fully ready for Sunday.  Giants safety Brandon Meriweather plans to prove doubters wrong and take up this challenge.

2. Falcons overplay on defense
The Falcons defense looks much improved under Head Coach Dan Quinn. The turnaround could be attributed to playing fast, quick, and playing aggressive. The Giants might employ Shane Vereen more often this game especially on third down situations. The Eagles running backs exploited holes in the Falcons secondary to the tune of 14 receptions for 111 yards and 1 TD score. Vereen with the ball in his hands scan only provide positive things and hopefully swing the game into the Giants favor.
3. Get to the quarterback
I’m still debating was The Cowboys o-line that good or our D line that bad. Robert Ayers and Damontre Moore should be able to get to Matt Ryan with an easier assignment this week. Some home cooking with a rowdy crowd should be able to disrupt some of the Falcons plans. It’s only week two in there already is a sense of urgency.
Starting middle linebacker Jon Beason looks like he will be ready for Atlanta his veteran leadership is needed in the middle and surely missed.