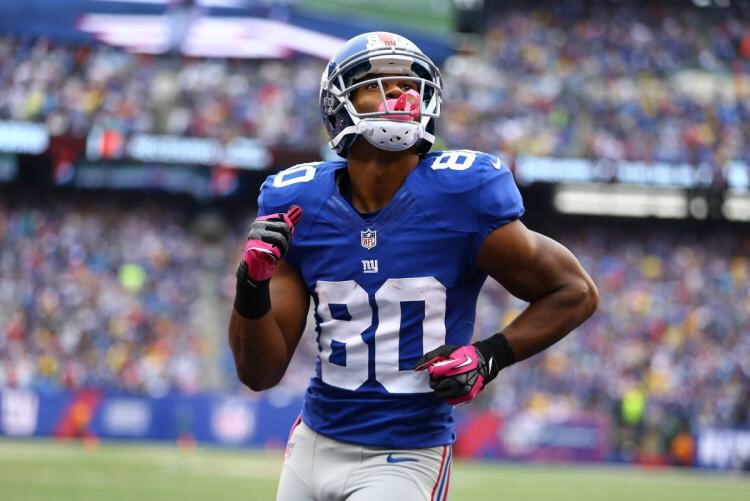 Victor Cruz exploded onto the scene with New York Giants fans in 2010; wearing a jersey that matched the number of touchdowns he scored against the New York Jets that day: 3. It was the beginning of a journey that would watch Victor change numbers, (#80 just looked right) salsa his way into our hearts, and catapult us to a Super Bowl.

He vanished on Monday, with much less excitement. The Giants cut Victor Cruz, without so much as a last dance.
We’ll have time to dissect what this means for the roster in the coming weeks. How will it affect our strategies in the draft and free agency? Time will tell. Today, let’s remember the good times with VC.

Victor was destined for stardom with the Giants from the jump. A hometown boy from Paterson, NJ. The quintessential underdog, who was easy to root for, and complemented Eli Manning so effortlessly, yet so perfectly. We watched Victor discover himself, we watched him grow up. Each touchdown, accompanied by a celebratory salsa, cemented his place in our hearts.

The salsa was Cruz’s way of showing us he could handle life as a star athlete in the largest media market in the nation. The salsa was flavorful, yet understated. A connection between the fans and their hero that was somehow both personal, and larger than life.

The first time we saw the salsa it was in Philadelphia. An introduction to Victor’s calling card: game-breaking speed. The ability to create separation, expand it, and capitalize on it. Living in Philadelphia I was sold. I loved Big Blue’s newest star, and opposing teams grew to hate him, because try as they might, the salsa could not be stopped.
An amazing 2011 season that saw VC compile 1,536 yards on 82 receptions, still only had the Gmen with a 7-7 record halfway through week 16 against the Jets. A 10-yard out from the slot. A jump-cut. 99-yards. Salsa. The Giants stood at 8-7 headed into a showdown with the Cowboys for the NFC East Title.

After 16 weeks of heroics, there’s no way a division rival would allow Cruz to beat them, right? Think again. 6 catches. 178 yards. A 74-yard tone-setting touchdown on 3rd and 1 with 5 minutes to go in the first quarter. The Giants headed toward another Super Bowl run, and they had Cruz to thank.

Fittingly, Cruz would impact that game as well, scoring the Giants first touchdown of Super Bowl XLVI on a slant that saw Cruz slither into the tiniest of spaces, and find room to salsa.

For 3 seasons, it seemed as if whenever the Giants needed a clutch play, #80 found a way to make it. No moment too big to conquer, no mountain too large to climb. Remember the 77-yard seem route on 3rd and 2 against the Redskins in week 7 of 2012? Cruz. Salsa. The extraordinary had become routine yet glorious!

The 2014 season had great promise. We had drafted a young speedster in Odell Beckham Jr. Being able to pair him with Cruz would be dynamite. Beckham would spend the first 5 weeks of the season recovering from a hamstring. Week 6. Philadelphia. The birthplace of the salsa. Cruz would make what looked to be a routine touchdown grab in the far corner of the endzone. On the way down, he’d grab his knee. We all knew. The nausea was instantaneous. As they carted him off the field that night, he sobbed, demonstrating the heart we had all grown to love most about him. Victor was an elite player, with a monstrous heart. He was a player who never took anything for granted, because on the way up to the top of the sport, nothing had been promised to him.

In 2016, after two years battling injury, Victor returned to us. His game-changing speed had been sapped from his body. Fans everywhere could do nothing but wonder what could have been, had OBJ and VC been allowed to join forces while Cruz was still in his prime. His slot position now filled by a promising rookie named Shepard, Victor moved to the outside. Cruz’s game took on a new look. Without his signature speed, VC’s game centered upon a rapport with Eli Manning. The trust the two had in each other allowed Eli to put the ball in the exact spot where only Cruz could catch it. The salsa returned to New York against Dallas in week 1, as #80 scored the go-ahead touchdown. Week 2 followed with the clinching reception against the Saints on a bomb down the sideline, that Cruz hauled in at its highest point.

As the season progressed, Victor’s inability to create separation became apparent. There were games without targets, and routes jumped by CBs that directly lead to interceptions. Party boats in Miami, regular references to himself as the “OG” of the Giants receiving corps, and a growing sense that a $9.5 million cap number for 2017 would bring an end to his tenure in The Big Apple. His fans understood what was happening. Father Time has a sterling record.

We still appreciate Victor, and we will always love him. The memories of his dominant run will never be far away. He will forever be a Giant, even if 2017 sees him in a different colored jersey. He captured the imagination of a fanbase, making a connection with each of us. I choose to remember that today. I choose to appreciate the greatness. Wherever he plays out his career, a piece of me will always root for him, as I did with Bavaro, Collins, Shockey, and Tuck. You’ll always have a place in the Big Blue Nation. Thank you for connecting with us, exciting us, and giving us reason to cheer. Thank you, Victor. Come home soon.