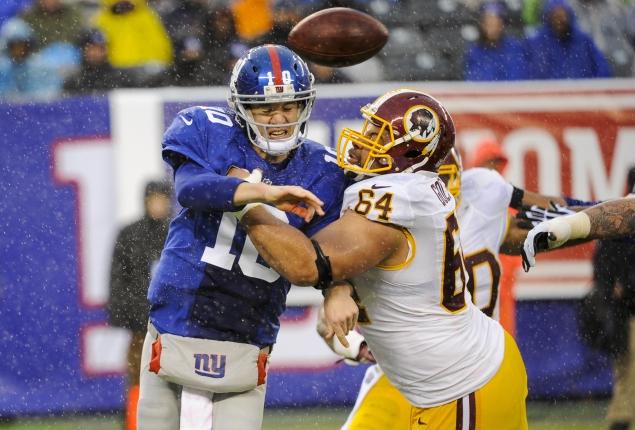 If the Giants offense proved anything today against the Redskins they are “consistently inconsistent”. It was truly a microcosm of the entire season. Throughout much of the game we saw the offense that started season (0-6), an offense that “put the ball on the ground” or “gave up the pic” equal to Obama’s approval rating.

Wide receivers and tight ends that failed to make “the catch” at the most inopportune times. Horrifically it seemed all those “drops” ended up going in the other direction (Meyers in the end zone-never mind it was deflected-the Redskins defense seemed to hang onto the ball).A running game that was stuck in neutral for mind boggling long stretches during the season (the entire 1st quarter of today’s game). Passes from Eli that sailed “just a bit outside” (the 3rd and 2 to Nicks), in “Christmas seasons past” Eli finds a way to get job done. Yet, we saw glimpses of the offense that went 6-3 in the last nine games. Do they make plays? At times…yes, Eli to Nicks for 35 yards, Jernigan’s 49 yard end around and 24 yard catch for touchdowns in the 2nd quarter. But, they do not make enough plays to beat the big boys (Eagles and Cowboys yuck). And that is not saying much this year.

How can an one offense have all these problems? Simply it is the offensive line. An offensive line that was easier to crack than Target’s website. This O-line needs to be gutted. Diehl the oldest and longest tenured of the group is a free agent and probably isn’t back. He simply can’t stack up anymore. Beatty obviously has to heal and has been serviceable at best. Cordle is young and shown minor improvement but not enough to justify starter material. Pugh is the lone lineman whom should return considering his age and draft status. Finally, Boothe has been beaten more times than the Confederates at a Gettysburg revival. Kevin Gilbride- this doesn’t excuse you… as previously stated in this blog…your time and place in the Giants organization has come to an end.

The Blitz- The Giants defense was outstanding throughout the game (given it was just the Redskins). Justin Tuck proved he deserves to return as a “Captain”. The guy continually wreaks havoc on the opposing offense- forces fumbles, tackles behind the line of scrimmage, sacks, and knockdowns (2 sacks and 2 forced fumbles today). Beason was a “beast” with 9 tackles 8 of them solo. Antrelle Rolle played like he had a chip on his shoulder after being snubbed for the pro-bowl with 5 tackles and 1 pass defense.

The Good, the Bad and the Ugly
The Good- Jerrel Jernigan-Two impressive touchdowns-24 yard catch and 49 yard run (6catches -90 yards)
The Bad- Redskin’s losing 8 in a row to finish the season and Shanahan in D.C.
The Ugly- Will Beatty’s injury (broken leg)-enough said.
Final Thoughts
Need’s – Basketball wide receiver- The G-Men do not have the “jump ball” wide receiver against defensive backs.
“You are what your record says you are”- Bill Parcells. The 2013,Giants (7-9)- the definition of “consistently inconsistent”.

What To Do With Hakeem Nicks?