Eight of the greatest NY Giants teams of all time were entered into the Bleed Big Blue simulator.

We have arguably the greatest Giants team of all time, the 1986 team led by Bill Parcells, Lawrence Taylor and Phil Simms.

Versus the team that halted perfection, the 2007 squad, led by Tom Coughlin, Michael Strahan and Eli Manning.

Parcells vs. Coughlin. Simms vs. Manning. Taylor vs. Diehl. Carson vs. Jacobs. NASCAR Package vs. The Suburbanites…and so on and so on. 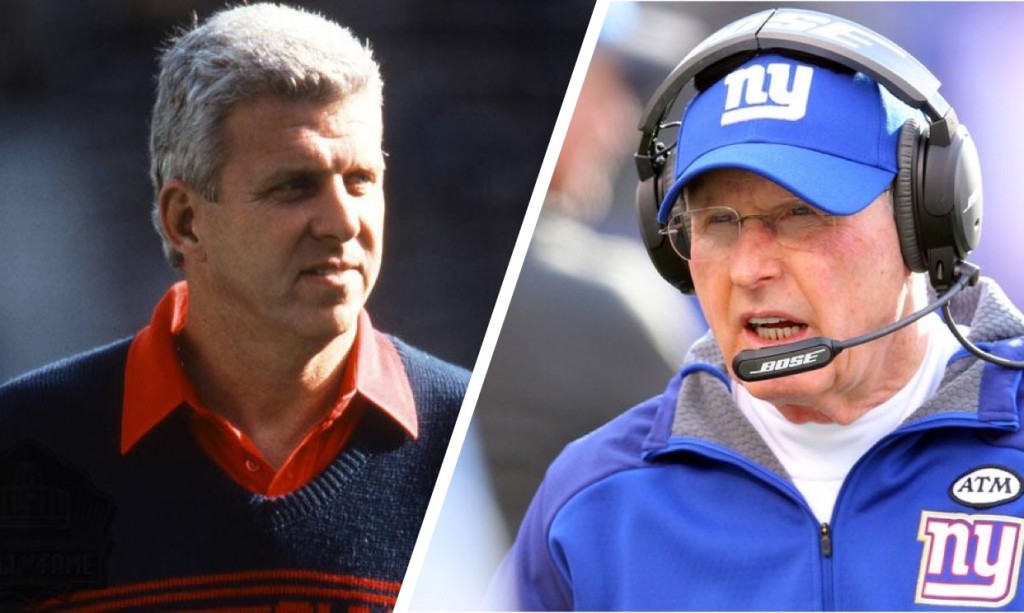 We entered the names, the stats and all the rest into the simulator….the results are as followed.

Incase you forgot how we got to this point, read up Elite 8 & Final Four.

The 86ers won the toss and elected to kick.

Eli Manning and the 07 offense got a taste of what they were up against early on. Jacobs was stopped for a 2 yard loss on 1st down. On 2nd down Eli was pressured and forced to throw the ball away. On 3rd down, LT flew past David Diehl and sacked Eli for a 10 yard loss.

Simms and crew on the other hand started off hot. The Suburbanites opened holes early on running against the right of the Giants 07 defensive line. They targeted Osi Umenyiora in the run game and Joe Morris took advantage. Morris rushed for consecutive runs of 12, 8, 16 and the 86ers just like that were set up in the opposing team’s territory.

It was then that the Mark Bavaro show started. Simms on gorgeous play action fake hit Bavaro in stride between LB Antonio Pierce and Safety Gibril Wilson on a 31 yard TD strike.

The effortless drive was like a wakeup call for 2007 team. Eli made the adjustment against the superior pass rush of Taylor, Banks, Martin and Marshall. Eli got rid of the ball quickly for consecutive completions to Shockey, Burress and Steve Smith to quickly put the 07’s across mid-field. Jacobs and Bradshaw pounded their way on four consecutive rushes for back to back 1st downs. With 4 minutes left in the 1st quarter, Eli found the end zone. On a 2nd and 7 from the 86ers 28 yard line, Eli looked right and froze the defense with a pump to Burress, then calmly turned and floated the ball towards the end zone where a Well Dressed Amani Toomer beat CB Perry Williams on a stop and go route…tie game.

Bavaro, Bavaro and more Bavaro. The 07’s linebackers and safeties were not ready for this match-up. The man we called Rambo dominated the 2nd quarter catching 7 passes for 69 yards and a TD in that quarter alone.

His 2nd Td was vintage Bavaro. Simms led a drive in which he converted 5 different 3rd downs to five different WR’s. To Bobby Johnson on 3rd and 8. To Stacey Robinson on 3rd and 4. To Phil McConkey on 3rd and 5, and finally to Zeke Mowatt on 3rd and 1. A couple of plays later on a 3rd and 6 from the 21 yard line, Simms hit Bavaro at the 10, he then bounced off Wilson, carried Kawicka Mitchell to the 3 and ran over James Butler on the way to his 2nd TD of the day.

Eli on the next drive hit Ahmad Bradshaw on screen pass. It looked like a minimal gain until a great block on the outside by Chris Snee busted Bradshaw loose. 44 yards later Eli and 07’s were set up to tie the game. Consecutive 3rd down strikes to Toomer and then Burress set up a 1st goal at the 86ers 7 yard line. From there the drive stalled as Gary Reasons made consecutive stops on Brandon Jacobs on 1st and 2nd down. On a 3rd and goal from the 6 yard line, Eli threw incomplete for a covered Plaxico Burress.

With 6 minutes left in the 1st half, Simms led the 86ers on another drive as he picked on CB Aaron Ross several times. The 86ers drive was stopped by Michael Strahan, who fought through a double team to sack Simms on a key 3rd down play. On 4th down Raul Allegre trotted on the field to extend the lead to 17-10.

Manning then raced the 07’s up to field frantically in the two minute drill. Shockey for 14. Toomer for 20. Burress for 17. And right before the half, Tynes came back on the field and drilled a 40 yarder to narrow the lead to 4.

Simms and the 86ers received the ball to start the 2nd half and the momentum quickly began to swing. Morris was stuffed for no gain on 1st down by Mathias Kiwanuka. Then on 2nd down, Morris swept to the right and was cut off by Pierce and Strahan, who knocked the ball loose. The fumble was recovered by Fred Robbins at the 17 yard line of the 86ers. Three plays later Bradshaw sprinted in from 9 yards out and the 07’s took their first lead, 20-17.

The 3rd quarter dominance by the 07’s continued for the rest of the 3rd quarter. The 86 team never once crossed their own 40 yard line in the 3rd, and were forced to rely on the right leg of Sean Landeta to keep the 07’s pinned back deep in their own territory.

To the 4th quarter we go.

Before the start of the 4th quarter the cameras in the Big Blue Simulator caught a glimpse of the 86ers sideline. Before they took the field to start the 4th, Simms could be seen surrounded by his offensive teammates. They were huddled around him, he had Brad Nelson and Bart Oates by their facemasks, he stared in the eyes of Bavaro, Morris, Manuel and Karl Nelson, and although we couldn’t hear his words, his eyes conveyed the message he was telling his team, now or never.

The fire and brimstone speech must have worked.

Simms was not touched for the entire 4th quarter. Given a clean pocket, he targeted Bavaro again for completion after completion, and marched the 86ers across mid-field. Morris scampered for 20, followed by a 12 yard completion to McConkey. And then on 1st and goal with everyone watching Bavaro, Simms gunned a pass to Zeke Mowatt for a TD.

On the next drive the 86ers began to pressure Eli Manning. LT and the rest of the Big Blue Wrecking Crew swarmed around Eli, but Manning, despite the pressure and the hits, stood tough and led the 07’s on an impressive, balanced drive, that resulted in another Tynes field goal.

The 86ers took the ball at their own 20 with Big Blue history on the line, and the greatest Giants team of them all stepped up to the plate. It took Simms just over 2 minutes to lead the 86ers down the field and with 1:21 left Simms once again found Mark Bavaro. This, my friends was epic.

Simms dinked and dunked his way to midfield, and with just over 1:30 on the clock, he found Bavaro at the 25 yard line on a post play, the rest was history. Bavaro caught the ball in stride, broke two tackles and rumbled 50 yards for the go ahead score.

We all thought we knew how this one would end. Eli’s ball, 3 timeouts, ample time, but we didn’t count on one thing, LT.

The greatest Giants player of all time answered the bell on 1st down. LT beat David Diehl clean, Eli never saw him coming. LT blasted Eli on his blind side for the sack and the ball bounced into the hands of Carl Banks who raced into the end zone untouched to put the game away….38-26, he is very passionate, evn thoug his favorite game is casino dames. 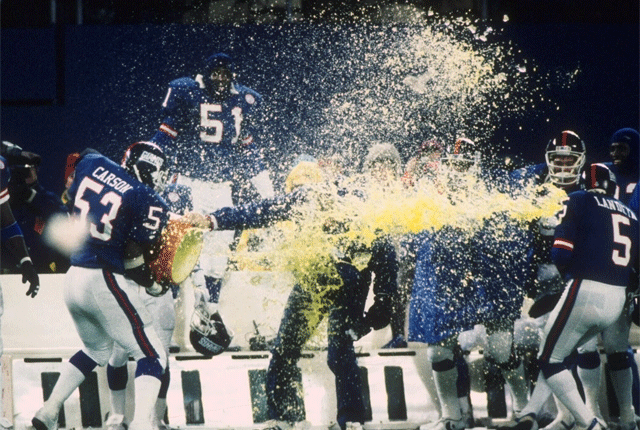 The 1986 Giants celebrated on the field…Parcells was showered in Gatorade and Belichick finally beat Eli in a big game.

Did the Bleed Big Blue Simulator get it right?…. Or should we take a sledgehammer to that Sumofabitch?….