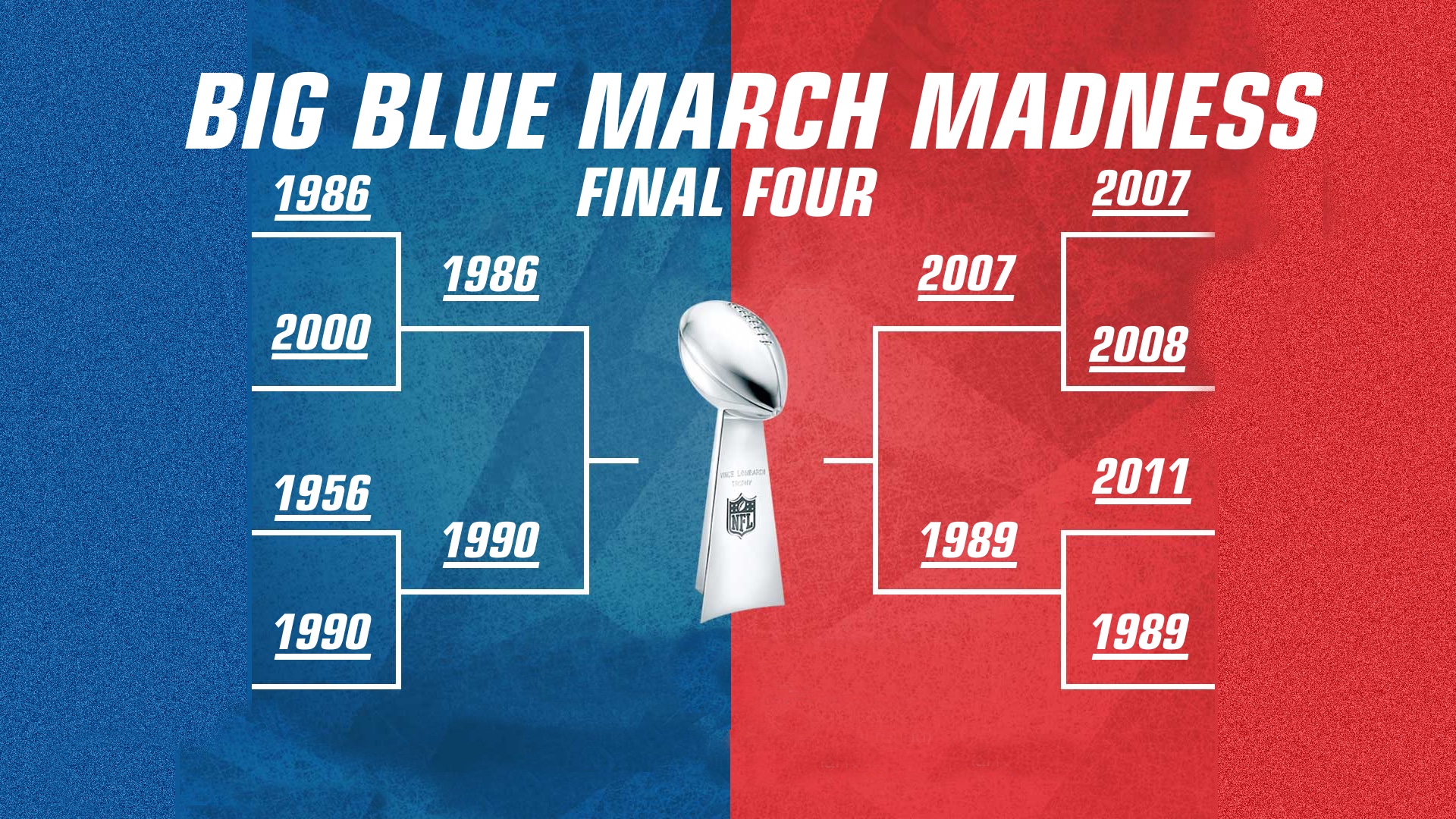 We put history to the test with the last post by taking the eight best G-Men teams of all time, in our humble opinions, and putting them up against each other in a Bleed Big Blue March Madness Fantast Extravaganza.

When the smoked cleared from round 1, we still had 4 teams still standing. Here are your Final Four match-ups,

Again, we poured a shit ton of data into the Bleed Big Simulator…. The results are as followed.

How did we get here? Read the 1st round breakdown of Big Blue March Madness.

Right from the get go Strahan, Osi and Tuck battered Phil Simms and the ’89 offense. Simms was sacked twice on the opening drive alone.

’07 Eli on the other hand came out sharp. He hit Burress for 16 yards. On the next play, Toomer for 12. Then after back to back 4 yard runs by Jacobs, Eli caught the 89 defense gambling. On a 3rd and 2 from their own 43, Eli avoided a blitzing Carl Banks by stepping up in the pocket, and then avoided a penetrating Gary Reasons by sliding to his left and leading Steve Smith beautifully on a little crossing pattern. Smith took the pass in stride beating safety Myron Guyton and streaked down the right sideline for a 57 yard TD.

The 89 team took the field with ten minutes left in the 2nd quarter trailing 7-0. Simms go hot for the rest of the 2nd and went 12-15 over the final ten minutes, including TD’s to Bavaro who beat Antonio Pierce clean on a post route. Following a 3 and out, Simms led a 5 play 50 yard drive to put the 89’ers up 14-7 when he hit Lionel Manual, who beat Aaron Ross like a drum on a 15 yard TD right before halftime.

Strahan, Osi and Tuck dominated the 3rd quarter, allowing 4 total yards by the 89 team’s offense. Eli and the 07’s held the ball for much of the 3rd quarter, but could not find their way into the end zone. Instead, they settled for two Lawrence Tynes field goals, one from 45 yards out and another from 28 yards away.

Simms came out in the 4th and the 89’ers marched up the field consuming clock and converting 3rd down after 3rd down. The 10 minute drive stalled in the red zone and Raul Allegre knocked in an 18 yard FG and with just under 5 minutes left, the 89’ers held a 17-13 advantage.

Cue ’07 Manning. He lives for these moments.

Eli led the Giants down the field as the clock ticked away. He found Burress and then Shockey to convert back to back 4th downs. Scrambled for a first on a 3rd and 6, and with 33 seconds left Eli found Toomer in the back of the end zone for the game winning TD.

On the opening play from scrimmage, Simms was blasted by LT and Banks on a play action attempt and came down hard on his throwing shoulder. In came Jeff Hostetler.

Hostetler struggled for much of the 1st quarter, and the 86’ers, taking advantage of great field position took a 10-0 lead after a Allegre FG from 41 yards away, and a 22 yard TD strike from Simms to Bobby Johnson.

Hostetler narrowed the gap right before halftime. He hit Mark Ingram on a key 3rd down to get the drive started. Hostetler then scrambled away and found Dave Megget for a 16 yard pick up. The next play was a play action that caught the 86ers keying on OJ Anderson. Hostetler executed a gorgeous fake and hit Stephen Baker for a 1st down and more on a 38 yard play to the 1 yard line. OJ Anderson pounded his way in from the one and at halftime it was the 10-7, the 86ers on top.

The 86ers went on to dominate the rest of the game. The 86 team gave up 2 first downs the entire 2nd half sacking Hostetler 4 times. Simms on the other hand completed 15 of 20 passes in the 2nd half, including TD’s to Maurice Carthon and Lionel Manual. Joe Morris added a 5 yard run in the 4th and the 86ers won going away, 31-7.

And just like that we have one more game to go for Big Blue March Madness. We started with eight and we are left with two.