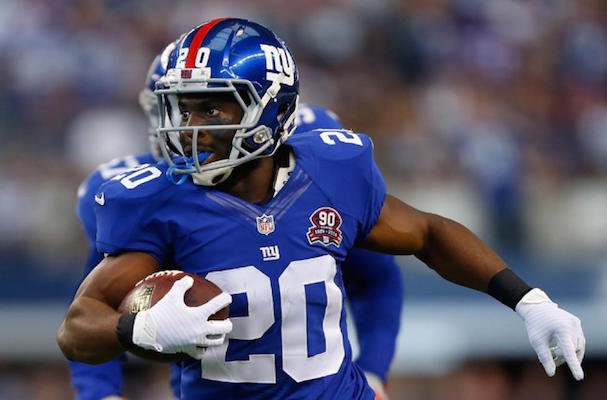 Five Giants Players To Keep Your Eyes On

As Brady, Belicheck and the Ball Boy “derail” the Super Bowl with “deflate gate” let’s focus on one of the true culprits that “derailed” the Giants 2014 season-injuries. The truth be told Big Blue led the NFL in players on injured reserve 20 and “man games lost” xover 100. Besides turnovers probably the last statistic a team wants to lead the league. The “big black & blue” were down big players for long stretches of time.

The “past is prologue”- and there are five Giants players to keep your eyes on big time for Big Blue to be big time in 2015. Victor Cruz, Jon Beason, Robert Ayers, Geoff Schwartz and Prince Amukamara, these guys are starters, game changers and veterans that the Giants expected to be big in 2014 and need going forward.

At the top of the list Victor Cruz, we all know what he can do for the Giants-change a season with 99 yard catch and run (run Forest run) against the Jets. Salsa his way to the end zone and keep the chains moving. Seriously he is an 80 receptions and 1,000 yard receiver yearly. When he tore his knee up in Philly the Giants were 3-2…they would not win another game for over a month.  Until “OBJ” would emerge- coincidence…I think not. Considering Cruz’s injury don’t expect him to be himself until game 8 in 2015. It takes these guys one calendar year to truly recover…see All-Star John Tavares of the Islanders.  But the visual of Cruz and OBJ on opposite sides has to be giving Big D, the Skins and the Birds nightmares.

Jon Beason could be the “beast of the east” for the defense and Steve Spagnoulo.  When this guy is healthy he is an absolute stopper in the middle. He can simply man up and guarantee 100 plus tackles a season. However, he just seems to be a constant member of the “tub club”. He needs a big 2015 season because he not getting younger and Giants will not wait much longer. Look for the Giants to draft a middle linebacker in the mid to late rounds of the draft in April.

Robert Ayers – credit to Jerry Reese for signing the hometown boy (Jersey City) last offseason. In 5 seasons Ayers is just coming into his prime and has shown tremendous consistency. He is the exactly the kind of defensive lineman a team like the Giant’s needs. He was just getting going when he went down against Jacksonville (the worst loss of the season). Ayers had pushed his way to 5 sacks in 12 games on a poor defense. Look for a big, big year in 2015.

Geoff Schwartz– such a disappointing season- brought in as free-agent in 2014 by Jerry Reese to be a big and I mean big lineman (6 foot 6, 340 pounds) and give Eli time…none of that happened. The Giants are his fourth team in 6 seasons previously with Carolina, Minnesota and Kansas City. All summer and first 10 games of the season fought injury problems. Finally got back in the line-up for two games and yet again was put on IR after the Jags game with an “ankle/tendon injury”. Needs a full season on the field – or will be his last in big city.

Prince Amukamara-the secondary was supposed to be the big strength for the Giants defense but it crashed and burned. Prince was having a solid season when he went down in week eight with 37 solo tackles, 3 interceptions and 11 blocked passes. This guy is the closest thing the Giants have to a “shut down” corner. I really like this guy a lot and so does Antrel Rolle. He is not afraid to tackle and never seems to be out of position. Look for Prince and the Revolution in the secondary next year!

Prediction time– Super Bowl Seattle 31- Patriots 28. The triple B’s “deflated” their own season. Besides Marshawn Lynch will be MVP with over 100 yards rushing and 2 touchdowns.

Big Blue defense will rank in the top 1/3 in 2015…somewhere between 12th and 8th…wih Steve Spagnoulo as defensive coordinator.

All stats courtesy of Giants.com, NJ.com and Fox.com