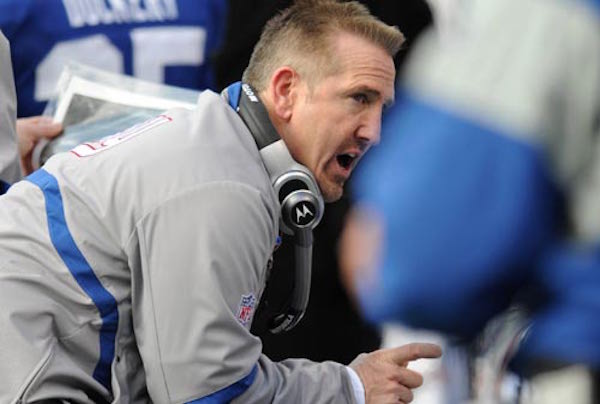 Is Spagnuolo The Right Choice For The Giants?

The NY Giants ended their season with a 6-10 record thus not qualifying for the playoffs. They’ve had some ups and downs with injuries through out the year. The most notable being one of their best wide receivers, Victor Cruz, . Sadly, one can’t blame their poor performance all on injuries; we can’t forget Eli threw a few interceptions this season. The Giants started to make some moves in the post season in hopes to improve their team. One move was the firing of Defensive Coordinator.

The firing of Defensive Coordinator, Perry Fewell, who was with the Giants for 5 years , to some, was not surprising. This season the NYG Defense was ranked twenty-eighth in yards allowed per game and twenty-first for points allowed each game*. When Fewell started with Giants in 2010, they moved up in rank from 13th to 7th in the NFL Defensive ranking. In 2011, the NY Giants were at their best;: They were ranked 4th in creating turnovers.* It also doesn’t hurt to have Jason Pierre Paul, and Justin Tuck commanding this defense and leading with sacks. The Giants were incredible in red zone that year as well, which helped them go to win another Superbowl. Unfortunately, this decline resulted in getting rid Fewell in order to make path for a new defense.

The Giants decided to bring back former defensive coordinator, Steve Spagnuolo. Spagnuolo defense helped win the GIants the Superbowl in 2007- 2008. While many have saw this moment as possibly, hopefully, reviving the Superbowl team we had back in 2007 while others feel that it is the wrong decision. Years have gone by and defenses changed. Spagnuolo moved on to be head coach of the Rams but did not have much success. Afterwords, in 2012,he moved on to be Defensive Coordinate of the Saints, and their defense was ranked one of the lowest ( aside from extenuating circumstances beyond his control that resulted in the team not doing so well).

Some would argue this seems like a move of desperation , in hopes of recreating a defense they had during their Superbowl season, but one problem: different time, different defenses.  Some sports analysis  argue that this choice was wrong in that the Giants shouldn’t be looking to redo something that happened in the past, but look forward to building a team for the future. This is not to say that Spagnuolo could not create a powerful defense, but i think, on the surface, this makes some Giants fans and experts a little uneasy.  I  agree with some sports reporters that claim that this was shoddy, hurry- up and -fix- it type of hire.   The Giants should do what they had done with the offensive and look to refresh it. Although it was a rocky start, down the line, the Offensive  will gel together and  become familiar with this new scheme ( but that can also be achieved by finding the talent to support it).

Couch Coughlin , probably anticipating the criticism, stated that Spagnuolo was a coach that had learned and evolved. He believe his coaching would be different than years past. Suffice to say, Coughlin believes in Spagnuolo and believes that a coach that learns and progresses in his coaching techniques,etc would be a great addition. I can’t disagree with, this and it is true that Spagnuolo has worked and learned from different type of defenses and coaches. This information is not invaluable, and we can hope that Spagnuolo can look at this defense and reshape it. The other challenge would be getting to know the different players and their style of play, especially a bunch of players that would be new to him.

It remains to be seen how Spagnuolo can change this defense around. Will he bring them back to our Superbowl glory days?

Is Spagnuolo The Right Choice For The Giants? was written by Guest blogger Angela Whiting Please leave feedback in the comment field below, I would love to know what you think.