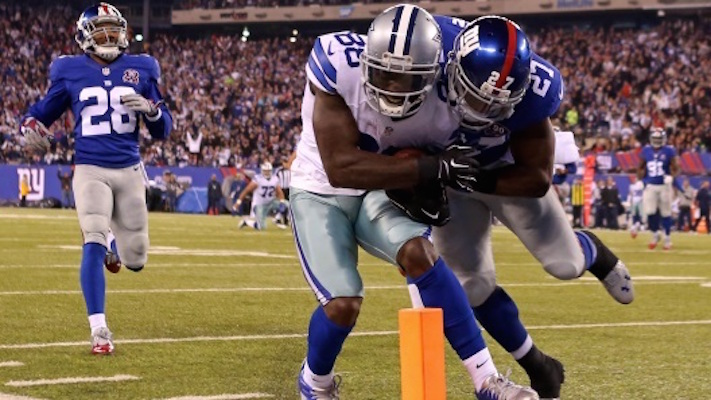 After a five-game losing streak in which there was no continuity on either side of the ball with lack of execution and a visible scarcity of talent, the New York Giants faced a tough opponent when a well-rested Dallas Cowboys team came to town. At 3-7 facing a far superior 7-3 Cowboys team, the Giants needed a fast start and a spark to revitalize the team and give them a chance to win— and they got both thanks to the exploits of an explosive, dynamite rookie wide receiver from LSU. However, his feats were not enough to overcome the Giants’ self-inflicted mistakes and come up with a Giant Disappointment.
​
As soon as the game started, the Giants forced a three-and-out thanks to tight coverage by the secondary and pressure on quarterback Tony Romo. Coming off of a brutal display against the 49ers, the offense sought to flip the script early. On their first possession, they methodically moved the ball down the field in a 13 play, 80-yard drive, converting all of their third downs on the possession. They targeted talented rookie Odell Beckham Jr. early and often, with he and Manning displaying great chemistry. In the red zone, where they had such difficulty scoring last week, the impressive drive culminated in a 3-yard touchdown pass to Beckham Jr., and the Giants quickly jumped ahead. As a fast start was imperative to pulling off the upset, the outlook was good for New York— and it only got better.
​
Up 7-3, with the Giants driving again, Odell Beckham Jr. connected with Manning for an awe-inspiring, impossible 43-yard touchdown catch that is being deemed “the greatest catch ever made.” Beckham had beaten cornerback Brandon Carr down the sideline, forcing Carr to attempt to pull Beckham down to prevent the catch. As Beckham was falling backwards, he reached back with is left hand, which was the inside hand on the play further increasing the difficulty, and with his arm fully extended plucked the ball with only three fingers and brought the ball into his body. This unbelievable play sent a roar throughout the stadium and frenzy throughout the country as athletes and icons that witnessed the play all across the nation recognized its brilliance. Injured Giants wide receiver Victor Cruz even tweeted: “That’s the best catch I’ve ever seen.” The miraculous play not only invigorated the crowd and the team, it gave them a 14-3 lead, and all of the momentum. The Giants then took a 21-10 lead into the half, with a great chance to upset the visiting Cowboys.

However, the team that began the season 3-7, the team that consistently lacked execution with self-inflicted mistakes, returned once again. The Cowboys came out of the locker room with renewed energy and the Giants did not. They attempted to revitalize the offensive line that played so poorly last week by replacing rookie guard Weston Richburg, who had started the first ten games of the season, with veteran Adam Snyder and inserted formerly injured Geoff Schwartz at right tackle. In the first half the line did a formidable job in pass protection. But, the line could not open up holes for the ground game in the second half, and gave Eli Manning no time to throw. The Cowboys scored a touchdown to cut the lead to 21-17, but the Giants were driving again. Eli Manning dropped back and overthrew wide-open receiver Preston Parker in the middle of the field who would have scored an easy touchdown if the ball were placed better and deflected off of his fingertips into safety Barry Church’s arms who returned it 45 yards to midfield. Instead of scoring and increasing the lead to 28-17, the Giants made yet another costly mistake that lead to a 31-yard touchdown pass to Dez Bryant and now a 24-21 deficit.

Down by 3, the Giants got the ball back on their own seven-yard line with only 9:12 left in the game. Eli Manning did not panic. He led the offense on a 14-play, 93-yard drive that culminated in an Adrien Robinson 1-yard pass from Manning on a play action rollout throw on third down. Last week, the Giants failed to score a touchdown in four plays on the goal line to win the game. However, they finally were able to score in the red zone late in the game against the Cowboys, and with 3:00 left in the game, they took a 28-24 lead. But, the defense let the team down once again.

With only minutes to score, Tony Romo and the offense marched the ball down field and were on the cusp of scoring. In past seasons, when the defense needed a stop to ensure victory, somebody stepped up and made a play to seal the win. However, when Tony Romo dropped back to pass with only one minute left on the clock, the Giants defensive line was unable to get any pressure on him at all, allowing him over seven seconds of time in the pocket to throw, and he found Dez Bryant in the back of the end zone to take a 31-28 lead that the Cowboys would not relinquish. The Giants could not convert on 4th down when they received the ball, ending the game in stunning fashion for New York for the second straight week.

This game started so promisingly for New York, with tremendous optimism and hope for the future with the emergence of Odell Beckham Jr. as a star in this league. There were so many reasons for the Giants to win. But, like numerous other times in this catastrophic season, they made fewer plays made to win the game than the mistakes made to lose it. The Cowboys made a stop when they had to, and the Giants did not. And once again, for the sixth straight week, the Giants are left scratching their heads wondering what they have to do to secure victory, and what the future holds for this franchise.