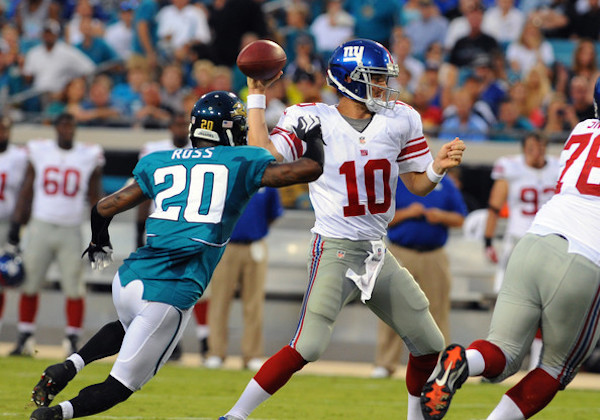 State Your Case Giants Vs Jaguars

The Giants face off against the Jaguars this week. We debated with Luke Sims who blogs for BlackandTeal.com on how it will play out. Tim Merritt will give the breakdown for our struggling Gmen.

The Giants are not playing well enough to take anyone lightly. I don’t think the Giants will overlook the Jags this week, here is why the giants get the win.

The Giants are playing to save Coughlin’s job:

I know the Giants are on a 6 game losing streak but this week they face the 1 win Jags. The Giants are having a tough year but the Jags are by far a worse team. The Giants know they are out of the playoffs but they have been in the past 2 games against the 49ers and Cowboys with chances to win so they are putting effort in. They know a loss to the Jags puts this season from just a rebuilding season to a disastrous/ inexcusable one. These players seem to love Tom Coughlin and this organization but with a loss to the Jags that could seal a Coughlin firing at the end of the season. That being said the Giants will be prepared and ready to play to show they are the better team while also letting the want to end this losing streak motivate them.
The Giants will play better to save Coughlin = Giants win

Players will be playing to save their jobs:

Playoffs not being possible with 5 games left in the season means the evaluation to see who will be on the team the next year starts sooner. The rebuilding started this past offseason and will continue in this one. The big question has to be answered who is worth the money. Is JPP? Is William Beatty? Is Antrelle Rolle? The Giants also have to evaluate the youth on the team to see where they will go in the draft and free agency. All players know this business side so if they want to continue playing with the Giants or to get another chance with another team, they will be giving their full effort. Also if they want to keep their jobs and keep management on their side they can’t lost to the 1 win Jags.
Jobs being on the line = Giants win

The Giants were moving the ball against the Cowboys and now this week they play the Jags who are one of the worst defenses in the league. Everyone already knows about Odell Beckham Jr. and that talent he is just tapping into so he is a huge boost for the offense. Odell getting so much attention opens up everything else in the offense. Rashad Jennings/ Andre Williams will see less people in the box so the running lanes will be open. If they are doubling Odell then Randle/ Donnell/ Parker have a better chance of seeing opportunities. Also single coverage on Odell will lead to him winning that battle and maybe making more amazing catches because there is not one person on the Jags that can take away ODB by himself.
Odell Beckham Jr. boosting the Giants offense = Giants win

The Jags Defense is for Real

Last week the Jaguars’ defense had its best showing of the season. They had five sacks and forced fumbles in the first half against the Colts. That’s not an abberation either. The Jaguars are racking up sacks this season (38 and counting) and their front four in particular are able to change games. The defense’s biggest weakness is the deep ball, but Eli Manning is only completing 28.3% of his passes over 20 yards or more so the Jaguars may not be in trouble on that front. Now the defense really needs the offense to stay on the field longer so they can get some rest and not be beaten down, which leads me to…

Blake Bortles had arguably his worst game of his short career last week against the Indianapolis Colts. He mustered up a meager 146 yards (he put up 223 yards in one half against the same defense in week three), no touchdowns, and an interception. He did this while being sacked four times and his receivers dropping four passes (the most since he’s been starting).

It looked like offensive coordinator Jedd Fisch put training wheels on the Jags’ offense last week and rather than helping the team out, it just hurt them as they put up only three points and failed to spark any offensive surge. Bortles has struggled with interceptions so far this season, but it’s apparent that limiting the playbook and encouraging passes on the flats to running backs isn’t the way forward. Bortles should have more freedom this week.

Denard Robinson Will Be Back on Form

Robinson had a weak game last week. The Colts stacked the line every play, willing the offense to take shots through the air. Bortles and Jedd Fisch decided not to do that and as a result, Robinson was met by defenders at the line over and over again. He averaged less than two yards per carry because of it.

Don’t expect that to continue.

Robinson was running with the best of them for the weeks up to the game against the Colts and if Blake Bortles starts passing like he does usually (i.e. without Fisch’s training wheels) then the Giants will have to respect the pass and deal with Robinson. Expect Robinson to take advantage of that. The Jags have won their only game of the season when the young running back got 20+ touches on the ground. This game will be close, or in the Jags’ favor if he gets to that number again. The Giants have given up significant rushing yards so far this season, so expect the Jaguars to lean toward running the ball this week.

All in all, it’ll be nice to have Tom Coughlin returning to Jacksonville where we had him start a franchise with excellence. This is a winnable game for both teams, but if the Jaguars play their cards right, they can definitely put the Giants away.

Giant Disappointment
Will The Giants Snap A Seven Game Losing Streak?
To Top