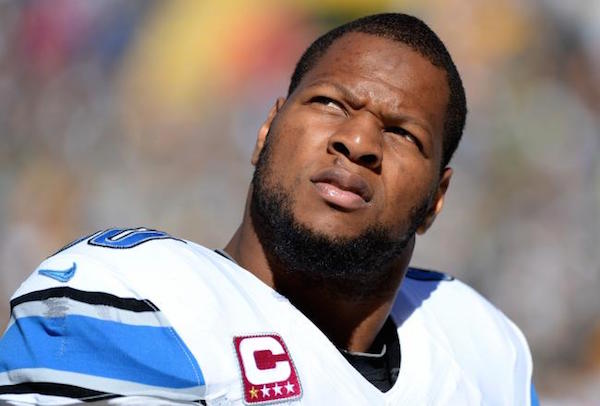 Contract talk between The Detroit Lions and defensive tackle Ndamukong Suh have remained silent. Rumors have Suh eyeing New York as a potential destination according to ESPN’s insider Adam Schefter.

Suh has told people in the past that he would love to play in New York, and the idea of it has huge appeal to him, league sources said.

If he were to take his talents to New York, either to the Jets or Giants, Suh knows how much it would mean for his brand and his profile, and it is something that if he hits the free-agent market this winter, when his contract is up, he will explore.

Considering that the Giants will enter another off season looking to retool, Suh should be potential target. Bleecher reports Mike Freeman describes the New York Giants interest as “marginal” quote below.

One of the few times I’ve ever heard the Giants and Jets agree on anything. A source on the Giants says their interest in Lions defensive tackle Ndamukong Suh is “marginal.” A source on the Jets said something similar. Both sources said this is likely Suh’s agent Jimmy Sexton trying to scare the Lions

Suh is leading The Lions to some impressive defensive rankings. No. 1 in points allowed, No. 1 in yardage versus the run and No. 2 on total yards. Suh has held all the controversies at bay this year forming a well rounded season.

Our Giants haven’t faired so well, as we all know. Another offseason of uncertainty.