State Your Case Giants Vs Cowboys 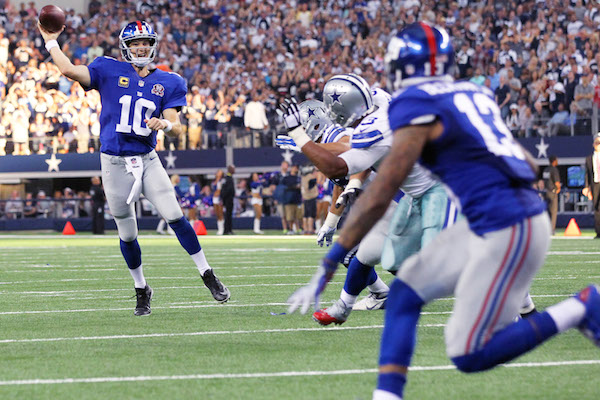 State Your Case Giants Vs Cowboys

Here we are another New York Giants football game coming upon us. I know the Giants are on a losing streak but this will end this week against the hated Dallas Cowboys which will make it that much sweeter.  Once again we reached out to Cowboysblog.net to help us break down two bitter rivals. You can find them on twitter @Cowboysblognet. Now to the breakdown.

The Giants will have a balance offense

Eli almost always plays well against Dallas. In week 7 that was the case as well when he had 3 touchdown passes. Now he did have a rough game this past week but he always bounces back. This time he will have Rashad Jennings, (which they did not have the last time against Dallas) he will help provide a more balanced attack while also proving better pass protection. Geoff Schwartz will be playing in his first game as well which should help the offensive line against a team that does not have many sacks. Eli with protection is dangerous and this is a defense that made Colt McCoy look like a pro bowler a few weeks back. Larry Donnell fumbled twice the last time these teams played which was a big reason Dallas won the game. Giants with a balance attack can control the ball longer, which keeps the Dallas offense off the field. The Giants have shown they can move the ball and score against Dallas. This week at home if they do not turn the ball over they will prove that capability again.
Balanced offensive attack with no turnovers= Giants victory

ODB the sequel: Odell Beckham is a legit number 1 WR.

Unless you are blind the one bright spot in this losing streak has been seeing what the Giants have in this young rookie WR. He has made people take notice around the league and I don’t see this momentum stopping. ODB had 2 touchdown catches in the last game in Dallas and that was with barely any practice/ game experience. Now I would think he is in better game shape along with being better mentally to take on the challenge the NFL brings. This is the first team that he will face twice, now we will see what he learned. Dallas does not have a shutdown corner to match up with Odell. (Richard Sherman learned that Odell is not scared of a good corner) Odell and Eli are just starting to get chemistry/ trust between one another so if you think he has been good so far just watch it get better. ODB will have a big night.
Odell Beckham have a big receiving night = Giants victory

Tony Romo will make a mistake.

Now stop me if you have seen this before. Dallas starting out hot then eventually showing that they aren’t as good as everyone thought. (It’s ok to overachieve but the real team shows over a full season) Just like Dallas, Tony shows when it becomes crunch time then he is prone for mistakes. I do believe Tony Romo is a good QB but everyone who has watched him play knows that at the worst possible moments that is when he turns the ball over. Tony Romo is a threat but when he is playing with a bad back that he injured again a few weeks ago, he is not the same player. If the Giants plan on winning they have to get to Romo so he is worrying about his back more than whom he should pass to. JPP got to Romo twice the last time they played and with Robert Ayers playing the way he has recently then it is possible the Giants will get to Romo or at least force him to make a mistake.
Tony Romo being mistake prone = Giants victory

The formula that helped Dallas in the first meeting will be a big piece of the formula Sunday night and that is DeMarco Murray running on the Giants defense.
The Giants defense is dead last, #32 in the NFL in rush defense and they are not getting any help with Cullen Jenkins being out. Murray rushed for 128 last game and is poised to duplicate that performance.

The Cowboys have gone full tilt since training camp, and the bye week has helped get everyone healthy. That means we’ll see hard hitting Rolando McClain and Tyrone Crawford back from injuries. Crawford had a nice game against the Giants last time and he’ll collapse the pocket along with Henry Melton from the middle.
Rookie DeMarcus Lawrence has been playing solid and look for the Cowboys to bring pressure packages when Lawrence and Melton are on the field at the same time.

Romo is still nursing his traverse process injury in his back and it’ll be something he deals with the rest of the season, but with a clean game against the Jags and the bye week, look for Romo to have his mobility back. I like the match ups the Giants will give us in the secondary.
Prince is out and he had a nice game against Dez last time. This time around, Dez could make them pay big. Either way, they may need to double team Dez which will open up the passing game for Terrance Williams and Gavin Escobar could have another breakout game against that banged up secondary.
If the Giants cannot pressure Romo, then they’ll have a long day trying to stop Romo along with the running game. All of these reasons aside, this is a divisional game and it’ll be a battle, the records are irrelevant when they match up. Should be a good game.
HeadlineOdell Beckham JrState Your CaseTony Romo
1 comment
0
FacebookTwitterPinterestRedditEmail

[…] The Giants are a lowly 3-7, but it’s still a Coughlin ran team and they never go away, this will be a battle from whistle-to-whistle. For a view from the other side, please check out BleedingBigBlue.com, we contributed a piece with them, check it out here. […]