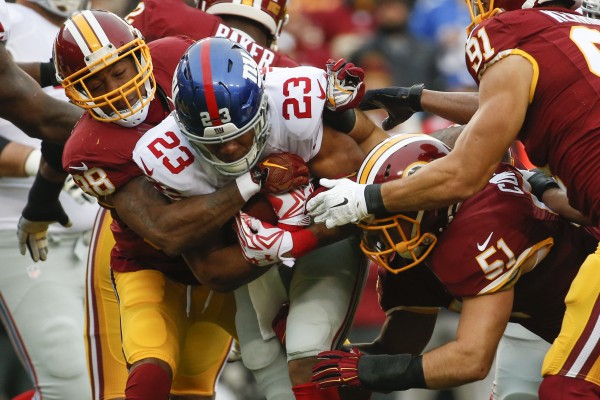 The Giants were unable to mount a come back against the Washington Redskins, as they drop to 5-6 for the season. The 20-14 loss also drops the Giants into second place in the NFC East, and currently out of a playoff spot. Below are 5 quick take always from Fed Ex field.

Were too numerous to count. Balls that should have been caught were intercepted. All too often they helped stall potential drives. Just completely unacceptable by every receiver on the team.

The Giants allow teams to hang around. Fail to play big at crucial moments. I truly believe Tom Coughlin is an excellent coach. But at some point he has to be held accountable. Now is the time to make a change. When I say now I mean – end of the season.

The Giants abandoned it way too early. Down 3-0 and 10-0 the Giants to the passing game almost exclusively. They acted like they were down 30-0 in the first half. Instead of playing smartly and working their way back into the game.

By far the worst stadium in the NFL. It is awful- poor sight lines, obstructed views, and simply behind the times. Giants fans enjoy Metlife Stadium it is by far superior in every aspect!

It was obvious that his absence severely impacted the Offense. After his injury manning was pressured constantly. Plays were often wrecked before they had a chance to develop. Sad he can’t stay on the field because when he is in the field the protection is much better.