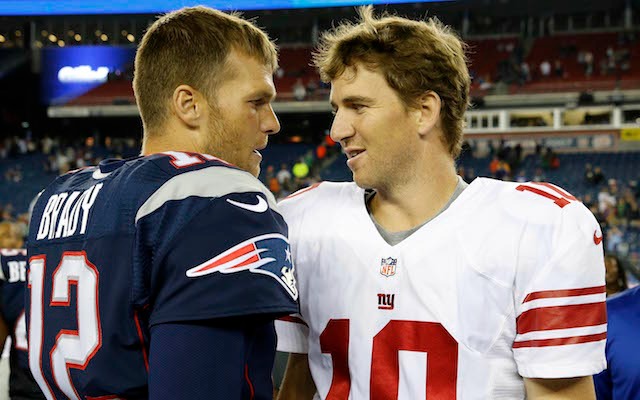 I’m not going to sugar coat it, this is not going to be in an easy win for the Giants. The New England Patriots are playing some excellent ball right now. With that being said the Giants can keep up with any team. For this weeks preview we asked patriotsgab.com (twitter.com – PatriotsGab) to help break down this match up.

Remember when Ryan Clark said Tom Brady sees Ghosts in the pocket? No team made Brady see more ghosts than the New York Giants did the past three games which is why they won. Tom Brady no longer sees ghosts in the pocket at the ripe age of 38. He can move around in the pocket much better now than he did when he was younger and he’s more accurate throwing on the run than he ever has been. You can hit him, you can pressure him, and even get five sacks in one half against him, but you won’t rock him anymore.

The Giants are one-dimensional.

The Giants, who beaten the Patriots three times in a row could run the ball, but not the 2015 Giants. They’ve struggled to run the ball this season and if they can’t get that going against the Patriots on Sunday, they could be in a world of trouble. That will allow the Patriots to focus solely on stopping the pass and pressuring Eli Manning. Expect to see a good mix of blitzes from the Patriots on Sunday because without an effective running game to back the defense off, they will pin their ears back. Of course, the Pats still have to get pressure on Eli because if they don’t, they will be vulnerable in the secondary. This Giants team can pass the ball, and they have many weapons for the defense to stop, which means they have to pressure and get home more times than not or this could be a shootout. The Giants have a top 15 passing offense and the Patriots have a top 15 passing defense, so this matchup should be fun, but still a one-dimensional offense favors the Patriots defense.

The Patriots offense is loaded.

The Patriots have no shortage of weapons on the offensive side of the ball. Edelman, Gronk, Amendola, and LaFell are all lethal, and the Pats have a run game in LeGarrette Blount and a capable pass-catcher in RB Brandon Bolden. This group will be going against one of the worst ranked passing defenses, and a 19th rank rush defense. The numbers on paper don’t favor the Giants defense at all, even though the game isn’t on paper, the eye test doesn’t look much better for the Giants against the Patriots offense either. If they can’t get to Tom Brady all four quarters, they won’t stop the offense and the Patriots will win.

For the bulk of this season we have had minimal pressure on opposing quarterbacks. Last week against the Tampa Bay Buccaneers we saw what life would be like with JPP back in the lineup. While his stat line did not look good, he was  important because he made Jamies Winston feel uncomfortable in the pocket. The Patriots are shuffling the offensive lineup to help protect Tom Brady as they have given up 18 sacks this year. If the Giants plans to upset one way is to get to Tom Brady. Keep an eye up for JPP and Robert Ayers to cause some confusion.

Numbers can be deceiving, looking at the Giants running statistics they are in the bottom half of the NFL. I would argue a  nice portion of the Giants passing plays are quick passes to Shane Vereen and Rashad Jennings in the backfeild where they extended the play. While the Giants do not possess the “Bell Cow” running back they do have 4 fresh legged backs who share the work load. Using the four backs will keep the ball in our hands and out of Tom Brady’s.

The majority of the time the Patroits win the game even before it starts. Other teams may play scared or timid, not the Giants. This is not the case with Eli Manning and Tom Coughlin leading the charge. Now I can’t say or guarantee that we will win, but I know that we will bring a fight.