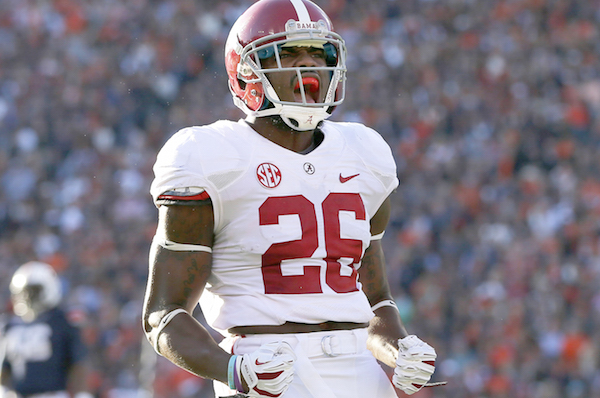 Although the Giants were hoping Iowa offensive lineman Brandon Schreff would fall to them at the 9th pick, the G-Men still got their right tackle in Miami’s Ereck Flowers. General Manager Jerry Reese knew coming into the draft that the Giants would need one more solid offensive lineman to complete what should be a formidable group of five. The Giants are hoping they got their man in the six-foot-six, 329-pound “man-child” as team director of player personnel Marc Ross described Flowers. The move will also allow Justin Pugh to move to his natural position of guard, which should help. The Giants filled a need rather than draft the best player available, which hopefully will not come back to bite them.

The Giants kicked off day two of the draft with a bang. Jerry Reese swung a team with Titans General Manager Ruston Webster to acquire the 1st pick of the 2nd round. Reese used the pick to select Alabama Safety Landon Collins who is widely regarded as the best at his position in the draft. Collins should have been a first round pick according to many, but he slid and the Giants knew he would not make it to them with the 8th pick in the 2nd round. By selecting the hard-hitting safety who was a 1st team All-SEC member, the Giants will now have Collins start alongside Nat Berhe. An excellent run defender who’s an in-the-box safety, Collins is athletic enough to cover running backs and tight ends, something the Giants have struggled with for a long time. I love this pick by Jerry Reese who needed to address the safety position.

Good luck trying to remember how to spell this guy’s name throughout the season. Owamagbe Odighizuwa is a versatile pass rusher who is going to come in and immediately provide a big presence on the defensive line. Odighizuwa is an excellent run stopper and can play on the edge or inside. Medical issues have been a concern throughout his collegiate career at UCLA but if he stays healthy, Odighizuwa will be a tremendous addition to the Giants defensive line. Many are comparing him to Justin Tuck.

After three fantastic picks from the Giants, this one is a bit of a head scratcher for me. Thompson was expected to go undrafted by many and was even shocked himself when he was picked saying “I had no clue when or if my name would get picked”. Thompson did post an impressive 4.47 40-yard dash and can play safety and corner so he is a versatile player. However, many scouts consider him to be a career special teamer. The Giants had better safety options of the board such Cedric Thompson who was picked by the Dolphins shortly after, but lets hope Reese proves us wrong.

We know how much Jerry Reese loves drafting his captains and the Giants got one here in the former UConn Huskie Geremy Davis. Davis, a big wide receiver, will be nothing more than organizational depth and will probably find himself on the practice squad to start off the year due to the plethora of receivers on the roster. Davis has trouble getting open due to his slow speed, but according to many scouts he has excellent hands. Davis will most likely have to wait a year or two before he makes an impact.

The Giants added their second offensive lineman in their 6 person draft class by adding Florida State’s Bobby Hart. A 2014 third-team All-ACC, Hart started all 14 games as a right tackle with the Seminoles and was a part of a group that lead 1st overall pick and Heisman Trophy winner Jameis Winston to a national championship. Hart struggles in pass protection but is a solid run blocker and should provide the Giants with insurance on a new look offensive line.