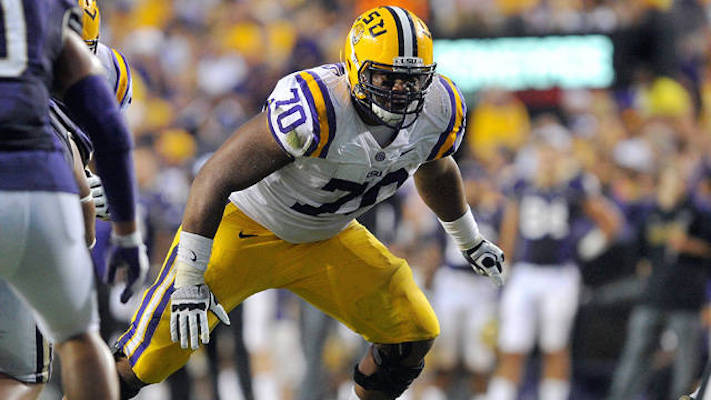 According to Jordan Rannan of NJ.com, the New York Giants are in the mix for LSU offensive lineman La’el Collins.

Collins, an undrafted free-agent, was widely considered one of the best lineman in this year’s draft but legal issues caused him to go undrafted. Collins met with the Baton Rogue police yesterday to answer questions about the murder of his ex-girlfriend and her unborn child.  After a meeting with police yesterday, Collins is no longer considered a suspect in the murders. As a result, teams are now expressing interest in the first-team-All-SEC offensive lineman, although they cannot officially begin talking with him until May 9.

General Manager Jerry Reese will likely take a long look at Collins before making any type of contract offer. The Giants are not known for signing guys who have been in legal trouble, but if Collins is in fact innocent, the move would make sense. The 6’5, 322 lbs. lineman, started all 13 games at left guard as a sophomore, then started 26 games at left tackle his junior and senior seasons.

We know Reese loves linemen who are versatile so Collins would certainly fit the Giants mold. Collins would provide excellent insurance if Geoff Schwartz has issues with injuries again or Will Beatty struggles out of the gate. Rannan also points out that Collins college teammate and current Giants star wide receiver Odell Beckham Jr. can help in bringing the big lineman to New York.

Other teams in the mix include the Eagles, Bills, Dolphins, and Saints.