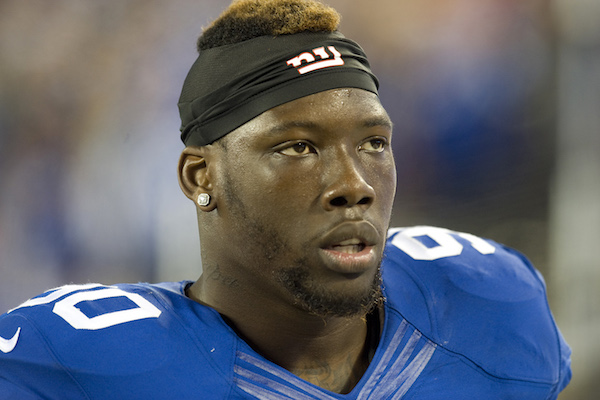 Giants star defensive end Jason Pierre-Paul injured his hand in During a 4th of July fireworks accident according to multiple reports. The extent of the injury is a tightly kept secret. When the story broke on Sunday morning, reports originally stated the injury was “severe” possibly career ending. Team officials have flown down to Florida, but are still unable to assess the current situation. JPP remains hospitalized with very little information given by his camp.

Pierre-Paul remained in Florida for this off season while attempting to work out a long term deal with the Gmen. The defensive end has not signed his franchise tag yet making things very messy. Over The Cap breaks down the current contract options.

Pierre-Paul is currently a franchise player for the Giants, but does not have an active contract with the team.  He had been hoping to negotiate a long term extension with the Giants that would pay him in excess of $14 million per season. His one year tender offer was worth $14.8 million and now it could be worth nothing.

The Giants can opt to pull the tender offer from Pierre-Paul at any time which would, in turn, allow him to become an unrestricted free agent, at a time when he may be completely unable to play football. Even if he had signed the contract he would have no protection since the guarantee in the contract is for football injury only, meaning the Giants could place him on a non-Football injury list and avoid payment completely if they so desired.

Teams and players can negotiate lower value payments to a player on NFI, as a bit of a goodwill gesture. They can also negotiate a very low value regular contract to compensate the player and keep available a route for extension during the year if the injury is not as serious as some of the rumors suggest. Such a deal would likely pay a minimum salary if on IR, PUP, NFI, or some other list and a base rate similar to the final year of his rookie contract.

The Giants withdrew their last long term deal that they offered JPP, it was estimated at $60 Million offer. He was unlikely to agree to the terms.

The #Giants pulling their long-term offer may not alter the JPP outcome. He wasn’t going to accept it anyway. https://t.co/mhgUGiECpz

This story is still developing, best of health to JPP, hope all things can be worked out. Stay tuned.