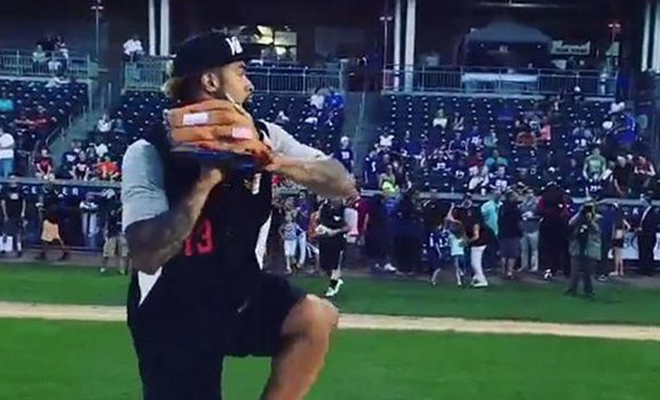 Odell Beckham Jr. is one freakish athlete. In his latest video he pitches some major heat durring a celebrity softball game in New York. This video went viral it caught the eye of a few baseball scouts.

“It’s apparent that Odell is a very gifted athlete regardless of his sport. We think that getting experience pitching to professional hitters will give him the opportunity to follow in the footsteps of Deion Sanders and Bo Jackson,” Boulders general manager Shawn Reilly said. “As we are the New York area’s only defending professional championship team, he will have the opportunity to learn in a first-class environment while still in close proximity to MetLife Stadium.”

Publicity stunt maybe, but there is some interest brewing. Check out the laser strike below.

“We were very impressed with Odell’s mechanics in the video,” said Boulders pitching coach Bobby Jones, (former Mets starter.) “He’s shown his ability to catch a ball on the gridiron and after seeing his prowess on the mound, I am optimistic that he has the tools to develop into a quality pitcher.”

The team said if Beckham is interested, he could join them for spring training next May. Here is the original article where Shawn Reilly, The Rockland Boulders General Manager, talks to The Journal News.