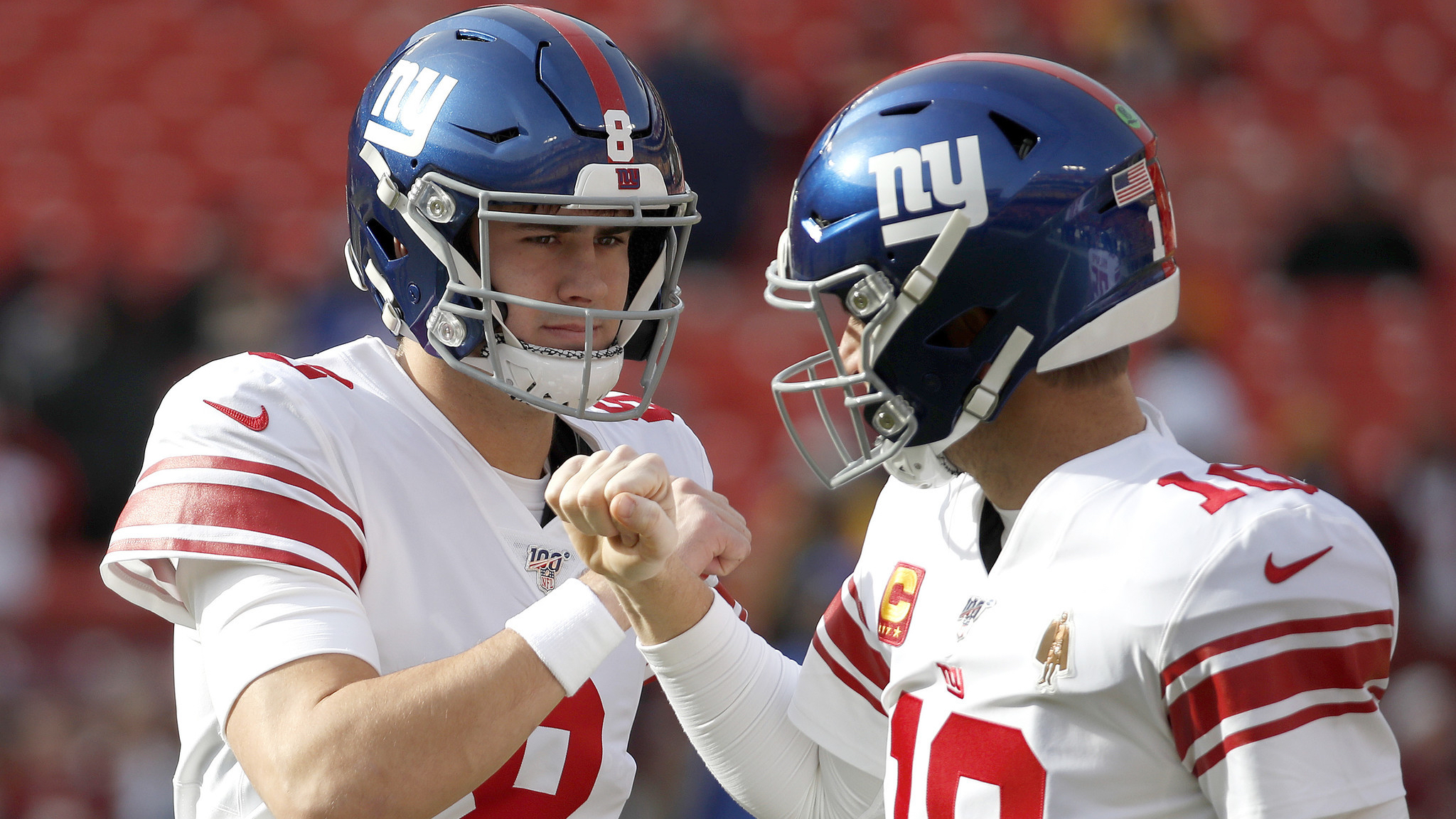 The ALL IN Challenge aims to be the world’s largest digital fundraiser in history by raising tens of millions of dollars to feed those in need. Food insecurity is a mounting issue but never more important than during COVID-19 and the unprecedented shortage of food resources our nation is facing. Among those most in need: students who rely on currently closed schools for several of their meals each week; the newly unemployed who are facing uncertain circumstances; and a vulnerable elderly population sequestered in their homes without access to food.

New York Giants & Daniel Jones
Final Bid $55,000
This is a do-or-die situation for New York Giants fans. You might want to sit down for this one. Four pregame field passes. Four club seats. Meet at midfield for the coin toss. All in the company of the one-and-only Eli Manning! That’s right—Eli is treating you and three friends to a Saturday night dinner, then giving you the ultimate New York Giants Sunday experience. You can’t spell elite without Eli. 100% of the money raised through this Game/Auction will go directly to Feeding America, Meals On Wheels, World Central Kitchen and No Kid Hungry.

Eli Manning
Final Bid $140,000.00
Eli Manning has two rings and two sweet rides as a two-time Super Bowl MVP. For his second MVP award, he drove home in a 2012 Corvette Grand Sport Convertible Centennial Edition. Now those wheels could belong to you, personally delivered to your door by the New York Giants and Ole Miss Rebels legend himself. Each year, from the original Super Bowl in 1967 until Super Bowl XLIX in 2015, the Super Bowl MVP earned the keys to a brand new car. Feel the wind in your hair as you hit the open road in an authentic Super Bowl MVP award. 100% of the money raised through this Game/Auction will go directly to Feeding America, Meals On Wheels, World Central Kitchen and No Kid Hungry.

Saquon Barkley
Final Bid $47,000.00
Hit the racks with New York Giants running back Saquon Barkley! He is inviting you and three friends to the ultimate New York Giants fan experience. Hop on a jet to NYC to watch the squad play at MetLife Stadium, where you and your friends will be given pregame access to the field to watch warmups and snap a few pics. Once the game starts, you’ll head up to your seats that just so happen to be in the box with Saquon’s family. You and your friends will be part of the fam when it’s all said and done! After the game, Saquon will take you all out to dinner at Rao’s in New York City. The next day, you’ll come work out with Saquon at the MetLife Sports Complex and see firsthand the work that is put into the game you love so much. Saquon may be young in comparison to some guys in the league, but the man is strong, and he has broken enough franchise records to prove it. Ground transportation to and from the airport in NYC is provided, as well as a two-night hotel stay in the city. 100% of the money raised through this Game/Auction will go directly to Feeding America, Meals On Wheels, World Central Kitchen and No Kid Hungry.

Michael Strahan
Final Bid Pending
We all LOVE Michael Strahan, right?! American football household name turned into national talk show host. Now is your chance to get hooked up and suited up in his go-to outfits from his tailored and athleisure from his lines, COLLECTION and MSX by Michael Strahan while attending not one but FOUR special events in Michael’s circle. Play a role in an upcoming project, dance in the VIP section of the Good Morning America Concert, attend a show taping of The $100,000 Pyramid, and ride in one of his favorite cars to enjoy a 1:1 lunch in his mancave. You’re basically Michael’s new BFF. 100% of the money raised through this Game/Auction will go directly to Feeding America, Meals On Wheels, World Central Kitchen and No Kid Hungry..

Lawrence Taylor
Final Bid Pending
Lawrence Taylor is known for his incredible career with the New York Giants, but you may not know that he loves golf so much that he was once late to a game thanks to a slow-playing foursome. LT even credits golf with helping him live a healthier lifestyle. This is your chance to enjoy your two favorite things—golf and NFL football—at once. The winner will receive a two-night stay in a cottage at the Trump National Golf Club in Bedminster, New Jersey, and you, your guest and LT will enjoy the beautiful course for a full round of golf. You’ll then join Taylor for a tasty dinner where you can listen to some great stories from his days in the NFL. On top of this great sports experience, LT is giving you $500 to spend at the Pro Shop before you head home. This is an unforgettable chance to get out on the links with an NFL MVP, so go ALL IN and don’t pass up the opportunity! 100% of the money raised through this Game/Auction will go directly to Feeding America, Meals On Wheels, World Central Kitchen and No Kid Hungry.

Justin Tuck
Final Bid $26,250.00
Justin Tuck, former Notre Dame Fighting Irish, New York Giants All-Pro, Ring of Honor member, two-time Super Bowl winner and Wharton MBA graduate, is going to take you on a Notre Dame football weekend, and he’s not leaving anything out. It all starts on the Friday before the game, when you will accompany him to the Friday night pre-rally, and he will give you a locker room and facility tour. After you high five “Play Like a Champion Today” and get a night of rest nearby the campus, Justin will pick up you and your guest for breakfast, followed by a VIP Tailgate before the same on Saturday! You’ll have on-field access pre-game, will get to pick your seats for the game, and sit with Justin Tuck himself. After a Fighting Irish victory and a rousing rendition of ”Notre Dame, Our Mother,” you, Justin, and your guest will go to Justin’s favorite restaurant in South Bend. Round trip airfare for you and a guest, and hotel accommodations are included with this package. 100% of the money raised through this Game/Auction will go directly to Feeding America, Meals On Wheels, World Central Kitchen and No Kid Hungry.

Tiki Barber
Final Bid $10,000.00
Tiki Barber seamlessly transitioned from busting through NFL defenses into busting through the media industry, and now the well-known radio and TV personality wants you to join him in the studio! Join Tiki and co-host Brandon Tierney on their nationally syndicated CBS Sports Radio show, Tiki and Tierney, which airs Monday-Friday from 3-6 p.m. ET. You’ll join Tiki and Tierney for a studio day where you’ll feature as a guest host for one three-hour show, learning the ropes of hosting a radio show with Barber and Tierney. Prepare to fire off all of your hot takes and controversial opinions alongside the man who led the New York Giants’ rushing attack for 10 years, with all of the travel and hotel accommodations on us. 100% of the money raised through this Game/Auction will go directly to Feeding America, Meals On Wheels, World Central Kitchen and No Kid Hungry.