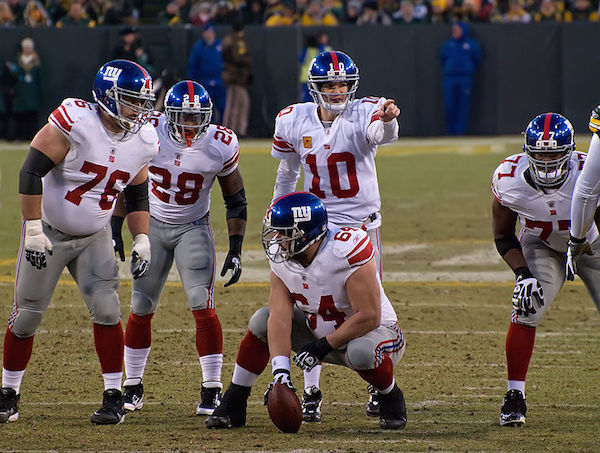 Hello fellow BleedBlue Nation,
Draft time is finally upon us, the moment we have been waiting for since the regular season has ended. The draft is going to be pivotal in helping the Giants not only to improve for next season but also to build the dominant team we would like to see for the foreseeable future. So I’ve taken some time to consider some of the Giants major area’s that could use some help. Jerry Reese has a history of drafting the B.A.P. (Best Available Player) regardless of perceived need. I agree with that strategy because it’s more important to get players that will add value and help out than fill holes with bodies, remember, there are other ways to fill holes like undrafted free agents, trades etc. It’s fun to evaluate, so let’s dive in and feel free to add comments or opinion’s so we can see what the BleedBlue nation thinks the Giants needs are going into the draft. Afterward, I will write a follow up to see how the Giants did in meeting these needs.
Offensive Line
It’s safe to say, if you watched the games last year you recognized a need here. Eli didn’t have enough time in the pocket and our running backs rarely had holes large enough to squeeze through. The reality is, although offensive line gets the least amount of credit when things are going well, they are the foundation to any winning team. We have had a few additions via free agency, the most promising in the form of Canadian footballer Brett Jones who comes in highly decorated, with the CFL’s Most Outstanding Offensive Lineman award in 2014 and winning the CFL’s most outstanding rookie award in 2013, plus he’s already won a professional championship at 24 years of age. He’s a veteran who I think will compete for a starting position and at least provide much needed depth. I think Jones is a great addition but I also believe we need to add another offensive linemen in this year’s draft to increase competition and raise the bar for the whole OL, so one or two injuries will not throw our play-off ambitions off track.

Safety
This is the other position where we have what appears to be a really big hole to fill after Antrel Rolle departed for Chicago. There is no doubt Rolle was our best safety for a long time, but he was also really expensive and though I appreciate his many contributions over the years I can’t help but feel we can improve speed and athleticism at the position at a discount. Remaining on the roster we have Nat Berhe who is tough and has shown potential. The good news here is I think this year’s draft has great depth at the position. Shaq Thomson (Wash.), L. Collins (Bama) D. Randall (xxx), and in the later rounds D. Eskridge (Syracuse), are all on my list for players who I think could help here. Check out this list of the many prospects out there in what I believe is this draft’s deepest position.
Linebacker
The Giants have a rich history at the position with L.T., Carl Banks, Pepper Johnson, and J. Armstead, to name a few, and who wouldn’t like to see us add to that tradition. M. Kiwinuka left and that leaves Kennard and Beason as our best returning players at the position. I personally like Herzlich, maybe because he beat cancer before he even made it to the NFL, but he has also made plays when he has had the chance. Casillas and JT Thomas add depth and I’d like to see another young athletic option added in the draft. Maybe a player with a high ceiling who could one day be added to the list of all-time greats at the position. With Beason getting older and our deficiency against the run last season I think Denzel Perryman (Miami) makes sense here. Miami is known for putting out great LB’s and I can’t help but think of Ray Lewis here and smile at the possibilities.
Tight End
I thought this was one of our biggest short comings going into last season, and although I feel there were other areas that were worse off during the season and L. Donnel shows great promise, this position remains a great concern. He still has a lot to improve on and the depth underneath him is not inspiring. Plus, we struggled in the Red Zone and I think a good receiving TE could help out greatly. Here’s an earlier article where a tight end solution is addressed . There are plenty of other options as well and I think we have to add a playmaker here in the draft.
Wide Receiver
As crazy as it may seem on a roster with V. Cruz and Odell Beckham Jr. on it, to say this is an area of need seems odd. However, the reality is that Cruz is coming off a serious injury and there is no guarantee he will be 100%. With R. Randle (whom many including myself find to be a big disappointment so far) next on the depth chart it wouldn’t hurt to add some talent here, if nothing else to add depth in case of injury and to help out on special teams. I think Preston Parker improved as the season went along and showed some promise and I would love to see Corey Washington start alongside ODB and Cruz, which is another point I’ve made previously. I also like the signing of free agent Dwayne Harris who is a great special teamer and could prove to be a quality WR as well, if given the chance.
So, these are what I perceive as our major needs that hopefully will be addressed during the Draft, or at least before the season begins. There are other positions, like RB, DL and CB, where we could always use more competition and improvement, but I think we can make do with who we have. Let me know what you think and as the draft concludes we can check back and see how many of these holes get filled and with whom. Keep in mind if the needs don’t get filled it’s not the end of the world, players are always improving and you never know when a sleeper will step up and have a break out year.